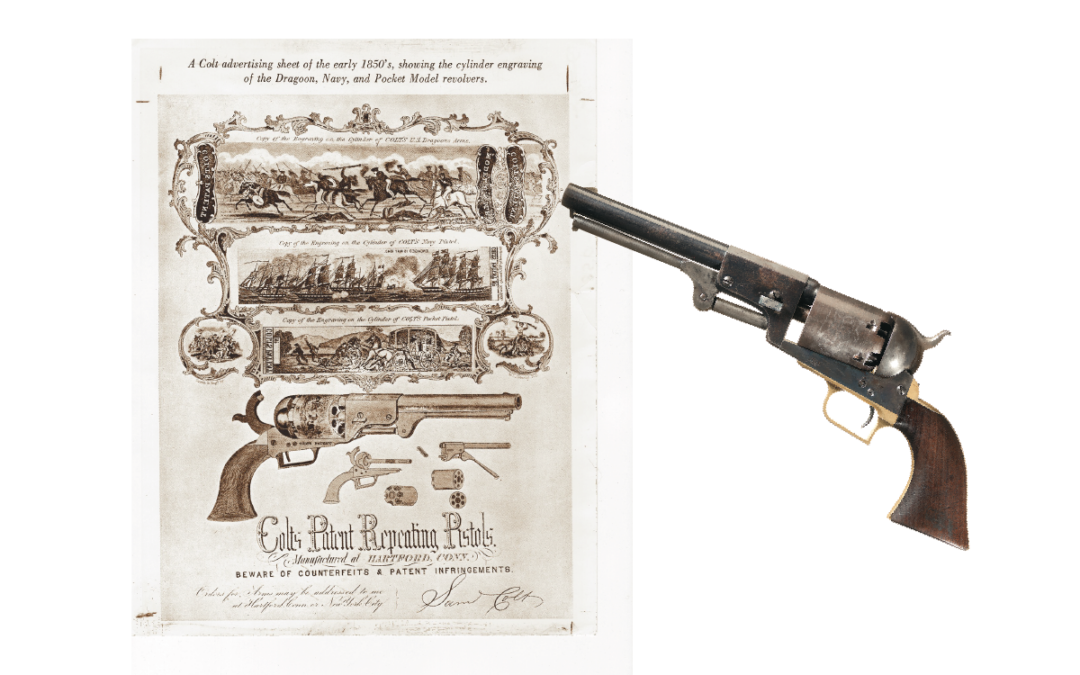 More than just decoration, these roller-die-engravings were shrewdly added by Sam Colt to his revolvers to boost sales.

Colonel Samuel Colt constantly thought of ways to promote his firearms and increase sales. One way was to place a sort of “advertisement” on each one, paying tribute to the people and events of historical significance that had used his revolvers—even though in some cases they weren’t really used.

Early Pocket and Belt Model Patersons—Colt’s first efforts, and the work of engraver Waterman Lilly Ormsby—depict variations of what is known as the Centaur cylinder scene (depending on the size of the revolver’s cylinder), which shows a centaur shooting two horsemen with a revolver. Colt’s larger No. 5 Holster Model Paterson bears an illustration of a stagecoach holdup, portraying revolver-armed passengers dispatching several highwaymen with larger-than-life revolvers. Despite the fact that stagecoach robberies were not a major problem at the time, Sam Colt played on the public’s fear of the possibility of such crimes, Colt cleverly adapted variations of this theme on the later-production 1848 Baby Dragoon Model, all 1849 Pocket Models, up through certain 1855 Root Sidehammer revolvers, and the 1862 Pocket Navies.

The massive .44 bore Walker model of 1847, the early .31-caliber 1848 Pocket Revolver and the later full-sized .44 Dragoons all utilized a panoramic view of what is popularly called the Ranger and Indian Scene. Here, mounted dragoons and Indians are engaged in a running skirmish, although the Baby Dragoon’s image is slightly abbreviated due to its smaller cylinder. This stirring roll engraving pays tribute to an actual fight between Texas Ranger Captain Jack Hays and his Rangers, and Comanche Indians. This portrayal was added in honor of Hays and his Texians, whose effective use of Samuel Colt’s Paterson revolvers were so important in the development of his arms. Legend has it that the picture is supposed to represent the fight between Hays’ Rangers and Comanches at Enchanted Rock, near present-day Fredericksburg, Texas, despite the rangers wearing stylish U.S. Dragoon-style uniforms, when, according to period accounts, they were most likely dressed in frontier civilian attire.

Interestingly, Colt’s 1851 Navy revolver, their 1860 Army Model and the 1861 Navy Model, all sport cylinder scenes of a naval conflict. If you look closely at the cylinders, you’ll find the legend “Engaged 16 May 1843,” along with the flags of the young Texas Republic and the early Mexican colors flying from the ships’ masts. This date, along with the nautical imagery, represents a seaborne battle in which Texas’s Commodore Edwin Ward Moore defeated a superior (in both number of ships and their size) fleet of Mexican warships—a crucial event in Texas’s struggle for independence. This naval scene was another shrewd move on the part of Colonel Sam, since he was purposely catering to the Texas market that had been so prosperous for him in the past. Ironically, the opposing parties in this watery engagement never got close enough to each other to use any of Colt’s revolvers or longarms. But why ruin the beauty of a thing with the truth?

Colt’s Model 1855 Sidehammer Revolver, sometimes referred to as the Colt-Root Model, bore two different roll-engravings, depending on the particulars of each example. Sidehammer ’55s with round cylinders and octagon barrels (those produced with fluted cylinders were not decorated) reveal what collectors refer to as the Cabin and Indian scene, showing an Anglo settler, armed with a brace of revolvers, warding off a band of Indians. Those Root revolvers made with round cylinders and round barrels were decorated with the familiar stagecoach holdup scene as found on the ’49 Pocket Models and other smallish Colts.

Regardless of the facts that surround the imagery Colt used on his caplock revolvers, these factory roll-engraved cylinder scenes add flavor, interest and a bit of “history”—even if just for the sake of promotion. For further reading, the author suggests Colt Cylinder Scenes, 1847-1851, The History, Process, Variations and Modern Copies, by Arthur Tobias (ColtCylinderScenes.com).