The Fastest Killer in the Old West 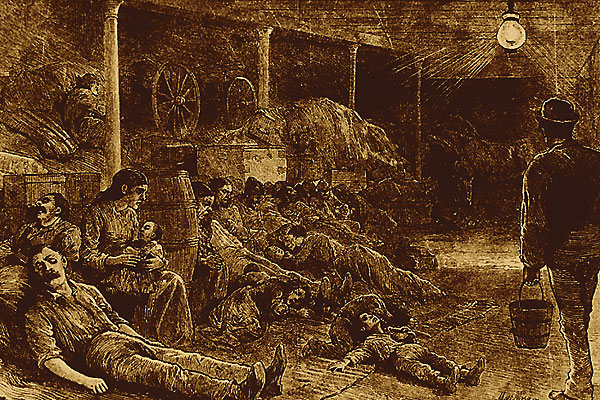 In August 1873, Dr. J.B. Van Velson, city physician for Yankton, capital of Dakota Territory, reported upon the arrival of some Russian emigrants who came directly from their port of entrance in New York City to settle temporarily in unoccupied buildings throughout the town.

These Russians were to be located “upon the farms in the territory that had been selected for them,” he wrote. The large majority of these emigrants “were of the lower classes, filthy in persons and habits” and “in the majority of instances, it was impossible to compel them to adopt any sanitary precautions in their lives; the utmost repugnance was shown to the use of privies, both sexes preferring to urinate and defecate immediately around the building in which they were located.”

Dr. Van Velson then described the multiple deaths from cholera among these people and others in Yankton, sometimes occurring after only a few hours illness. His theory, widely held by other physicians at the time, was that cholera was brought by immigrants in this country from endemic areas overseas.

The 1873 cholera epidemic in Yankton was only a small part of a greater epidemic that affected at least 18 states and territories, including the state of Texas and the Territory of Utah. The epidemic was so severe that it led to a joint resolution of Congress on March 25, 1874, authorizing an “inquiry into and report upon the causes” of this disaster. President Ulysses S. Grant submitted the 1,144-page report, authored by Dr. John M. Woodworth (supervising surgeon, U.S. Merchant Marine Hospital Service), to Congress on January 12, 1875. The more than 7,000 cases and hundreds of deaths described in this report were probably only a small fraction of the actual morbidity and mortality of this epidemic.

The association between unsanitary conditions—especially drinking water contaminated with infected human feces—and the development of cholera was basically understood in 1873 America. Physicians also realized that contact with the “cholera poison” coming from an infected patient’s vomit or diarrhea could lead to the spread of the disease. The importance of hygiene was underscored by Dr. Woodworth’s conclusion: “What vaccination is to small-pox, disinfection is to cholera.”

We know today that cholera is caused by an enteric (fecal) bacterial organism called the Vibrio cholerae. In its severe form, the disease is characterized by the sudden onset of painless, profuse, explosive, “rice water” diarrhea with nausea and vomiting. Untreated cases lead to rapid dehydration, electrolyte imbalances, kidney failure and shock (circulatory collapse) culminating in death, sometimes within a few hours. The descriptions of untreated cholera patients are among the most disturbing in the medical literature. While losing fluids from both ends of the digestive tract, the patient is afflicted with an insane thirst; in a matter of hours, his skin shrivels and ages from dehydration.

Very often, on the frontier, cholera patients suffered and died quickly without any medical attention. A cholera epidemic could wipe out 50 to 60 percent of the population of a wagon train or small settlement. Consequently, quarantine was one method widely used on the frontier to limit the spread of the disease.

The modern treatment for cholera is centered upon the immediate replenishment of fluids and electrolytes either orally, intravenously or both. Often antibiotics are administered in conjunction with rehydration therapy. Early medical treatments varied widely. Some included the administration of laudanum (opium), sulphur, sulphuric acid, spirits of camphor, turpentine, acetate of lead and even mustard plasters placed over the stomach and bowels. Some early remedies correctly included the replenishment of fluids by the ingestion of salt and sugar or even lemonade.

Compared with many other diseases, the treatment for cholera is fairly simple and effective. In this column, I usually write from the comfort of the 21st century about often obsolete and misunderstood medical problems that afflicted our predecessors in the Old West. How is it, then, that, as I write this article, the number of cholera cases in the current outbreak in Zimbabwe Africa is greater than 12,700 and the death toll stands at more than 1,100? Dr. Woodworth, where art thou?