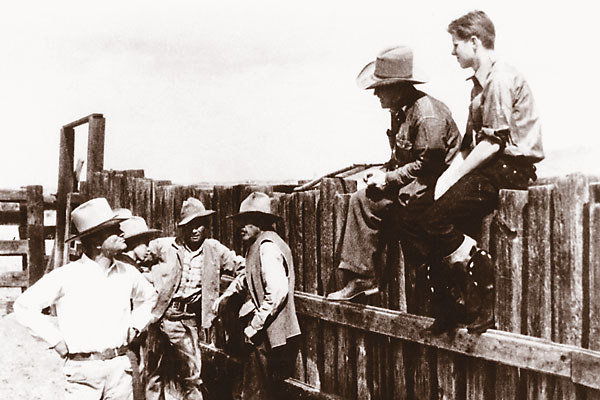 A nod of the head started an explosion at breakneck speed and thundering hooves.

Eyes focused straight ahead, beyond the horse’s ears. With dead-on aim, a rope was thrown, lassoing the calf. There was a leap off the horse, the calf was flipped to its side with another rope wrapping once, twice and a half times around the animal’s legs. Time!

Now imagine someone with just one leg roping that calf. Say what? That’s just how “Oklahoma Pete Haverty, the one-legged cowboy,” as he was billed in rodeos, did it during the 1920s-40s.

Pete was born in Oklahoma Territory in 1895, with blood poisoning costing him his left leg at the turn of the 20th century. His leg was amputated about halfway between his hip and knee. Although prosthetics like Dr. Dubois Parmlee’s, with a polycentric knee and a multi-articulated foot, were around, they were not readily available, so Pete took to using a crutch. When he was 10, the adventurous boy persuaded his father to take him along on a trail drive from southern Arizona to Kansas; his life was never the same.

“He just had a way with horses,” says his son Dell Haverty. “I don’t know how he did it with just one leg, but he did it, and he could do anything.” His father was not a man for self pity, Dell adds, “It never entered his mind, and growing up we never thought of him as being any different.”

During the Depression, Pete worked as a state livestock inspector in Benson, Arizona. His niece, Ruth Burton, remembers him driving a car on dirt roads, shifting and accelerating with his one leg. That car hauled the horse trailer, as he and his family went to rodeos. “We went nearly every weekend,” recalls Ruth, “and nearly every small town around here had [a rodeo].”

“[The rodeo organizers] paid his entrance fees to come to Salinas, California, a couple of years where he would rope exhibition,” recalls Dell. Ruth remembers how that became the family’s summer vacation. “He’d just depend on winning something to pay for it.” And he did.

Pete Haverty died at the age of 63, with his body giving out long before his spirit. “He had a good zeal for life,” says Dell. “He didn’t regret anything and didn’t cry about anything, just took everything as it came.”

Oklahoma Pete Haverty had made a name for himself, just by doing what came naturally to him with a horse, a rope and a will to win.