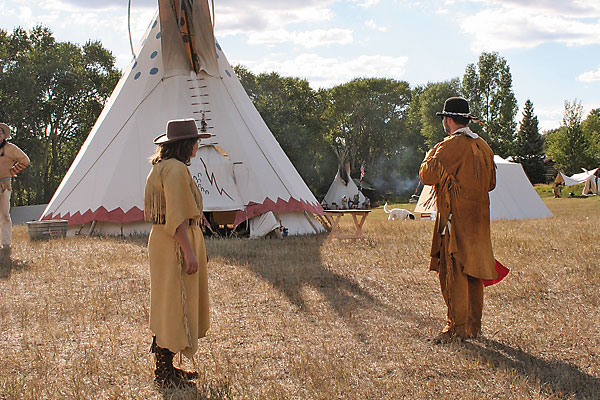 Narcissa had entered into a marriage of convenience with Dr. Marcus Whitman to fulfill her lifelong desire to serve a mission.

Traveling with her husband to what would become their mission among the Cayuse Indians, she was accompanied by Eliza Spalding, wife of Rev. Henry Spalding.

These two missionary wives were the first white women to cross the Rocky Mountains, accompanied by a fur brigade and their missionary husbands in 1836. Their journey across the West to their new homes in eastern Washington and northern Idaho demonstrated to people in the eastern United States that white women could make the journey of hundreds of miles, eventually inspiring the great overland migration to Oregon.

Narcissa and her husband established and operated the Whitman Mission, near present-day Walla Walla, Washington, until their deaths at the hands of Indians in 1847. Eliza Spalding and her husband managed the Lapwai Mission in Spalding, Idaho.

Following a hasty wedding in Angelica, New York, because they needed to get on the road, the Whitmans set off for Cincinnati, Ohio, where they joined the Spaldings. The two couples then struck out for St. Louis, Missouri, where they joined missionary volunteer William Gray, three additional missionaries headed for the Pawnee villages and five Nez Perce youths. They had hoped to travel with a fur caravan, but it had already departed, leaving them rushing to catch up.

We will begin following these missionary wives in St. Louis, a place known as the “gateway to the West.” An excellent starting point is at the Museum of Westward Expansion and the St. Louis Arch.

Narcissa described St Louis: “The buildings are not splendid, many of them are uncouthly constructed, and it has the appearance of a city going to decay.” This city at the time was rough with its mixture of Kentucky hunters, French Creoles, Canadian fur trappers and merchants who had a broad assortment of goods.

The party departed St. Louis by steamboat, traveled through Liberty and Independence, then turned north past St. Joseph before heading overland from the Otoe Mission near Bellevue, Nebraska. Here they found that the fur caravan had already started for the rendezvous and was several days ahead of the missionary party. Knowing they must travel with the traders in order to have a more direct route to their destination, the missionaries pushed on, traveling up to 60 miles a day in long, grueling trips that, as Dr. Whitman noted, “tested the abilities of our ladies.” But the concerted effort paid off as they overtook the fur caravan. In crossing the plains, the missionaries had two wagons, a light Dearborn that belonged to Eliza Spalding, which was used by both missionary couples, and a freight wagon hauling goods and supplies.

To follow their general route from St. Louis, Missouri, follow I-70 west to Independence. Take the time to visit Independence Square, the recognized genesis of the Oregon Trail, and also the National Frontier Trails Museum.

Leaving Independence, pass through Liberty then travel north on I-29 to St. Joseph, another jumping off point for travelers headed to Oregon Country.  Continue north to Council Bluffs, Iowa, before turning west on Interstate 80, which passes north of Bellevue, Nebraska.

The missionary party and fur caravan eventually met up and followed the Platte River west. To track them, take I-80 through to Kearney, where I recommend a stop at the Great Platte River Road Archway and a visit to Fort Kearny, a military post established just over a decade after the Whitman-Spalding women crossed through this area.

The women found it “awkward work to bake out of doors at first” but soon became “accustomed to it.” They stopped for noon breaks and by the time they had reached central Nebraska, they had used most of their supply of flour, retaining only enough to thicken the broth that came from cooking buffalo.

Our route takes us from Fort Kearny west along the Platte River (I suggest driving on U.S. 30 rather than I-80). Eliza described this region’s “majestic sand bluffs” and “extensive plains,” noting the prairie was covered with “delightful scenery to the eye of the traveler.” Fortunately for the party, buffalo herds were plentiful, so they had food. While Narcissa found the meat “relishes well,” Eliza did not fare so well and was “quite sick” from the repetitive diet.

Near North Platte, make a stop at Sioux Lookout, a few miles west of Fort McPherson and the highest point in Lincoln County. This prominent landmark on the overland trails is named thus because the Sioux reportedly scouted the Oregon Trail from this overlook.

Just west of Ogallala, our route angles northwest on U.S. 26, traveling through Ash Hollow and the North Platte River Valley toward Scotts Bluff. Take the time to walk the trails at Windlass Hill and to view the exhibits at the Chimney Rock Visitor’s Center before indulging in another break at Scotts Bluff National Monument. There you will find a stunning collection of artwork by noted photographer William Henry Jackson, who, at age 81, began a new career painting the fur trade, California’s Gold Rush and the Oregon Trail.

From Scotts Bluff (located in Gering and just south of the town of Scottsbluff), continue west to the next great trail site: Fort Laramie. This Wyoming post was not in place when the Whitman-Spalding party passed through, but an earlier establishment—a fur trade post that originated as Fort John and later became Fort William—served travelers.

At Fort William the fur caravan left its wagons and repacked the supplies onto horses and mules. The missionaries abandoned their large wagon too, putting as much as they could on the lighter Dearborn wagon. From this point to their missions, the two women would ride horseback on the sidesaddles they had brought with them for that purpose.

Our route continues west on U.S. 26 and then northwest on I-25 to Casper, where I highly recommend a visit to both Fort Caspar and the National Historic Trail Interpretive Center. If you want to get a sense of how it felt to travel across the prairie in the 19th century, climb aboard the stagecoach at the trail center.

The Oregon Trail and the route the missionary-fur caravan took veered away from the North Platte River at what is now Casper. In a two-day, nearly 60-mile crossing, the group struck out for the Sweetwater River. Although they no doubt passed Independence Rock, in their day, it was not the landmark register of emigrant names that it later became and did not warrant any particular attention. They reached South Pass on July 4, 1836, and were coming very close to the fur rendezvous.

In 1906, when trail veteran Ezra Meeker began marking the Oregon Trail, he placed a monument at South Pass recognizing the crossing by Eliza Spalding and Narcissa Whitman. It is located on one segment of the trail through the broad open pass, although the missionary party is believed to have crossed the Continental Divide farther to the north on another of the trail segments. That day Eliza wrote in her diary, “crossed a ridge of land today called the divide; which separated the waters that flow into the Atlantic from those that flow into the Pacific.”

Rendezvous On the Green

The gradual ascent to the divide may have made the crossing seem unremarkable, but almost certainly when the fur caravan and missionary party arrived at the fur rendezvous on the Green River at a place north of today’s Pinedale, Wyoming, everyone likely felt a measure of excitement. Rendezvous was a raucous gathering of mountain trappers and traders plus Indians of various tribes.

The appearance of the two white women must have been a reminder of home for the mountain men and a surprise to the Indians. When the westbound party hove into sight, a welcoming party raced out to greet it, raising high-spirited whoops and brandishing weapons that they fired into the air. This exuberance of a mountain greeting is something you can experience each year during the annual Green River Rendezvous held in mid-July in the Pinedale area. To learn more about the rendezvous and the mountain men, visit the Museum of the Mountain Man in Pinedale.

Nez Perce guides took the missionary party on west from the Rendezvous across western Wyoming and into Idaho. To see rendezvous country, travel north from Farson on U.S. 191, to Pinedale and Daniel. Then take U.S. 189 southwest to Kemmerer, picking up Highway 30, which will take you across the Bear River Divide and into Idaho. A stop at the California/Oregon Trail National Trail Interpretive Center in Montpelier is recommended. Then follow U.S. 30 northwest through Lava Hot Springs (a good place for a soak or swim) and take I-84 north to Pocatello for a stop at Fort Hall, another re-created fur trade-era post.

Hudson’s Bay Company trader Nathaniel Wyeth established Fort Hall in 1834 on the Portneuf River of southeastern Idaho. A day before reaching Fort Hall, an axle on the wagon broke, leading Dr. Whitman to make modifications and turn it into a two-wheeled cart (to his wife’s chagrin; she would have left the wagon behind).

The missionaries had a long, hot crossing as they traversed the Snake River Plain. Our route continues west on I-84 through Twin Falls, Boise and Nampa, Idaho, before leaving the Snake River at Farewell Bend, Oregon. Continue across eastern Oregon and toward the Blue Mountains, where, along the southeastern flank of the range, you’ll find Baker City, home to the National Historic Oregon Trail Interpretive Center.

When you cross the Blues and reach Pendleton, take route 11 north to Walla Walla, Washington, site of the Whitman Mission—Waiilatpu—the Place of the Rye Grass, which Marcus and Narcissa established to serve the Cayuses.

Henry and Eliza Spalding turned back to the east, eventually following the Clearwater River to its confluence with Lapwai Creek. There they established a mission they called Lapwai, known to the Indians as the Place of the Butterflies; it is also known as the Spalding mission. It lay in the heart of Nez Perce country at a site long used as a tribal winter camp. To reach their mission, drive east on U.S. 12 through Clarkston, Washington, and Lewiston, Idaho, and on to Spalding.

While the Spalding Mission at Lapwai continued for many years, the Whitman Mission had a shorter life span. On November 29, 1847, following an outbreak of measles that killed many tribal members, the Cayuses rose against the doctor and his wife, killing them plus nine other people and taking many mission residents, including women and children, captive. Today both the Whitman Mission and the Spalding Mission are National Historic Sites, the latter a feature of the Nez Perce National Historic Site.

The significance of this trip Eliza Spalding and Narcissa Whitman made in 1836 comes from the fact that they demonstrated that Eastern white women could cross the country and establish homes in the West. They would be followed by hundreds of thousands migrating on the Oregon, California and Mormon Trails.