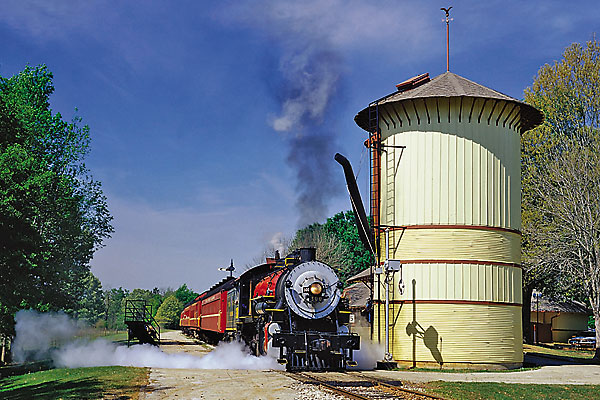 Our third annual awards honoring this year’s top museums based on their grand showcases of the American West in the previous year.

1- Great Platte River Road Archway
Kearney, Nebraska
We opted for a little brass, a lot of sass and a ton of vision with our history when we selected this year’s top museums based on their grand showcases of the American West last year. If you’re zipping along I-80, the Great Platte River Road Archway—True West’s Museum of the Year—might send you into a spin (it being the only historical educational monument granted air rights over a federal interstate highway). But when you pull yourself from underneath your airbag, check out this grand adventure in Kearney, Nebraska.
Like a fort straddling I-80, the Archway documents the nearly 500,000 men, women and children—trappers and traders, pioneers on the Oregon Trail, Pony Express riders, stagecoach jehus and passengers, railroaders—who headed west between 1843 and 1869.
Yet this privately owned museum doesn’t stop there. It covers the Lincoln Highway, and it celebrates sandhill cranes and classic cars, American Indians and drive-in theaters and diners—150 years of Westward migration, transportation and communication—relying on a knowledgeable staff (in period attire), computer graphics, life-size dioramas and a 1961 rag-top Cadillac.
Outstanding exhibits bring the Oregon, California, Mormon Trails, and a whole lot more, to life, drawing visitors ranging from former President Bill Clinton to actor Jack Nicholson (his movie About Schmidt was filmed at the Archway).
An architectural marvel, the $60 million, 79,000-square-foot museum opened in June 2000, and it refuses to slow down (unlike truckers on I-80). Future plans include a Pawnee earth-lodge reproduction and an American Indian interpretive center, the addition of the Nebraska Firefighters Museum and a celebration of the Lincoln Highway’s centennial in 2013.
Brass, sass, vision … and a 1,500-ton structure crossing 308 feet of interstate highway, anchored by 60-feet-long, 25-feet-high, two-feet-thick concrete abutment walls, this is one roadside attraction that’s definitely worth the stop.

The buffalo (okay, bison) has to be the animal most identified with the West, and that shaggy beast got its due when “The Bison: American Icon, Heart of Plains Indian Culture” opened in December at the museum dedicated to artist Charles M. Russell. Filling three galleries, the permanent exhibit—three years and $1.5 million in the making—unveils the bison’s role in American history.

The historic building in one of the West’s most famous (or infamous) towns continues to fuel interest in Western history with a wide blend
of interpretive exhibits as well as public presentations by top historians. Where else could you learn about mapmaking, Norwegian embroidery
and Seth Bullock, take in a classical guitar concert or attend a historic preservation symposium?

It’s a long way from Milwaukee, but the beer was flowing (figuratively) when “Capital Brew: Hops, Barrels & Bootleggers” opened at this great museum in historic Old Town, an intoxicating exhibit at a museum that specializes in fun, informative displays. Beer’s a pretty good subject to brew up interest and get younger folks inside a history museum.

Undoubtedly the most ambitious and hardest-working Western art museum in the country, this 80,000-square-foot gem (with a 40,000-square-foot addition under construction) explores the West through not only art (Maynard Dixon to Andy Warhol) but also symposiums, re-enactments, movies and a youth cowboy poetry contest. The special invitational exhibit “21st Century Regionalists: Art of the New West” showed the vibrancy of the contemporary Western art scene.

To commemorate the 140th anniversary of the battle George Custer’s 7th Cavalry brought to the Cheyenne Indians on the Washita River, the National Park Service gave visitors artwork, music, re-enactors and lectures, including a talk by Henrietta Mann, great-granddaughter of Washita survivor White Buffalo Woman. To reach out in a different venue, historian/actor Louis Kraft performed his one-man play, Ned Wynkoop: Long Road to Washita, at Cheyenne High School Auditorium.

Small town, amazing museum. That seems to be the consensus for this 17,000-square-foot learning center “dedicated to the enhancement and understanding of the history of the West, preservation of American Indian artifacts and culture, and exhibits of notable contemporary Western art.” Besides, where else can you buy Southwestern jewelry in the Pacific Northwest—on a free-admission day, no less?

We expect to hear a lot more about this two-story newcomer to the museum world that focuses on Billy the Kid, Pat Garrett and the Lincoln County War but doesn’t overlook the rest of the area’s rich history. Here you cannot only see the badge and gun A.J. Fountain gave Garrett but also a tiara worn at Queen Victoria’s wedding? Go figure!

Only 10 years old, the museum has already tripled in size, and its reputation continues to grow. Dedicated to educating children and adults about the history and heritage of the famous cattle trail, the museum offers a wide range of exhibits and special events.

Focusing on the story of overland migration allows visitors to experience the Oregon Trail indoors (a 25,000-square-foot facility that includes a massive, full-scale diorama will almost have you coughing from trail dust) and outdoors (four miles of hiking trails leading to a dozen Oregon Trail overlooks, and a one-mile stretch of wagon ruts).

The great cowboy artist was the focus at the Sid Richardson Museum in Fort Worth, Texas, when “Charles M. Russell and the Art of Counting Coup” showcased Russell’s oils-on-canvas, Counting Coup and When Blackfeet and Sioux Meet, and a sculpture, Counting Coup—along with a letter, written and illustrated by Russell, detailing the inspiration for the three works.

The Museum of the Fur Trade wasn’t tied down to Chadron, Nebraska. You could find the museum represented across the nation in all sorts of events, including the symposium “Smallpox on the Upper Missouri” held at Fort Union, North Dakota.

5. Crawl Into a Wolf Den

The Montana Historical Society museum in Helena kept the kids in mind with a replica of a wolf’s den as part of the long-term exhibit “Neither Empty Nor Unknown: Montana at the Time of Lewis and Clark;” there were no live wolves to bite the kids, nor scare the adults.

Few museums do it as well as Camp Floyd/Stagecoach Inn State Park in Fairfield, Utah, where time-traveling adventures range from the Johnston’s Army Adventure Camp for Boy Scouts and other history camps for kids to a Civil War Encampment that brought in more than 1,000 visitors last year.

If you had $1.25 Million—that’s what Hard Trails Wore Out More Than Ponies, Terpning’s 40-by-50 oil-on-canvas, sold for last year at the Masters of the American West Fine Art Exhibition and Sale at the Autry National Center in Los Angeles, California, one of the nation’s premier museum art events.

“Oregon is Indian Country” opened at the Tamástslikt Cultural Institute in Pendleton, using tribal stories and photographs (both historic and contemporary) for a moving look at the nine federally recognized tribes that call the state home.

11. Drink Some Merlot, Catch a Show

You probably wouldn’t associate wine tastings and dinner theater with mining, but the National Mining Hall of Fame Museum in Leadville, Colorado, is always creating inventive ways to bring in crowds—like an annual wine-tasting event in February, and a special performance of The Complete History of America (Abridged) last December.

The Arizona State Museum in Tucson held a party after receiving the 2008 National Preservation Award for Demonstrated Excellence and Outstanding Commitment to the Preservation and Care of Collections from the American Institute for Conservation of Historic and Artistic Works and Heritage Preservation. (What a mouthful!) That honor was worth celebrating, because for years the museum has been preserving its collection of Southwestern Indian pottery that numbers more than 20,000.

Last year, visitors put aside their copies of The Legend of Sleepy Hollow. The Washington Irving Trail Museum in Ripley, Oklahoma, near the writer’s 1832 campsite, sponsored Carla Chlouber’s book, published by Arcadia Publishing, about the first cowboy band to play over the radio.

More than 600 American Indian artists and thousands of tourists gathered in Phoenix, Arizona, to celebrate the golden anniversary of the Heard Museum’s Guild Indian Fair and Market, one of the world’s leading Indian art shows.

Or cold air. Or lukewarm air. With more than 100 restored water-pumping windmills, the American Wind Power Center and Museum in Lubbock, Texas, remained dedicated to saving these great saviors of the Great Plains. The windmills may still save these plains yet.

Celebrating its 41st anniversary, the Roy Rogers-Dale Evans Museum in Branson, Missouri, held its fifth annual “Round Up” fund-raiser, a veritable family reunion complete with a special museum tour by Roy Rogers Jr. and a Sons of the Pioneers chuckwagon dinner and show.

From Thomas the Tank Engine to the Polar Express to art shows and the Festival of Trees Disabled Charity fund-raiser, the Durango and Silverton Railroad Museum in Colorado continued to make railroad buffs happy before and after they took a ride on one of America’s most scenic narrow gauge train adventures.

Not to be outdone—and with tons and tons of historic rolling stock, it’s hard for the Texas State Railroad living history museum to be outdone—the Palestine-to-Rusk rails celebrated Watty Piper’s classic children’s book with The Little Engine That Could Rail Tour.

The Buffalo Bill Historical Center in Cody, Wyoming, held a presentation on the late author of The Shootist, They Came to Cordura and The Homesman. In 2008, Glendon Swarthout was inducted into the Western Writers of America Hall of Fame, and the BBHC houses this Hall of Fame exhibit outside the McCracken Research Library. Fitting that then-First Lady Laura Bush awarded the BBHC the 2008 National Medal for Museum and Library Service.

No better place for kids to horse around, or learn about horses, than at the American Quarter Horse Hall of Fame & Museum in Amarillo, Texas, which sponsored a number of events, including Horseology 101 and 102 camps, and the Two Bits for Your Brain Youth Art Show.

21. Call Somebody a S.O.B., Only Smile When You Say It
The Carbon County Museum in Rawlings, Wyoming, headed down to Saratoga as a sponsor of the first Wyoming Film Festival. On tap, naturally, was The Virginian, the 1914 silent version of Owen Wister’s Wyoming-set novel, directed by Cecil B. DeMille.

You couldn’t escape the 2008 presidential election, even at the Bob Bullock Texas State History Museum in Austin. “Cowboys and Presidents” showcased the Wild West of the Oval Office, from presidents like Teddy Roosevelt, Lyndon B. Johnson, Ronald Reagan and outgoing Texican-Pres. George W. Bush, to artifacts like Benjamin Harrison’s longhorn chair and Bill Clinton’s High Noon-inspired childhood drawings. Visitors cast their ballots for their favorites in interactive voting booths.

As part of its “Military in the West” exhibit, the Nelson Museum of the West in Cheyenne, Wyoming, continued to honor Army and Air Force generals who have made a difference in the 20th century. After all, Cheyenne is home to F.E. Warren Air Force Base.