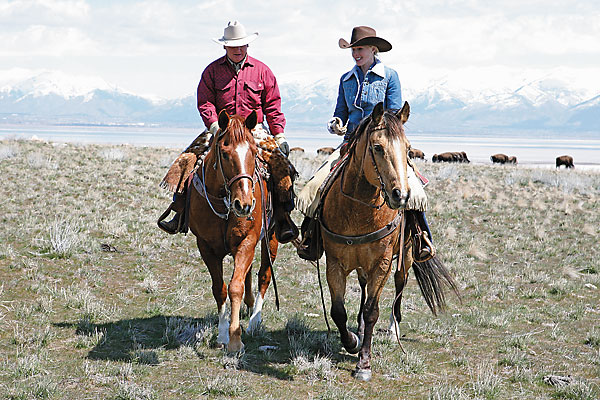 If you get up close, especially when one decides to charge you on horseback, bison can be pretty scary beasts.

They look prehistoric, with their gnarled, clumped fur hanging off in various places, like someone grabbed a random handful and pulled. As Ron Brown and I worked on moving a herd of about 40 of them, I realized how hard a bison roundup can be and how dangerous it is to work them on horseback. Once Ron gave his first shout of “Ha” and charged toward them, I knew that I was in for a new experience and a wild ride.

I was on Antelope Island—just outside of Salt Lake City, Utah—the largest island in the Great Salt Lake and since 1981, a state park where bison, antelope and coyotes roam free. With the snow-capped Wasatch Mountain range in the distance, this open space area is a beautiful place to ride. I traveled to Antelope Island to ride with Ron Brown, of R&G Horse and Wagon, whose horses are not only well trained, they are horses to the stars, having appeared in blockbusters Far and Away, Return to Lonesome Dove and Geronimo. Forrest, my Quarter Horse Thoroughbred cross, was well trained. He neck reined with only the slightest touch, and though he did get excited during the bison work (what horse wouldn’t), he listened to me very well.

Before our bison roundup, I meet Ron at the stables on the Fielding Garr Ranch property. You can still spot bison and deer by the springs near Garr’s sun-dried adobe ranch cabin that he built in 1848. The next year, at the behest of Brigham Young—the first governor of the territory of Utah and the second president of the Church of Jesus Christ of Latter-Day Saints—rancher Fielding Garr managed the church’s herds of horses, sheep and cattle. The livestock was used to entice settlers to move to the area.

“The members, they paid their tithing with livestock instead of money,” Ron says. “And so then they brought the animals here. The church used them to transport and bring members of our church from Europe and all over the world.”

I notice few trees on the island. I can only imagine how cold it would be in the winter without a wood fire for heating. Ron points to the ground below me at a large, dry buffalo chip, which folks gathered to use for cooking and for heating their homes.

Ron asks me if I want to gallop. Since the ground near the ranch is relatively flat, it’s a good place to ride faster. I feel so free as Forrest bounds along the ground. I hold him back at first, not wanting to make Ron’s horse think that we are racing, but Ron gives me the okay to loosen up and let him run at the pace he chooses, so I do. We race a little ahead of Ron—Forrest likes to lead—but then we keep a consistent pace with him and his horse. In the distance I see a large herd, and we head right for it. An annual roundup in November keeps the herd of bison healthy; Ron and I were about to hold a smaller version of this event.

The free-roaming bison on the island look ancient but are fast moving. A bison can turn and run at you, reaching speeds of 30 miles per hour. Ron warns me about some of the dangers involved in working bison, including getting gored and thrown up into the air, and tells me to watch them carefully. He also cautions that bison can turn 90 degrees at a run, something no horse can do.

Ron points out a particularly big bison that looks like he might charge me. It’s not just the defensive stance that the bison takes, but his piercing eyes that alert me to the danger. I steer Forrest away and around to another group, which scatters.

To get these bison moving in a cohesive direction, we pull a sneak attack, riding farther back toward the hills and around the bison, and then coming at them from behind. As the herd heads down toward the water and we gallop after them, Forrest is definitely charged up.

While the area around the ranch is flat, the high point of Antelope Island offers broad views of the area. After expending some energy with the bison, we climb to the top. We take in the snow-covered Rockies as the sun begins to set. Salt Lake City glimmers in the distance.

I can just see explorers Kit Carson and John C. Fremont hunting here in 1845. After shooting two antelope, Fremont wrote: “… in grateful supply of the meat they furnished, I gave their name to the island.” In 1893, a dozen bison made it to Antelope Island, after nearly capsizing on John Dooly and George Frary’s small sailboat. Today 600 of these rambunctious bison roam free; you won’t be able to miss them when you come here for your trail riding adventure.