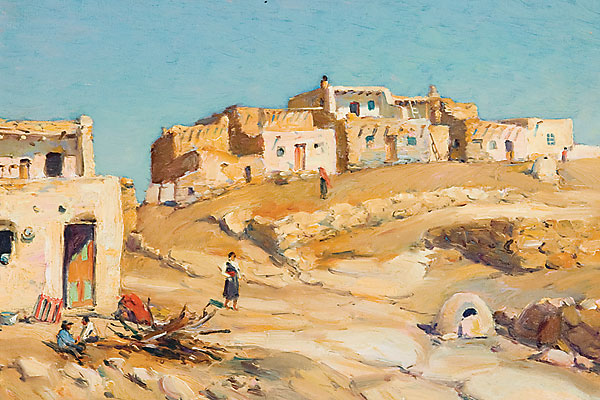 They spent weeks solving the mystery of an illustration that none of the Charles M. Russell experts had ever seen before; it was like Antiques Roadshow and History Detectives combined.

Foremost Russell authenticator Ginger Renner had already confirmed that the drawing was indeed a Russell. “We didn’t even have it in our library, and we thought we had everything on Russell in our library,” she says.

By we, Ginger is referring to her deceased husband Fred, who had been collecting Russells since the age of five and spent more than 80 years accumulating and researching the artist’s works. For the 22 years since Fred died in 1987, Ginger is the one who can spot the nuances that confirm whether a work of art is by Charlie or by a forger. Before Fred died, he had already passed on this responsibility to her, telling auction heads: “In fact, she has a better eye for Russell’s work.”

Ginger did not know the source of this illustration though; it was up to the others, working along with her on the Russell Catalogue Raisonné that was 11 years in the making, to trace its origin. These experts included B. Byron Price, director of the Charles M. Russell Center for the Study of Art of the American West, his able assistant Sharon Burchett and noted Russell author Brian Dippie.

The only identification they had to go on was the title in Russell’s hand: “We found an old long rider and two dangerous looking strangers.” That turned out to be enough. “The illustration, known as Before the Trial, was not reproduced in CMR’s lifetime, apparently. It was intended to illustrate a serialization in The Saturday Evening Post in 1913 (Jennings and Irwin’s Beating Back, an outlaw memoir), but was not used,” Dippie says.

Russell had illustrated the 1914 biography of Al Jennings, an Oklahoma attorney-turned-train robber who was captured in 1897, with his life sentence reduced to five years; he eventually earned a presidential pardon in 1907. Page 288 of his memoir was the clincher: “We found an old long-rider who had belonged to a different gang from mine, and two dangerous looking strangers.”

When the Russell illustration hammered at $100,000 at the C.M. Russell Art Auction in Great Falls, Montana, on March 21, Ginger could barely contain her excitement. She stood right up and told auctioneer Bruce Bock that the buyer had gotten an amazing deal on this rare Russell artwork. To date, the auction record for the artist is a $5 million bid for his 1918 oil painting Piegans, sold by Coeur d’Alene Art Auction in July 2005.

“Amazing deals” seemed to be the theme in Great Falls during Western Art Week, which included another historical art auction, March in Montana, held on March 20-21. An oil painting by Taos Society of Artists founder Joseph Henry Sharp went off the block at $110,000. The auction record for the artist is $1.28 million, for his 1903 oil Medicine Teepee, sold by Christie’s New York in May 2008.