Did David Crockett Die Near These Cannon? 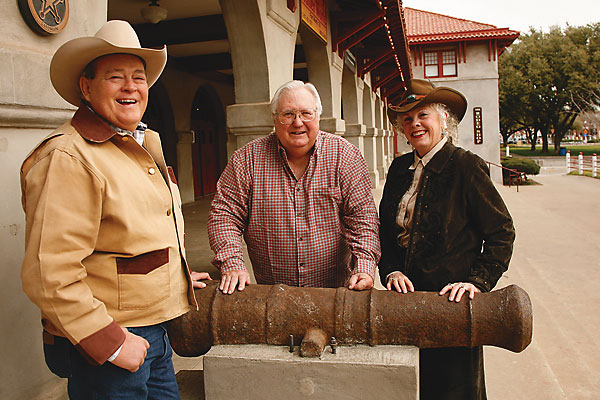 Historians say 23 cannon at the Battle of the Alamo were in battery in the northwest and southwest walls, as well as positioned in critical areas including before the main gate, in corrals and in the church. Yet what happened to them after the battle?

Cannon were that era’s Colt pistols.  The saying, “God made man, but Sam Colt made them equal,” stood true for cannon—only tenfold. Most cannon of that era, made in Spain from 1800 to about 1820, weighed from 650 to 850 pounds, and it took a carriage to move one, at least two mules to pull it on a carriage and at least five men to man one. They had helped force Santa Anna and his 2,100 Mexican troops into a 13-day siege, until the troops overwhelmed the Texians on March 6, 1836.

The 200-plus Texians defending the Alamo—including William Barret Travis, Jim Bowie and David Crockett—knew Santa Anna would enforce his threat of “no quarter” if they surrendered, and the force as a whole knew it couldn’t escape.

In 1939, more than a century after the Alamo battle, workers cleaning the San Antonio River, to build the now famous San Antonio River Walk, dredged up two iron cannon from muddy graves, about 100 yards from the Alamo site. The four-pound cannon had an oversized cannon ball jammed into its muzzle. The four- and six-pound cannon both had their cascabels and trunions broken off, and they were spiked.

How these two relics ended up at the Alamo Iron Works is a mystery, although the owner must have understood their historical significance.

Wes Clay, a San Antonio native, was attending the University of Texas at Austin and working part time cataloging the Texas History Museum’s collection in 1957-58 when he heard about the discovery of Alamo relics. Instinctively, he knew what they were: battle cannon. He wasted no time purchasing both.

“I paid $20 for both of them. I paid another $5 to get help and put them in the back of my convertible,” he says. He stored them until December 26, 2008, when both cannon were moved to a temporary home on the front steps of the coliseum at the Fort Worth Stockyards.

Several cannon were unearthed during the excavation of the Alamo; several cannon are in the hands of private parties; while a few others are on display at museums, says Richard Bruce Winders, curator of the Alamo, who holds a Ph.D. from Texas Christian University in American and Spanish Borderlands histories. “The fate and condition of the cannon tells the story most people are unfamiliar with,” he adds. “Many assumed the Alamo—the church and the surrounding buildings—were destroyed in the battle. They were damaged, but not destroyed.”

Santa Anna had left behind 1,000 of his troops to rebuild the Alamo as a garrison he would need once the Texians were defeated. Unfortunately for him, he saw defeat first, at the Battle of San Jacinto, after which he was a prisoner and forced to sign the Treaties of Velasco, obligating all Mexican troops to withdraw below the Rio Grande.

Alamo troops received different orders: Destroy the Alamo, so it could never be used again.

“This is when the outer walls were knocked down and combustibles were burned,” Winders says. “Since [Santa Anna’s] troops did not have the means to take the cannon, they spiked them.” In military terms, that means the Mexicans made the cannon inoperable by driving a metal spike into the cannon’s touchholes. They also forced oversized cannon balls into the muzzle. In addition, they broke off the cascabels and trunions, used to support the breech of the cannon and mount them.

“The soldiers apparently rolled the useless tubes into the irrigation ditches and maybe into the river,” Winders says. This scenario fits the two cannon Wes Clay purchased.

Did David Crockett die near one of these Alamo cannon? “Crockett’s body was seen by Susanna Dickenson as she left the church, presumably on her way to the gate.  If so, this would place his body in the Camp Santo area and within the vicinity where he was supposedly assigned (palisade by the church). There was one cannon here,” Alamo historian Alan C. Huffines says.

So what caliber of cannon was located at the Camp Santo area? Mark Lemon’s book, The Illustrated Alamo 1836, shows that four 4-pound cannon were at the Alamo. He places each one at: the south palisade, the lunette, the northeast courtyard (a.k.a. the Cavalry courtyard) and, yes, the Campo Santo in front of the church. No one can say for sure, but it is certainly within the realm of possibility that Crockett could have died near the four-pound cannon dredged up from the river that now rests in front of the Cowtown Coliseum.

Whether or not this is that four-pounder, these cannon are a tactile reminder of those who gave their lives for a free Texas. Next time you visit Fort Worth, “Remember the Alamo” by running your hand across these formidable cannon.