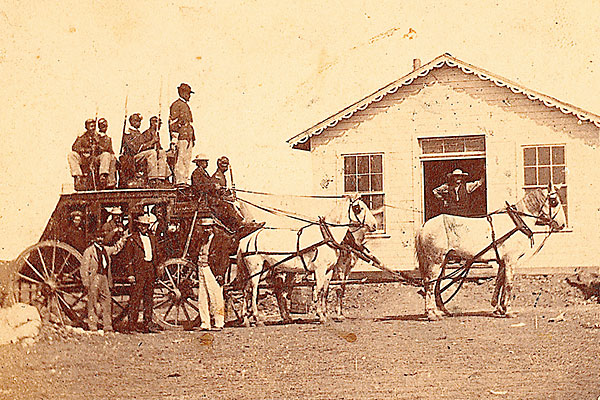 David A. Butterfield was the right man, with the right idea, for the right place.

A passenger and freight stage run from Atchison, Kansas, to Denver, Colorado, along the Smoky Hill Trail would certainly shorten the journey across the plains. Yet the Butterfield Overland Despatch Express (BOD) was doomed from the start.

Attacks from Cheyenne and Arapaho along the route made the journey so dangerous that one of the messengers, Fred Merwin, wrote out his will after two unsuccessful attempts to get the stage through and announced that he would get to Denver or die the next time. He was killed at Downer’s Station during that third trip.

Butterfield organized the BOD, a well-capitalized joint stock company, in the spring of 1865. Easterners invested $6 million. The first wagon train left for Denver on June 25, 1865, carrying 160,000 pounds of freight. Merchants responded with enthusiasm. Steamboats unloaded goods on the levees at Atchison for the amazing BOD to transport westward. Rail companies consigned carloads of freight. Orders rolled in. Construction companies built stations along the route. The military planned for extensive protection. The primary purpose of Fort Fletcher (later Fort Hays) was to safeguard freight and passengers along the route.

The trouble began when Butterfield started his passenger business in September. The initial run was grand. The line used bright red, heavy Concord stages pulled by four matched horses for show. The company switched to mules later, then spiffier horses again when the stage drew close to Denver. Butterfield himself went on the first coach and received a royal welcome in Colorado. He charged $100 per passenger for the eight-day trip.

But a mere week after Butterfield was wined and dined at the trail’s end, 30 warriors attacked the eastbound stage near Monument station. The Indians had burned other stations along the way and killed a driver. The terrified passengers managed to flee with the horses. They met a westbound coach, joined forces and returned to Atchison.

Artist and reporter Theodore Davis, a correspondent for Harper’s, was on board during the subsequent, infamous, mid-November attack on Downer’s Station led by the “half-breed son of Bill Bent, the old mountain man.” The passengers came across half-dead men who had escaped an attack on the preceding coach. The lone passenger, the messenger, the driver and the five persons manning the station had retreated to a cave when the Indians charged. But Bent lured them out with a false promise of peace. Fred Merrow lost his life immediately, and two captured stock tenders died after excruciating torture. Davis’s convoy sent a messenger back to Fort Fletcher pleading for help. Soldiers marched out escorted by the cavalry. A company of infantry followed. They continued westward only to find a trail of abandoned army wagons, burned stations, dead bodies and missing mules.

Butterfield’s grand enterprise failed. The line had acquired a certain reputation. Folks were reluctant to book passage. Beside the Indian attacks, operational expenses were enormous. In March 1866, he sold out to his major competitor, Ben Holladay. Holladay did not fare any better, and he sold out to Wells, Fargo and Company the same year.

Wells, Fargo operated the line for three months while fending off a plethora of attacks by Cheyenne. These owners, too, quickly realized the stage line was no prize and sold to the United States Express Company. By then, the railroad to Denver was pushing westward and the stage line was becoming less important.

The rails reached Denver in summer of 1870. Shortly after, the final stagecoach lurched along the doomed precarious route and closed the bloody history of the Butterfield Overland Despatch.