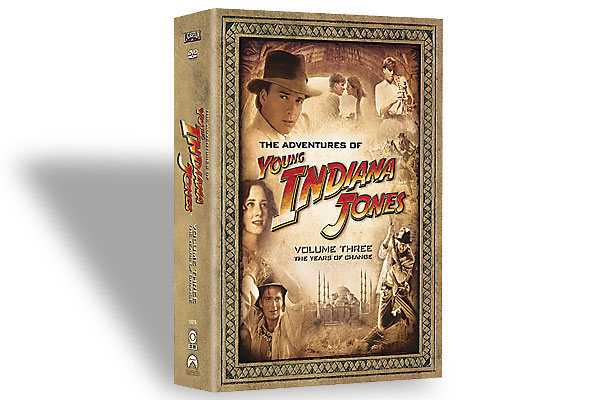 Indiana Jones may have been a professor and an archaeologist, but he always had the DNA of Western heroes. Guns, whips, horses, hats and the Yakima Canutt handbook of action movie stunts are what drew audiences to the four Jones pictures.

The same is true of the TV series Young Indiana Jones, which offered the teenage Indy a chance to make the acquaintance of most of the movers and shakers of the first half of the 20th century, and on this DVD collection, that includes director John Ford, actor Harry Carey and legendary lawman Wyatt Earp.  We see Indiana Jones learning how to cowboy with the greatest Western director, one of the greatest Western stars and the most famous survivor of the Gunfight at the O.K. Corral.

The episode on the disc, “Hollywood Follies,” begins at Universal Pictures, where Jones (Sean Patrick Flanery) has been hired to put a lid on the fiscal indulgences of Austrian director Erich Von Stroheim (Dana Gladstone) on the set of 1922’s Foolish Wives.  From there, Jones goes to work for Ford (Stephan Caffrey) on the set of Ford’s first full length film, 1917’s Straight Shooting.

“Good guys, bad guys—I wish it had been that simple,” muses Earp, as he tells us that most gunfights were won by rifles and ambushes, not face-to-face showdowns and .44 revolvers.  Early on, he refers casually to the O.K. Corral as “a fluke—[it] never should have happened.”   Anyone who loves Westerns or knows a bit about John Ford and the Silent Era can’t help but be entertained.

The entire 10-DVD set is pricey, but that can be cut nearly in half on the Internet.