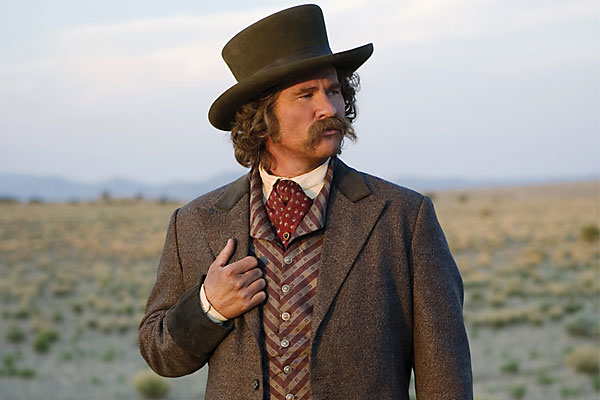 Ever since Val Kilmer first appeared as a parody of Elvis in the 1984 comedy Top Secret!, he’s had one of the most interesting careers in Hollywood history.

He was fantastic as Jim Morrison in The Doors,  Elvis (again) in True Romance and is directing himself as Mark Twain (see YouTube item).

And Kilmer, who lives in New Mexico, has appeared as two of the Western’s most important figures, Billy the Kid, in a rethinking of The Left Handed Gun, and as Doc Holliday in Tombstone.  Of the pair, it’s his role as Holliday that will probably stand out as the greatest performance of Kilmer’s life.  Kilmer drew on some of his family’s experiences when he developed the character for the 1993 film.

“My grandfather was a gold miner from the South and had made, roughly, in the same period of time, the same journey as Doc Holliday,”  says Kilmer.  “He’d come out west from the South.”

“But my grandfather had my father when he was 60, so he was out there in the 1880s as a young man, a teenager, living in the desert, and he had my father in the 1920s. So I was raised with a lot of Wild West stories that my father had experienced or had heard from his father.”

Like Richard III, Holliday is an actor’s dream part, especially for actors who like extra meat on their hambones.  There’s the cough and the tuberculosis, the anger and the icy cool, the eternal bond with Wyatt Earp and the Apache-dance passion with Big Nose Kate.  Like James Bond, Holliday is a high culture killer and an expert gambler, with a love for excess and a deadpan wit. And there’s the deep Southern charm, wrapped in a shroud of romantic doom.

“I went to a dinner and Kirk Douglas was there,” says Kilmer, “and he started poking me in the chest, laughing about the Doc Holliday thing, and he said, ‘I don’t know if it was true for you, but the hardest thing was [deciding] when to cough, cause you never know how much or how little.’”

Portrayals of Holliday actually predate the first official appearance of Wyatt Earp, probably because for the longest time Earp’s widow, Josephine, cracked legal whips whenever anyone came close to launching the character on screen. Holliday appears in Law for Tombstone (1937), a Buck Jones picture, two years before he reappeared as Doc Holliday (Cesar Romero), alongside Wyatt Earp’s first bow in the 1939 Randolph Scott picture Frontier Marshal.

But for all the many portrayals of Holliday, none had dared, or been allowed, to endow him with the thick antiquated Southern accent that Kilmer brought to the part, nor had he ever played a Chopin nocturne before.

“I think Kevin [Jarre, the scriptwriter of Tombstone] really understood him and things about him that maybe other writers have wanted to show but didn’t have Kevin’s talent. Like [Holliday] was a very funny guy, and, for example, his being an aristocrat.  It’s not a stretch that he would play a Chopin nocturne on a given evening, that he would play the piano well, little things like that.”

Kilmer draws a parallel between Holliday’s physical dissolution and the demise of the Southern ruling class during and after the Civil War.

“He fully embodied the physical history of the land that he was born out of, and that culture and society,” says Kilmer. “[And] it was destroyed. Georgia, Atlanta, Charleston were still there, but it was blown up. And Kevin Jarre’s original script, in a narration, said something like Doc was born of a highly aristocratic family, not just aristocratic, but highly aristocratic, an elite group of an elite group of people in the United States who could only be matched by Great Britain and France.

“All these men and women died, and Doc, by the end of the war, was 13 years. That made him a very poetic character because the same thing happened to his body. He went up to Philadelphia and became a successful society dentist, and then suffered the same fate as his own culture and society.”

Each important version of the Doc/Wyatt story has redefined and refined their relationship, portraying it as a kind of dance, with the moral center shifting back and forth from film to film. In John Sturges’s Hour of the Gun, Holliday tries to keep Earp from losing his moral bearing, whereas in the earlier Sturges film, Gunfight at the O.K. Corral, Burt Lancaster as Earp has difficulty tolerating Kirk Douglas’s moral questionability.

In Doc, Harris Yulin’s Earp is thoroughly corrupt, far more so than Holliday, while Kasdan’s Wyatt Earp has Holliday (Dennis Quaid) keeping something of a wry distance from his famous friend (Kevin Costner).  And in My Darling Clementine, Henry Fonda’s Wyatt Earp seems amused and fascinated by the eloquent and damaged Holliday, but their bond is a tenuous one.

“Doc Holliday and Earp were both noble men. Noblemen. And they had ideals and principles that they lived out and in a very honorable way,” says Kilmer. “My own family history and my own experiences in the West—I see the ranchers and farmers and crazy desert rats, and the real-life Sam Shepard characters; I see the nobleness of their spirit and the poetic nature that contact with the land creates, and more times than not turns men and women into poets or crazies.”

Kilmer sees the two men as having a poetic kinship that was built both of their innate differences and of the vicariousness that each could live out through the other.

“And so my feeling about the core of their friendship is that they were different men but they found a kinship that each of them was willing to die for.

“There were plenty of things that Doc Holliday did that didn’t serve the Earps’ best interests, and Wyatt Earp backed him up. And Doc backed him up because he was his friend. And there was a deep love; it really is a love story along those lines, and they were both willing to die for what they believed the other possessed, in terms of nature and character.

“And I think that Doc had a real respect for Wyatt’s morality even though he didn’t live it out, and Wyatt had a real respect for Doc’s sense of freedom and experience, that he had trouble committing to, so they each possessed a quality about life the other didn’t have and they could live vicariously through each other,” Kilmer says.

A few short years ago, not a soul inside the movie community didn’t believe that Kilmer was, if not the Brando of his generation, certainly among the top two or three contenders, along with Johnny Depp and Edward Norton.

It isn’t just acting that puts one up in that class, it’s a combination of style, humor, grace, some measure of irreverence and a sort of wicked glimmer that lets the audience see the puppet, the strings and the puppet master, all at once.  For these guys, when the cylinders click, it isn’t just a performance, it’s an event.

But at some point in Kilmer’s career, he took a steep curve that pulled him away from the kinds of major heroic leading men parts he had been getting. Nobody doubted his talent, but due to his eccentricity, or by choice, he turned away from action star scenarios and toward character parts that were more complex and less flashy, but no less entertaining.

Most recently he was seen in the cable miniseries Comanche Moon as Inish Scull, the commander of the Texas Rangers out of Austin, who gets captured and endures torture and hardship at the hands of the fiendish Ahumado.

In the modern Western Conspiracy, which went straight to DVD, Kilmer plays a returning veteran of the war in Iraq. He heads to Arizona to join a fellow vet who turns out to be dead, murdered by the minions of a fictitious Halliburton-like company named Halicorp. The executive, Rhodes, played by Gary Cole, is busy constructing a Western-theme town, built by immigrant labor, who are then shunned by the new community and attacked by the vigilante group United Borders. All of these events push Kilmer’s character, like Rambo, into violent retribution. Conspiracy is not art, but it presents interesting ideas and a few fun moments.

But the performance that will go down in history as Kilmer’s strangest is in a Polish-made Spaghetti Western called Dead Man’s Bounty, also available as a DVD. Describing this film would be an exercise in futility, but although Kilmer’s name is at the top of the credits and his face is prominent on the DVD case, he has no dialogue or scenes. Actually, Kilmer is dead for the entire length of the film, laid out in the street. He does manage a number of closeups and some point-of-view shots, but that’s about it.

Kilmer also plays a hardened criminal, a lifer,  in a new, and very brutal, picture called Felon, which, like Conspiracy, requires him to play very close to the vest.

Finally, there’s a rumor that Kilmer may act in another Western as Johnny Varnes, the man allegedly behind the assassination of Wild Bill Hickok. The movie is called The Hard Ride and some of the other characters found in the cast are Custer, John Hardin and Buffalo Bill—the picture will probably be partially shot on Kilmer’s property in New Mexico.