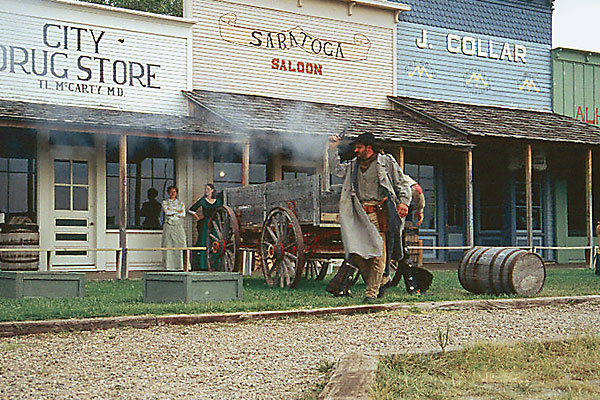 A barrel of whiskey kick-started this frontier burg.

The first business that opened on the site of Dodge City was George M. Hoover’s and John McDonald’s saloon built of sod and boards.

The partners opened their saloon on June 17, 1872, and sold “red eye” whiskey for 25 cents a ladle full, as a reaction against the prohibition of liquor at nearby Fort Dodge. Someone had to wet the throats of the soldiers, buffalo  hunters and traders in the area.

By August, the town was called Buffalo City, but the name had to change because the post office already had a Buffalo, Kansas, so the founders settled on the name Dodge City.

The Dodge City Times on July 7, 1877, spoke of Wyatt’s tenure there: “He had a quiet way of taking the most desperate characters into custody which invariably gave one the impression that the city was able to enforce her mandates and preserve her dignity. It wasn’t considered policy to draw a gun on Wyatt unless you got the drop and meant to burn powder without any preliminary talk.”

Today, you can belly up to the bar of the re-created Long Branch Saloon in the Boot Hill Museum and order yourself a sarsaparilla. Wherever you go in Dodge City, you’ll feel just as at home as the cowboys did in the 1870s and on.

Best Spot to View Wildlife: The Big Basin, located 35 miles south of Dodge City along Highway 283, features a large herd of Buffalo in a natural setting.

Do-not-miss Attraction: Front Street and Boot Hill Museum, a re-creation of what Dodge City would have looked like in the 1870s and an excellent collection of artifacts representing Dodge City from the 1860s through 1900.

Popular Local Event: Dodge City Days, held in July and August, a 10-day long celebration that includes a PRCA rodeo, concerts, an art show and a parade. About 75,000 people attend.

Who knows Dodge City’s history best? Fred Young, author of Dodge City: Up Through a Century in Story and Pictures, and Noel Ary, retired director of the Kansas Heritage Center.

Who’s the person in Dodge City everyone knows? Dr. R.C. Trotter, a local M.D. who has served as president of the Dodge City Roundup group. He has been visible in Kansas and on the National level in the rodeo circuit over the last five years and has been tireless in promoting our rodeo and Dodge City Days.

Best Time of Year: Spring and summer, when everything greens up and the wheat reaches its full growth ready for the harvest.

Average Temperature: Winter will average 30-40 degrees, while the summer will range from the 80s-100s.

Preservation Project: The Santa Fe Railroad Depot, built in 1898, once housed a Harvey House hotel and restaurant.  Now it houses the Depot Dinner Theater and an Amtrak waiting room. It took approximately 12 years to complete the restoration by 2002 and some $12 million funding.

Special thanks to Jim Sherer, city commissioner for Dodge City and retired director of the Boot Hill Museum and the Kansas Heritage Center, for sharing his love of the town with us.