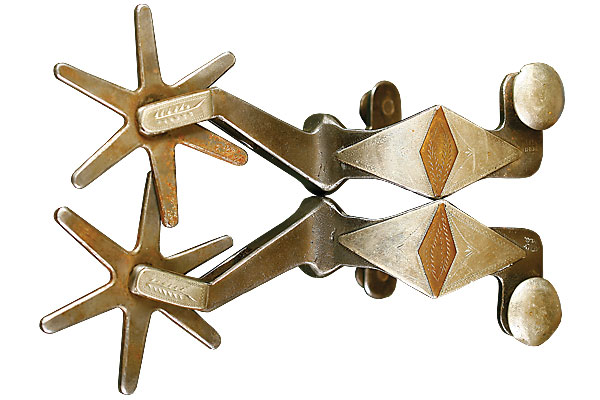 Pascal M. Kelly, born in 1886, turned out his first pair of spurs as early as 1903, in the Texas Panhandle town Childress.

In 2008, one of his pairs of silver-mounted, silver and copper overlay spurs with a rare Diamond Dick Pattern, marked Kelly Bros., sold for $28,000, the highest price paid for a collectible from 80-year-old Buster Welch’s bit and spur collection.

Welch is a four-time winner of the National Cutting Horse Association Open World Championship. So that other cowboys could enjoy his historic relics, he sold off 24 bits and spurs as part of the June 7, 2008, auction put on by A&S Auction Company in Waco, Texas.

Other notable Texas artisans whose spurs hit high marks at the auction include James Oscar Bass, Joseph Carl Petmecky and John Robert McChesney. You can recognize a Texas spur by its single-piece construction; it also rarely features a chap guard (that feature is more popular with California spurs as it kept the cowboy’s chaps out of the rowel).

But it was gear crafted by a protege of McChesney’s that would earn top dollar this year, almost a century after Pascal Kelly came to work for the master artisan.

In 1910, when Kelly met Texas spur maker McChesney of Gainesville, Kelly was already an accomplished forger of spurs. His history is shared in Bit and Spur Makers in the Vaquero Tradition by Ned and Jody Martin and Kurt House. In 1904, the 18 year old had driven his mother and younger siblings to a homestead claim south of Guymon, Oklahoma, that his father had filed. He constructed a half dugout house, scraped together old windmill parts to turn them into an operating well and set up his blacksmith shop. He turned out a pair of spurs a day, selling them for $4 a pair, and soon became the richest young man in Beaver County.

Nine months later, in 1911, Kelly and fellow employee Tom Johnson opened up their own business in Dalhart, Texas. Although the partners eventually parted ways that year, Johnson was married to Kelly’s sister; when Johnson died in 1915, Kelly completed his brother-in-law’s outstanding orders (leaving the spurs unmarked as Johnson would have done).

The year 1911 was also the first time Kelly marked his spurs “Kelly Bros.,” in anticipation that his younger brothers Grady and Leo would join him in the enterprise. His brothers did not actually take care of the business until financial struggles forced Kelly to accept a job with the Mexican Ministry of Agriculture during 1935-39. When he came back to Texas, he bought out his brothers and his maker’s mark went to simply “Kelly.” His return also meant great change for him, as market forces caused spurs to alter from the long shanks, narrow heelbands and large rowels of the ranching cowboys to the short shanks, wide heelbands and small rowels of the rodeo cowboys.

Kelly’s best year of production was 1959, which he described as producing the “greatest dollar volume in bits and spurs” since he started making them. He had just introduced a “Rodeo” line of bits and spurs that helped increase his value. But by 1965, Kelly retired. The famed spur maker was nearly blind. He sold his business to Jim Renalde of Denver, Colorado, and went to live with his son Jack in Oceanside, California. He died on March 10, 1976.