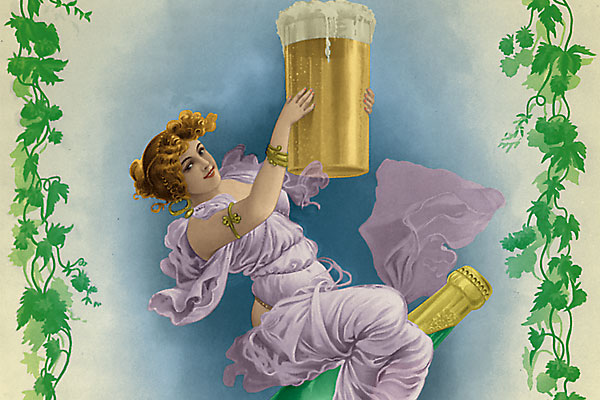 I’m sitting in some waterin’ hole with Sherry Monahan.

She’s the popular historian, author of Tombstone’s Treasure and The Wicked West, a woman with a passion for boozers, cruisers, gamblers and saloons. Lots of saloons. There’s only one reason she’d be in a dramshop with a guy like me: I’m dreaming.

After all, this isn’t the Long Branch. The bar’s a warped pine plank nailed to empty whiskey kegs, and the beer-jerker serving us is Buckskin Frank Leslie. Behind us, Wild Bill Hickok is exchanging words and lead with some 7th Cavalry boys. I order a root beer. Sherry requests an eggnog.

“Root beer and eggnog were among the most popular drinks served in 1881,” Sherry says. “Numbers 12 and 8, respectively. That gives me an idea.” Her drink has changed to a Whiskey Punch, the No. 5 drink in 1881. “Let’s name the top 10 saloons in the West, starting at No. 10 and working down to the West’s best!”

I toss down my ginger pop, No. 11 for those of you keeping score at home. “You go first.”

I nod. “You won’t find many bars in Montana that serve oysters on the half-shell or chicken saltimbocca.”

“It’s not the oldest saloon, but the Willow Creek’s in a 1910 building that started off as the Corner Saloon,” Sherry says. “The building has also housed a cafe, barber shop, pool hall and meat shop.”

Behind us, Morgan Earp just got shot in the back playing billiards. We order another round.

Sherry nods. “It’s in the Columbia City Hotel. The Ale House served countless miners and others who came to California during the Gold Rush. And that cherrywood back bar is a piece of art. It’s been at the What Cheer since the saloon opened in 1857. They shipped it around the Horn from Boston.”

“What are you doing in a place like this?” I ask Sherry.

“I shouldn’t be. Even though many saloons were more or less respectable, Victorian women did not go into them because no respectable woman dared enter a saloon—it just was not proper. Not to mention that men did not want them there; it was a place where they could seek solace among their brethren.” She slams her beer bottle across the head of the guy sitting next to us, dropping him like a fly, lifts his wallet and finishes his Hub Punch (No. 14).

“Wild Bill was playing poker in Nuttall & Mann’s No. 10 Saloon on August 2, 1876, when he cashed in,” Sherry says, “and today the current Old Style Saloon No. 10 is part museum, part saloon. Poker, blackjack and slots are played in the Utter Place.”

“No. 7,” Sherry says, “the Occidental Saloon in Buffalo, Wyoming.”

“It’s certainly one of the best preserved hotels and saloons in the West,” I say. “It was a rough place, though, in the late 1800s. Ask Frank Canton. He got his head cracked open with a pistol barrel there. But they changed its look around 1908, putting in a beautiful, 25-foot bar.”

“Saloon interiors ranged from simplistic to elegant,” Sherry says. “Few had nothing but swinging doors you see in the movies. Can you imagine the dust and dirt rolling in from the streets had there been swinging doors? Most had your typical 14-foot double doors, like all the other Victorian style businesses. The saloons that did have swinging doors were beyond the first set of bigger doors.”

“White Oaks boomed in the 1880s with a gold strike, bringing in men like Pat Garrett and Billy the Kid,” Sherry explains, “but when the railroad bypassed the town and the mines played out, White Oaks faded into a ghost town. Although you wouldn’t believe that when the saloon’s hopping. The building has been an office for a lawyer, then a surveyor’s office, before Bud Crenshaw opened it as a saloon.”

“The lawyer’s office might explain all those bullet holes,” I add.

Tom Mix, drinking a Sweet Potato Brandy (No. 10), walks over and hands us each a free sandwich. “What happened to Buckskin Frank Leslie?” I ask.

We eat our sandwiches. “As saloons multiplied and their prices rose,” Sherry explains, “many of them began offering luxury services to attract wealthy customers. A popular trend of the time was for a saloon to serve free lunches to its patrons. It not only attracted them, but also made them thirsty! Saloons offered pickled herring, roast beef, roast turkey, pickled eggs, sardines and olives—one even offered pâté de foie gras.”

“At the Menger Hotel,” I add, “spitting distance from the Alamo.”

“The Menger opened in 1859,” Sherry says, “and has served a who’s who of Western personalities, including Sam Houston. Cattle barons closed deals there. They even say that Teddy Roosevelt recruited Rough Riders in the Menger Bar. It’s the place to stay, and drink, in San Antone.”

I ask Tom Mix for a Vodka Martini, but he tells me vodka wasn’t consumed in the U.S. until after WW II. I get Old Forester on the rocks instead. Sherry opts for Jameson Neat.

“What brands were they drinking?” I ask after we toast our authentic 1880s whiskeys.

“Almost as excellent a choice as this Anchor champagne I’m having—$8.50 for five dozen pints.” She flings the empty flute into the fireplace.

“And that saloon rocks!” Sherry exclaims. “A great beer and liquor selection, and you have to check out that back bar. It came from the Pony Saloon in Tombstone.”

“Well,” I sigh, “it was just a matter of time before we got to Tombstone.”

“Of course. I love that town. No. 3, the Crystal Palace in Tombstone, Arizona.”

“Why not the Oriental?” inquires Buckskin Frank Leslie, a Stone Fence (No. 13) in his left hand.

“Who invited you into this conversation?” Sherry shouts. “Bartender! More ale!”

Leslie slinks away to draw a pint of six-month aged beer.

“The Crystal was started as the Golden Eagle Brewery—you could get pigs feet and Limburger cheese at its free lunch,” Sherry tells me. “After the building burned in 1882, Bernhardt Wehrfritz rebuilt it as the Crystal Palace Saloon. It had a goldfish pond and fountain in the center.”

Some new barkeep, who calls himself a “mixologist,” brings a Whiskey Cocktail (No. 1) for Sherry and a lemonade—with a stick, of course—(No. 15) for me.

“Don’t knock it,” she says. “A bartender would stock many mixers that would have included mineral waters, soda water, carbonic acid and cider. He also carried a variety of syrups: pineapple, strawberry, raspberry, lemon and orange. He would also have had a variety of wines, champagnes, sherries, ports, brandies and the glasses to match. Some of the most popular selections were: absinthe, vermouth, crème de chocolate, benedictine, Hennessy and Martell brandies, Kirschwasser, anisette, Mint Cordial and crème de cocoa. His list of other liquors included Holland and Old Tom gins, St. Croix or Jamaican rum, blackberry brandy, applejack and schnapps.”

“That’s why Sam the Bartender was my favorite character on Gunsmoke.”

“No. 2,” I announce, “the Buckhorn Exchange in Denver, Colorado.”

“Buffalo Bill used to hang out there,” Sherry says. “It opened in 1893 and has been going strong ever since. It has liquor license No. 1 in the state.”

“And I love to hear Bill Barwick sing there on Saturday nights.”

“No. 1, the Bucket of Blood in Virginia City, Nevada.”

“Bucket of blood was a name for a low-grade saloon, right?”

“Yes. Like ‘gin mill,’ ‘whiskey mill,’ ‘whoop-up,’ etc. The term ‘honky-tonk’ really didn’t come about until the 1890s. Virginia City had 72 saloons in the mid-1800s, but the Bucket of Blood today, which was rebuilt after the 1875 fire, is anything but rough and rowdy. I don’t think you found too many Tiffany chandeliers in real buckets of blood.”

John Selman has just come inside and is filling John Wesley Hardin with bullet holes.

“I’ve been in worst bars than this,” Sherry says.

“Yeah, but I’ve never been back to those bars.”

“Maybe you should wake up from this dream.”