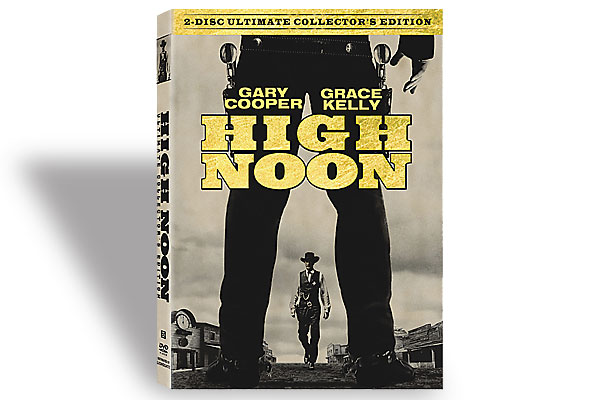 Many regard High Noon as one of the supremely significant moments in American film, especially as it relates to the players, and the politics, of its time. Audiences today may find that a little odd, since, to the untutored eye, the picture is a fairly unfussy story of a man alone, a marshal, Will Kane (Gary Cooper), who decides to do “what a man’s got to do”  and face down an outlaw and his three gang members who are determined to kill him.

Kane is retiring, getting married to a Quaker (Grace Kelly, in the part that put her on the map), and in no mood whatsoever to spend his wedding day sweating out an ambush by a cadre of cretins, but as there’s no one else in the small community of Hadleyville, New Mexico, either skilled or courageous enough to take his back, he goes out to meet the killers alone.

Cooper is rock solid as the frightened yet determined marshal, and the supporting cast is top-notch: Thomas Mitchell, Lon Chaney Jr., Lloyd Bridges and especially Katy Jurado as a fiercely independent local businesswoman who is embittered, partly due to her own long and somewhat unsettled relationship to Kane.

The writing is meticulous, as is the editing, and the movie’s clockwork structure is textbook perfect; it’s a lesson in tight design. All in all, High Noon deserves its reputation as a serious, substantial adult Western.

The broader historical view of the film is that the Joseph McCarthy anti-communist witch hunts were in full swing at the time, and the writer of the picture, Carl Foreman, was squarely in the crosshairs of the House Un-American Activities (HUAC). Kane represents a single man taking a stand against a gang of bullies and cutthroats while the community he represents cowers in the shadows—it’s not exactly a complicated or subtle allegory.

Yet that is not the reason High Noon still lugs around a yoke of controversy to this day. Writers and filmmakers have given it a lot of heat for being so darn serious and making Kane such a dour martyr. Famously, director Howard Hawks voiced his resentment at seeing a peace officer in inner turmoil who expressed his desperation to the uncaring townspeople.

Hawks has often been quoted as saying he thought Kane acted unprofessionally and he always claimed that his Western Rio Bravo, in which a besieged sheriff (John Wayne) refuses help rather than ask for it, was designed as a response to High Noon.

Wayne, in a slightly more loutish expression of his own contempt for the movie, often referred to a scene in High Noon that disgusted him, but the fact is,  Kane never did grind his marshal’s star into the ground, under his boot. Wayne was wrong, but his mangled recollection was pretty telling.

I think Hawks, and others, simply felt that the movie wasn’t much fun and that they hated watching a man with a badge squirming, even crying, as Kane does, even though he cries privately.

High Noon wears its agenda on its sleeve, and for some, that’s its virtue, while for others, it seems a violation of the conventions of the genre.

This new “Ultimate Collector’s Edition” follows another bells and whistles edition that was released in 2002. All of the featurettes, the remastering and digital fixes, the commentary and extras are present in both versions.  What the new edition has, besides an appearance by Tex Ritter (who sings the High Noon theme song) on the Jimmy Dean Show, and a brief visit to the Tex Ritter Museum in Carthage, Texas, is a 50-minute documentary “Inside High Noon,” which begins with a comment by former president Bill Clinton about how the movie has stayed with him for 50 years.  Clinton tells us that the reason he regards it as special is because it shows us that “courage is not the absence of fear; it is perseverance in the face of fear.”

Clinton, who continues to comment throughout the documentary, is surprisingly well informed about the movie’s history and its detractors, even addressing Hawks’s criticisms.  It’s a good documentary, but it’s questionable whether the feature makes replacing one collector’s edition with another worth the money or the effort.  On the other hand, any Western fan who doesn’t have High Noon on the shelf should go straight for the newer package.