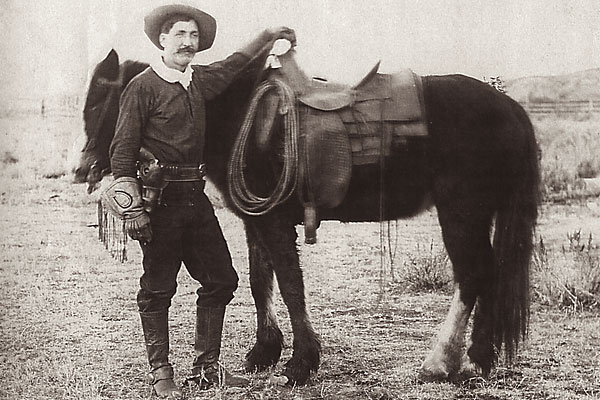 “Before leaving the train, I had prudently strapped to my waist a new (how distressingly new) Colt’s six-shooter, that looked and felt a yard long … the rig I had taken so much time in selecting and felt so proud of [was] quickly consigned to the scrap heap … [My] pistol had to be stripped of its flap holster and rehabited in the then new décolleté Olive [a Mexican Loop-style] scabbard.”

So wrote Edgar Bronson, upon his arrival in Cheyenne, Wyoming Territory, around 1876, when one’s ability in getting a six-gun into play could make the difference in a long life or eternal rest. The form-fitted “California Pattern” scabbard, an open-topped holster, had been in vogue for a few decades. But the arrival of the self-contained metallic cartridge inspired a new breed of gunleather, the so-called “Mexican Loop” holster, that would change the way most Westerners packed their shootin’ irons from that point forward.

Edgar and other shooters carrying metallic cartridges now had a ready supply of cartridges that they could carry on their person. Previously, during the muzzle-loading era, they had to carry a separate container, such as a flask, with the loose powder, percussion caps and lead balls.

The introduction of big-bore ammunition (cartridges .41 and up) and handguns inspired shooters to pack extra cartridges on their waist belts, in fitted leather loops—possibly creating the first true gunbelts. Since the small belt loops on the backs of slim-lined “California Pattern” scabbards were designed for the percussion age, gun-toting Westerners quickly discovered a new type of holster was needed so the loops could fit over the bulkier, and often wider, cartridge-laden belts.

Simply making a larger loop on the back of the California-style scabbards wasn’t enough of an improvement. The narrow loop on the holster’s back side allowed for too much “play,” and it also caused the holstered pistol to hang loosely at the side, flopping around uncomfortably when the wearer was active, such as when riding horseback.

The answer to the problem of fitting a six-gun’s holster snugly to one of these cartridge belts was solved sometime during the mid-1870s, in a simple, yet rather ingenious, way. Called the Mexican Loop holster, the design is suspected to have come from northern Mexico or the American Southwest. While maintaining the slender, contoured main seam and the recurved throat and trigger-guard area of the “California Pattern” holster, the new arrangement differed in that it consisted of a single piece of leather that formed the scabbard, backing and retaining loops on the holster body.

The Mexican Loop design incorporated the traditional holster portion that had been sewn shut vertically along the main seam, as with the “California Pattern.” Rather than cut off the top, back side of this pouch, the Mexican Loop design was pattern cut to form a skirted backing, then folded over and down vertically, behind itself. This formed both a belt loop and a skirt between the body of the wearer and the holster itself. The backing had two or more slots cut into it (depending on design and length) through which the scabbard portion was then passed, creating skirt straps or loops that held the body of the holster to the skirt backing. This design created both a wide upper loop through which the cartridge belt could pass, securing the holster firmly in place, while the skirt loops kept the pouch portion from riding up when the person drew his weapon.

While most loop holsters featured skirt loops that were cut into the backing, some—predominantly those manufactured in Texas and Montana—featured loops that were separately sewn or riveted. However they were crafted, the loops could be fashioned as straight or curved cuts, while some were shaped with scalloped edges. Regardless of style or embellishment, the loops remained an integral part of the holster’s functional design.

Initially, loop holsters were longer affairs, largely reflecting the 1870s-era cartridge Colts, Remingtons and Smith &?Wesson revolvers that were so often produced with 7 1/2 – to 8-inch barrels. Early scabbards were turned out with a tear drop-shaped toe plug, which helped maintain the holster’s shape in the lower portion of the sheath, while later specimens either left the toe open or continued the main seam closure throughout the toe area. Generally, the skirt backings of the first loop holsters tended to extend only halfway down the pouch, while those later-produced sheaths usually featured three-quarter- to full-length skirts.

Following the metamorphosis of the California holster, the Mexican Loop holster of the early 1880s went from a scabbard specifically fitted to a particular model gun to a gently tapered pouch with a semi-contoured main seam. The newer version was produced so a single holster could conform to a number of large-framed revolvers, rather than each sheath being cut for a given model. This gave most gun rigs of this breed a similar appearance. Nevertheless, a couple of Mexican Loop-style holsters still became identified with specific areas of the frontier.

By far, the best known was the so-called “Cheyenne” loop holster, created in the early years of the breed by regional saddlers such as F.A. Menea, E.L. Gallatin and possibly J.S. Collins. The Cheyenne holster is readily identified by its contoured main seam, fashioned with a slight bulge between the skirt loops—so created to hold the scabbard portion securely in place while the six-gun is being withdrawn. Interestingly, regardless of vintage, the Cheyenne-style holsters nearly always feature a sewn-in toe plug, occasionally called a “Cheyenne” plug. Cowhands of the Great Plains felt that besides helping keep the holster’s shape, the toe plug helped prevent snow from clogging the gun barrel—a problem not to be overlooked on the northern ranges. The Cheyenne holster remained popular from the time of its inception in the 1870s and well into the 20th century.

Down Texas way, a unique variation of the Mexican Loop holster appeared in the late 1890s, yet this style held a much more limited appeal to Westerners. Even so, well-known holster makers throughout the West produced a small number of the “Texas Jockstrap” holster. Saddlers H.A. Holtzer of Llano and S.D. Myers of Sweetwater  rank among the craftsmen of the area credited with originating this holster style. Its most prominent features were a gently-tapered, pouch-type scabbard, coupled with a large T-shaped loop or “collar,” that held its pouch securely at each side as well as at the bottom. This so-called “Jockstrap” appendage was actually a separate piece of leather, affixed to the skirt via rivets. In a few instances, a full pocket, in which the lower half of the holster pouch was firmly seated, was stitched to the skirt. The Texas Jockstrap loop holster enjoyed a modicum of popularity until sometime in the 1940s.

By the time of the introduction of the Mexican Loop holster, the trend in gunleather adornment had already shifted from the heavily carved floral motifs to simpler, border-stamped designs. These smaller, less flamboyant embellishments usually followed the outer edge of the scabbard portion of the holster, with additional stampings found on the edges of the skirt loops and sometimes around the outer border of the skirt. Periphery designs could vary from single or multiple lines, to that of a small repeating pattern, stamped to follow the general contours of the holster, loops and back skirt. Saddlers often incorporated different patterns into one design to create the finished border. Sometimes a stamped rosette or geometric motif might be added on the upper portion of the scabbard. The “maker’s” cartouche was frequently stamped in this spot, or on one of the loops. Some maker stamps were worked into the central portion of a floral embellishment, thus disguising it to some degree.

While border stamping accounted for the greatest number of loop holsters throughout the period of the Mexican Loop holster’s greatest prominence (1880-1920), by the 1880s, the more elaborate floral carved versions could again be found in fair numbers. In keeping with the looks of the times, though, the handiwork on these so-carved sheaths was generally contained within a pattern-stamped border, rather than the simple lined edge so prominent in the percussion age.

Holsters hailing from south of the Rio Grande were often decorated with embroidery rather than stamping or carving. This delicate work was accomplished via fibers from indigenous plants, as well as silken or metallic threads, and included designs such as the Mexican eagle and snake motif, geometric and Aztec patterns, and floral interpretations.

Sometime around the mid-to-late 1880s, basket stamping made its appearance on holsters. Within a few years, improvements in leather working equipment brought about inexpensive machine-stamped and rolled-on border designs, embossed floral work, fish scale, basket stamping and other full-coverage embellishments.

By the turn of the 20th century, as cowboys and other six-gun packers took to adding their own brand of trimming to their holsters, new ways of adorning gunleather was getting the attention of saddlers out East as well as out West. Alternatives to the stamped or carved scabbards included laced-on conchos as well as nickeled brass studs (called harness spots) that sometimes bordered the rigs, while, at other times, it virtually covered them. Main seams and borders that were sewn with contrasting rawhide thongs could also be found. Before the first couple of decades of the 20th century had passed, the loop holster could be had in more configurations and with a greater array of decoration than any other gun scabbard in history.

Despite the passing of the wild and woolly frontier, the coming of the motion pictures in the early 20th century gave renewed life to all things Western, while adding to the myth and lore of the cowboy and his tools. Like the 10-gallon hat, six-gun and silver-mounted spurs, the Mexican Loop holster—with all of its silver screen flamboyance—was assured a permanent place among the Westerner’s classic gear. You’ll see this holster on Roy Rogers in films like Don’t Fence Me In and Son of Paleface, Gene Autry in Back in the Saddle and Robin Hood of Texas, John Wayne and Joel McCrea in Red River and Colorado Territory respectively, and on just about every other movie cowboy hero.

The style readily lent itself to the newer “buscadero” gunbelts, in which the holster hung from a slot in the cartridge belt, rather than worn slipped over it. After all, where would this celluloid gunslinger pack his six-shooter, if not in his garishly carved and studded buscadero rig?

Although some loop holsters were produced for modern automatic pistols—especially the time-honored Model 1911 semi-auto Government Model and its variations—the western revolver is most associated with this gunleather form. From its early years of packing iron on the frontier through the action-packed Western films of Hollywood to the gun ranges of today’s cowboy action shooters and living history re-enactor, the Mexican Loop holster says “cowboy” in any language. Whether sporting a simple border-tooled design or gussied up beyond the 19th-century frontiersman’s wildest imagination, the Mexican Loop holster remains the classic Western holster.