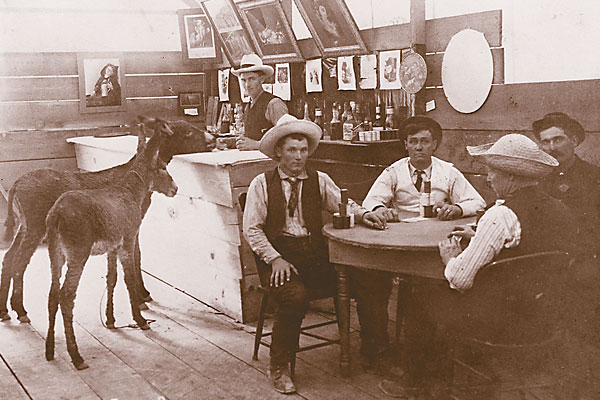 At 47, merchant Philip Drachman teamed his freight overland from Yuma, Arizona, by mule train before the Southern Pacific reached his home base in Tucson in 1880.

His partner Isaac Goldberg owned the “…first bar in Prescott,” reported the Courier on December 30, 1877. It opened in 1864 on a dirt street that would become Montezuma Street, which all Old West saloon lovers affectionately know as Whiskey Row.

The Palace was the name of Goldberg’s saloon. No one knows if this is the same Palace Saloon you can still visit today. The 1883 fire that destroyed most of Montezuma, including the Palace, also destroyed records that could have helped track down  ownership. But the twist in the story here is that it seems possible that Drachman and Goldberg might have been responsible for bringing the famous Brunswick back bar to the Palace Saloon that was rebuilt in 1883 by new owner Robert Brow.

Brunswick-Balke-Collender in Chicago added bar fixtures and furniture to its billiard table line in 1878 and sold its back bars up to 1912, the advent of prohibition, Brunswick spokesperson Daniel Kubera says.

From its manufacturing plant in Dubuque, Iowa, German craftsmen manufactured back bars measuring 16 to 30 feet in length that were fitted with beveled glass mirrors and a brass foot rail (you would never see a bar stool out West; real men drank their liquor standing up).

We’re not sure when the order for the Palace bar was placed, but the 24-foot-long, 12-foot-high bar went on quite a journey to get to Prescott. Freight shipped from the East rounded Cape Horn to San Francisco, California, then it was hauled to Lower California and dropped off near Puerta Isabel, Sonora. Paddle steamers transported the freight up the Colorado River to Yuma. Perhaps the order was placed while Philip was still running his mule train business. Yuma is where he would have loaded the cargo onto his mule team—popularly known back then as Arizona Schooners—and hauled the freight to Tucson and other points north.

He and Isaac had opened up their store in Tucson in 1870 and also supplied the citizens of Prescott with their merchandise. A newspaper advertisement reveals the wares they offered: “Dry Goods consisting of Hats and Caps of every description…. Cloaks, Shawls, Boots, Shoes…. A large stock of old Rye Whiskey and the best California Wine and Brandy…. A large stock of groceries, Butter, honey, Cheese, and Dried Fruits which we offer for sale; wholesale and retail.”

That rye whiskey and California wine and brandy were likely enjoyed by patrons at the Palace and other saloons on Whiskey Row.

When the Southern Pacific Railroad reached Tucson in 1880 though, Philip knew his freight days were over. He himself went into the saloon business, opening the Post Office Exchange on the corner of Congress and Church Streets in 1881.

So did Philip transport the bar before he retired? Perhaps his partner Isaac bought it for his “Palace” saloon and it had survived the fire to find a new home in the rebuilt Palace. Stranger things have happened.

Brunswick itself has no records of the Prescott order, falling victim first to the Great Chicago Fire of 1871 and then later to a 100-year flood in Virginia where, ironically, business records had been sent in hopes of avoiding another loss.

Now, if new owner Robert Brow placed the order for the back bar, it would have taken a slightly different route. The bar would have been sent to the railhead in Tucson and then transported in the high-sided wagons via mule train to Prescott. Either way, we have mules to thank for being able to enjoy our libations at this classic bar today.

We also have hardy Prescott citizens to thank. The Palace was not only a victim to a fire on Fourth of July in 1883 but it was also destroyed in a fire in 1900. Patrons carried the bar across the street to the Plaza, where they also placed the drinks they salvaged. They had a big old party on the plaza until the fire died out. That solid oak, cherry top bar had come too far, and the good folks in Prescott weren’t going to let a fire consume it!

Bob Brow also had help in Ben M. Belcher and Barney Smith, owners of the Cabinet Saloon that was also destroyed in the fire. The three teamed up to make the Palace Saloon the best in Prescott, and because of their efforts, it is Arizona’s oldest frontier saloon in existence today.

To All the Bars I’ve Loved Before

Brunswick back bars are rare to find, even though Brunswick made 95 percent of all bar furniture manufactured during that time. Back in 1891, the back bars were sold for less than $500, but today they are worth more than $50,000.

One place you’ll find a lot of Brunswick bars though is the Black Hills of South Dakota, particularly Deadwood. It just so happened that Deadwood was founded in 1876, two years before the company began manufacturing back bars, so the young town  that had 75 saloons in 1877 was a prime market for Brunswick.

You can identify the bar by the brass plate on the back, stating “Brunswick-Balke-Collender.”

Not all frontier saloons were as fancy as the Palace, so a Brunswick may not have been where you placed your boot when you bellied up to the bar. But the West without its saloons is unimaginable, and we hope you enjoy viewing these photographs of historic frontier saloons.