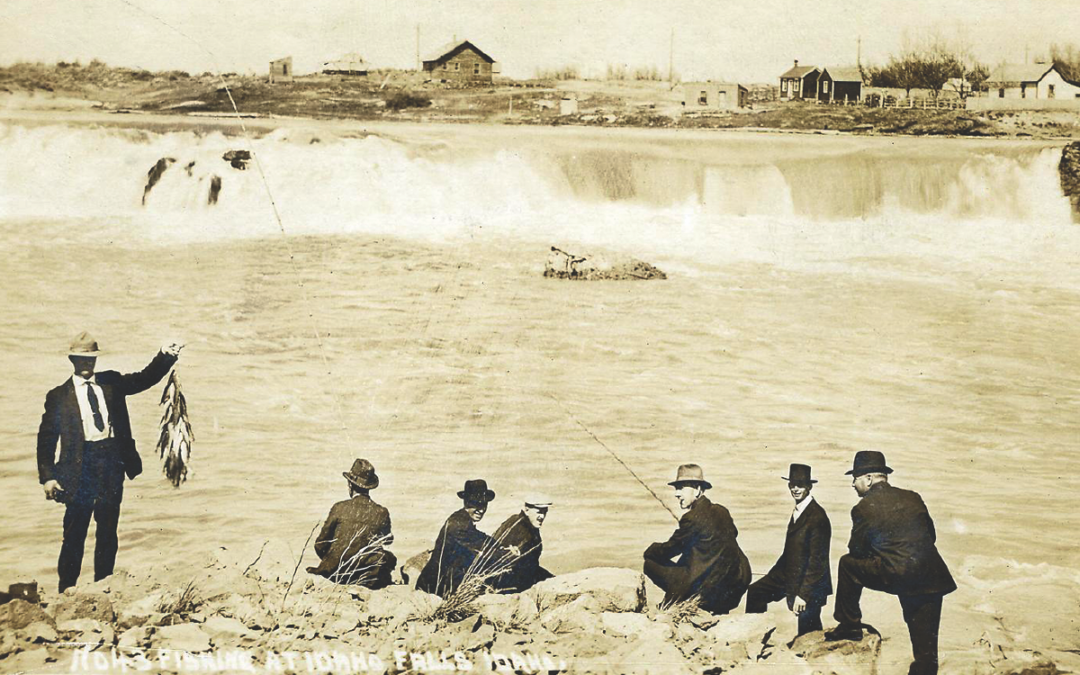 Idaho may be synonymous with potatoes, but trout has been a pioneer staple since it was first settled where cold rivers, streams and creeks were well-known for their abundance of various trout species. Fishermen were known to pull several trout from the cool waters to feed their families or supply local businesses.

Newspaper ads and editorials filled papers with trout information as early as the mid-1800s. Idaho attracted tourists and locals alike to fish and hunt, so a need for hotels and lodges rose. The Middle Boise Hotel opened in 1866, and The Idaho World reported, “first-class principles during the season, and all the delicacies of the country. Trout, grouse, squabs, fresh salmon, etc., are among the choice viands up their bill of fare.”

A restaurant called Dick’s “Big Three” in Hailey advertised in 1884, “Grand chicken dinner and fresh brook trout” and the editors noted, “The trout have begun to bite ravenously in the lakes. When a trout comes out of his winter quarters and is as lean as a rail and as hungry as a country newspaper man, he will bite anything.”

Vacationers like Grace Wakerman trekked to Idaho to fish. She was only 13 years old when she fished in Idaho in the fall of 1894. She and her parents left Denver and were accompanied by other travelers, as they made their way along clear, cool waters to fish. They camped on Little Black Foot River where she pulled a large salmon trout that weighed about two and a half pounds. She recalled, “I was a proud girl and thought I had done well for one of my age; the excitement can only be felt by experience.” They also camped at Medicine Lodge Creek about which she stated, “This is a sportsman paradise as the stream is literally alive with gamy mountain trout; the water is so clear that one can see the trout sporting up and down the stream, tempting the fisherman to take one from its mountain home. The weather is not as nice as we would wish for out door sport, but still papa keeps us supplied with game and fish; he caught 55 trout in four hours.”

Newtown Hibbs shared his appreciation of the natural bounties of Idaho with the Idaho County Free Press in Grangeville in 1895. He enjoyed mountain outings with friends where they camped as they hunted and fished. He reported, “The fishing in Fayette is good at some seasons of the year. On French creek the beautiful brook trout fairly swarmed. They came at the flies at every cast in platoons. They were so ravenous that they tore our flies, which were evidently made for us in dry weather, into shreds.”

Pioneers and visitors alike enjoyed the fish whether in their homes, tents, cabins or restaurants. Mr. and Mrs. T.F. Harris offered a massive bill of fare in 1898 at their restaurant in Rocky Bar that included include Mackinaw, lake and mountain trout.

Priest Lake was a popular spot for trout fishing, and by 1902, the Hotel Klockman was opened and operated by Williams and Downey in Coolin on the water’s edge. It soon became known as the Northern Hotel. The hotel, plus Camp Sherwood and the Bungalow Café were in full swing by the 1920s and operated by Mrs. Ida Handy. She offered cottages, cabins, rooms, camping and boats and advertised, “cutthroat trout fishing was never better” in 1929. It’s still open today so you can experience history. There’s also the Teton Valley Lodge in Driggs which has a historical connection going back 100 years.

Salt and pepper, to taste

Wipe the inside and outside of the fish to dry it and place it in an oven-safe dish. Cut a few ¼-inch deep slices across the skin to expose the meat. Sprinkle with the salt, pepper and paprika to your liking. Combine all the other ingredients in a bowl and pour over fish and baste occasionally. Bake at 350 degrees for about an hour or until fish flakes apart.