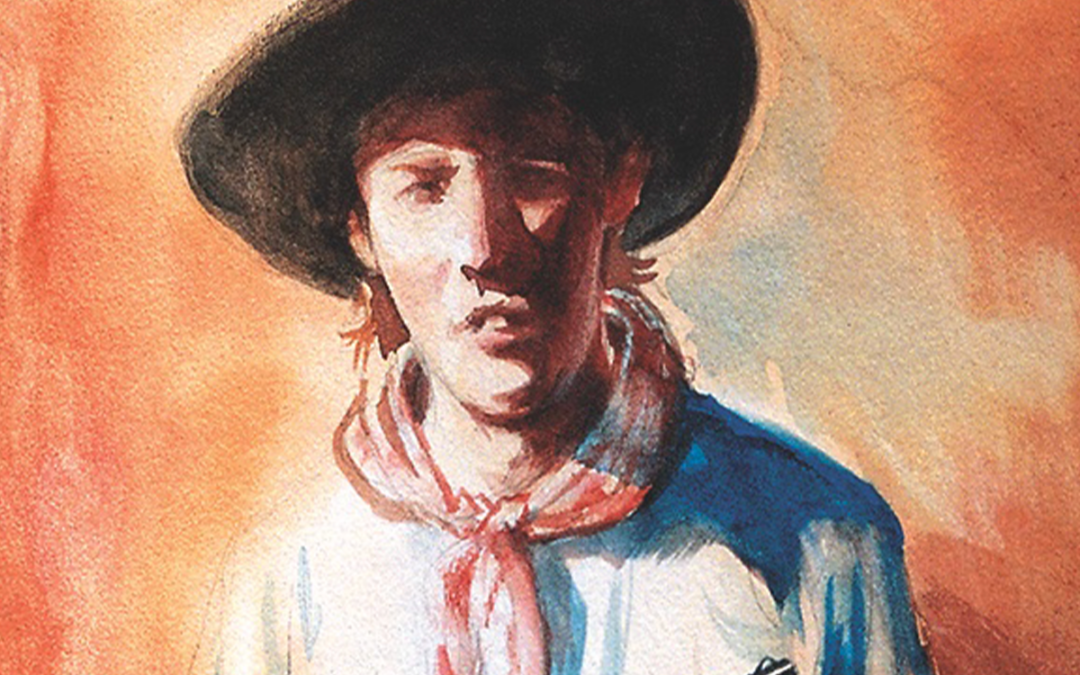 The famed Pulitzer Prize-winning writer shares his obsession for Billy the Kid in his tale of a gun he believes the outlaw owned.

This is the story of a gun, a handgun that appears to have belonged to Billy the Kid. I have been deeply interested in the life and times of Billy the Kid for many years, and I have written widely on that subject in poetry, fact and fiction.

I purchased the gun from my friend Will Channing of Santa Fe, New Mexico, with whom it had been placed for auction. Knowing of my interest in Billy the Kid, Channing informed me by telephone that the gun was available.

I was dubious. Immediately I asked, “Is it a .41 caliber Colt Thunderer?”

I became excited; I knew that particular model was the Kid’s weapon of choice. As I recall, I obtained the gun in or about 1983. It has been in my possession ever since.

With the gun, as an item of provenance, came a notarized statement as follows:

This original document bears the signatures of William H. Bonney II and Janice (Bolinger) Blevins, notary of the state of New Mexico, in their respective hands. It is dated August 7, 1982. Blevins, on the same document, swore and affirmed that she had witnessed the purchase by Bob Ward of the gun on June 9, 1976, at the Original Trading Post that Ward owned in Santa Fe. At that time she examined the identification card presented by William H. Bonney II and found it to be genuine.

I am not so naïve as to believe that “William H. Bonney II” is the real name of a real person. If it were, he would surely be visible, even conspicuously so, on account of his name. Here, one is bound to conclude, is an imposture, a ruse concocted perhaps to facilitate the sale of the gun. Be that as it may, the fact is that someone, a real person, signed that name to a bill of sale before a notary public in 1982. Who was that man?

From the time of Billy the Kid’s escape from the Lincoln County Courthouse on April 28, 1881, to the time of his death on July 14, 1881, almost nothing is known of him. Between Lincoln and Fort Sumner, in the last 78 days of his life, he became a legend and a virtual ghost. In this period the Momaday gun takes on a mantle of special importance. During this obscure interval, was this .41 Colt Thunderer in the hands of Billy the Kid?

“The .41 Colt double-action revolver of 1877 bears the serial number 26048. It has a barrel length of 2½ inches and is finished in nickel with rubber stocks. It was shipped to N. Curry & Brother of San Francisco, California, on May 11, 1881. Ten guns of the same type were sent in the shipment. It is significant that the gun was shipped to San Francisco instead of a distribution center in the East. Ordinarily, guns going to the West were sent to St. Louis, Missouri. Remarkably, Billy the Kid and the gun were both in New Mexico Territory at the same time.

“We do not know to whom the gun was sent or carried from San Francisco, but we know that it ended up in New Mexico. Traders enjoyed a considerable commerce in handguns in El Paso, Las Cruces, Roswell, Albuquerque, Santa Fe, Las Vegas, Fort Sumner and other settlements.”

Now we come again to the William H. Bonney II document and the name Guererro. Guererro is a common name of Spanish origin in New Mexico, and it is entirely possible that the Kid knew one or more persons of that name. We know that the Kid spoke Spanish fluently and that the Spanish-speaking people of his time and place held him fast in their affection, even protecting him from those who were hunting him down.

I have not yet been able to identify Teresa Guererro. Was she too a fiction, or was she perhaps a great-great grandparent of the man sin nombre, as Bonney II claims she was? I can easily imagine she was one of the numerous senoritas who shared a romantic bond with Billy the Kid. Did she or her family offer succor to him? Did he give her the gun to demonstrate his affection or gratitude toward her? It would have been a grand gesture—the young, dashing, famous outlaw gifting her with the valuable hardware, the very tool of his trade.

The Kid could well afford to be generous. He is known to have left Lincoln with several guns from the courthouse armory, though not this one. The Momaday gun, given the information provided by the Colt Manufacturing Company, must have been acquired closer to the time of his death. He surely jettisoned one or more guns in order to travel with less of a burden. 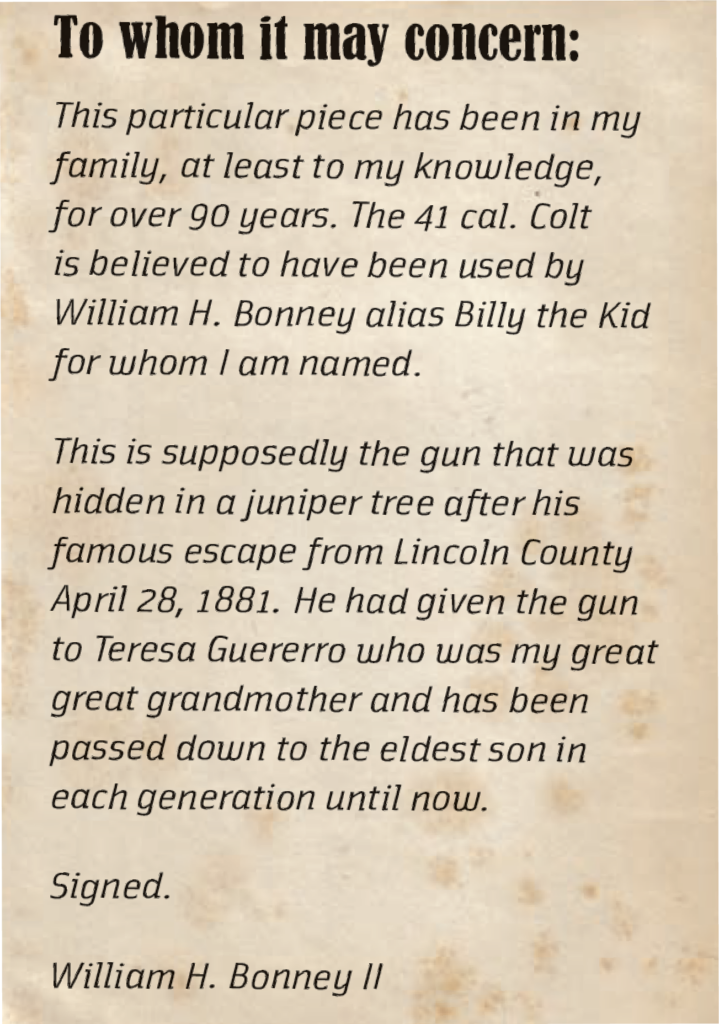 From the middle of May to the time of the Kid’s death is a critical window of opportunity. In those final days of his life, he might have bought, stolen or traded for the gun—this gun. Clifford R. Caldwell, in his book, Guns of the Lincoln County War, reports, “Legend has it that a man named Cherokee Davis, who worked as a cook for John Chisum, was given a new .41 Caliber Thunderer by Chisum on 4 July 1881. When Billy rode into Chisum’s cow camp along the Pecos he saw Davis’s Thunderer and took an immediate liking to it. Billy proposed a …trade with Davis.…”

This was only 10 days before the Kid’s death, but for the sake of possibility, Caldwell’s statement ought to be taken into account. Was the Momaday gun sent by N. Curry & Brother of San Francisco to John Chisum?

The Bonney II statement and the Colt Manufacturing Company  letter of authenticity provide convincing information. The fact that Billy and the gun were in the same place at the same time, together with the fact that the 1877 .41 caliber Colt Thunderer was Billy’s favorite weapon, notably support the argument that the Momaday gun belonged to Billy the Kid.  The preponderance of all available evidence is positive.

Bob Ward is deceased. William H. Bonney II and Janice Bolinger Blevins have vanished and are presumed dead. Teresa Guererro is lost somewhere in the mists of history. Yet each of these souls has affirmed, in one way or another, that the Momaday gun was once in the possession of Billy the Kid.

I am all but convinced. I find the evidence, in its totality, compelling.

Finally, let me set forth what, to me, is the most important and indisputable consideration of all. The Momaday gun is a real and  essential artifact of the Wild West, that dimension of history and lore that has so largely shaped the American imagination. When you look at the Momaday gun, when you hold it in your hand as Billy the Kid seems so likely to have done, you enter into a sphere of instinct that truly defines the American experience.  Here is a whole and true story in itself, and the story will forever involve Billy the Kid and his gun. The gun belongs to Billy, and Billy belongs to us.

In a dream Billy the Kid comes to me, and we confer:

–Take my word for it. Have I  ever lied to you?

–They say no one can prove that it’s yours.

–Well, sure as shootin’, no one can prove that it ain’t. 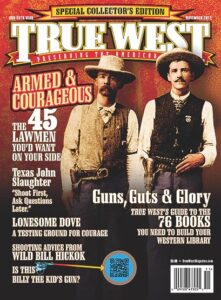 Editor’s Note: Pulitzer prize-winner and National Medal of Arts recipient N. Scott Momaday contributed this unique piece to True West magazine on his “Billy the Kid” pistol in October 2012. If you’d like to read more of Momaday’s articles, please go to TrueWestMagazine.com and subscribe for full access to more than 67 years’ worth of exciting issues of True West.