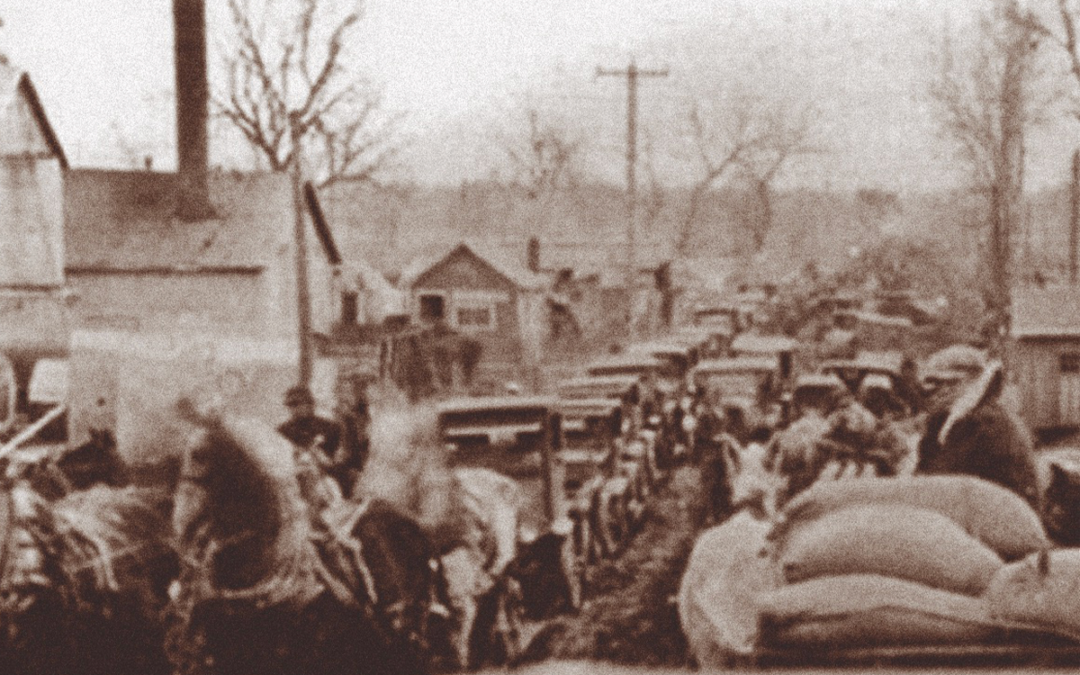 When the Law Goes Bad

There’s a fine line between catching an outlaw and becoming one.

Two Different Versions of the Fight

Based on the research of Glenn Shirley and Nancy B. Samuelson

Most of his friends think Bill Tilghman has earned the right to retire from enforcing the law after a 54-year career, but, at the age of 71, Tilghman, known to his friends as “Uncle Billy,” accepted the job as chief of police in the oil boomtown of Cromwell, Oklahoma. Up until Bill signed on, the town was out of control with no law in force with wall-to-wall brothels and illegal booze everywhere. On the night of November 1, Police Chief Tilghman is in “Pop” Murphy’s Cromwell Dance Hall with a friend and Deputy Hugh Sawyer. All three notice a vehicle that haphazardly pulls up to the curb in front of the dance hall. The driver stumbles out, clearly intoxicated, and discharges his pistol in the street. In the car are two women, who turn out to be known prostitutes and a companion, a U.S. Army sergeant named Thompson. Tilghman quickly gets up and goes outside. He and deputy Deputy Sawyer confront the drunk, and Tilghman grabs his pistol away. The drunk quickly produces another pistol hidden on his person and shoots Tilghman in the stomach and chest at close range. Tilghman slumps over and falls into the street. In the confusion, Wiley Lynn flees the scene and turns himself in at the Federal District Headquarters in Holdenville, Oklahoma, pleading self-defense.

Wiley Lynn had a spotless record before the shooting of Cromwell, Oklahoma, Police Chief Bill Tilghman. In fact, the prohibition agent was on his way—with a search warrant—to close down “Pop” Murphy’s Cromwell Dance Hall when Bill Tilghman attempted to block his entrance because Tilghman was on the take to keep the illegal dance hall open. In Lynn’s version, he parked the car across the street from the dance hall and when he got out, he inspected his gun and it misfired. Tilghman then came out of the dance hall with his gun drawn and immediately accosted Lynn, who claimed, at his subsequent trial, that he identified himself as an officer of the law. Tilghman backed Lynn against a wall with his hand at his throat, but Lynn got his little finger between the trigger guard and prevented him from shooting. The deputy took Lynn’s pistol, but he managed to push Tilghman’s gun barrel down and retrieved another pistol “he had on his left side and shot Tilghman three times.” Lynn then walked over to Deputy Sawyer and demanded his gun back, which Sawyer complied with, and he got back in his car and drove to Holdenville, the county seat and turned himself in.

Author and researcher, Nancy B. Samuelson turned the Bill Tilghman story upside down with the publication of her 1998 book, Shoot from the Lip: The Lives, Legends and Lies of the Three Guardsmen of Oklahoma and U.S. Marshal Nix.

Cache, Oklahoma, was all abuzz in August of 1908 as the Oklahoma Mutoscope Company began filming a mock robbery at the local bank. The film company allegedly was organized with capital stock of $50,000 and W.E. Curtis of Kansas City had “the most perfect picture machine in the world.” But, as is the case even today, money and a good camera doesn’t make a good movie. However, numerous legendary lawmen and outlaws show up in the picture: Chief Quanah Parker, Al Jennings, Bill Tilghman, Heck Thomas, Chris Madsen and possibly Frank Canton can be seen in the movie.

Incredibly, the killer, Wiley Lynn, turned out to be a prohibition agent and he was acquitted after a trial with two key witnesses failing to appear. Deputy Hugh Sawyer made matters worse when he testified; he could not see clearly what happened.

A month after the murder, the town of Cromwell was burned to the ground with every single brothel and saloon torched. Many have speculated that friends of Tilghman burned down the town in retaliation for the murder of their friend.

Agent Wiley Lynn continued to work as a prohibition agent, although he eventually lost his job. He was arrested several times in Wewoka and Shawnee, Oklahoma, for drinking and other minor offenses. In 1932, he was living in Madill, Oklahoma, when, on the night of July 17, he came into a drugstore intoxicated and pulled a pistol. Agent Crockett Long of the Oklahoma State Bureau of Investigation happened to be in the store. He confronted Lynn and stated, “Put that gun down, Lynn.” When Wiley refused, Long calmly pulled his own pistol and they both fired simultaneously. Several bystanders were hit and both men continued firing until their guns were empty. Both men were hit five times each at close range. Both men died at a local hospital.

Recommended: Shoot from the Lip: The
Lives, Legends and Lies of the Three Guardsmen of Oklahoma and U.S. Marshal Nix by Nancy B. Samuelson (Shooting Star Press, 1998)  and Guardian of the Law, The Life and Times of William Matthew Tilghman 1854-1924 by Glenn Shirley (Eakin Press, 1988).