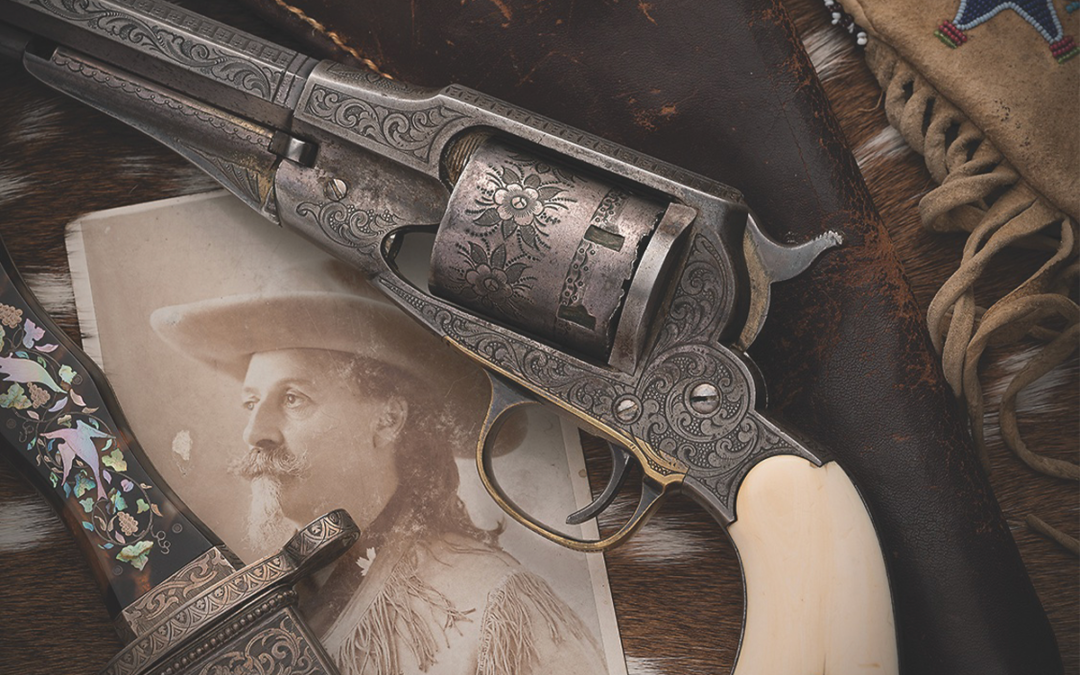 The Rock Island “Premier Firearms” auction held August 26-28 included notable weapons from legendary characters of the Old West…and beyond. Among those characters were two staunch friends of William F. “Buffalo Bill” Cody. One was Wild Bill Hickok, who a teenaged Cody met on a wagon train along the Oregon Trail. Their lives intertwined from that moment until Hickok’s death in 1876.The other was Frank North, a fellow scout with Cody during the Indian Wars. North later purchased a Nebraska ranch with Cody and helped him begin his Wild West show. Weapons from Hickock and North were represented in the auction.

James Butler “Wild Bill” Hickok’s Smith and Wesson Model 2 Army revolver was presented at the auction with extensive provenance. That included information suggesting it was on him when he was killed in 1876, just two years after he performed onstage with Cody in Buffalo Bill’s Combination. The revolver brought $235,000. Frank North’s reputation was overshadowed by that of his friend Buffalo Bill, yet he too was an important scout during the Indian Wars. His Remington “Improved New Model Navy” revolver was manufactured between 1870 and 1875. It was inscribed and presented to him by Cody, probably while North was with Buffalo Bill’s Wild West. Like the Hickock revolver, this firearm also had very strong provenance and sold for $49,938.

Buffalo Bill, Wild Bill Hickok and Frank North were all part of the “True West” but helped create the myth of the West. It was a myth that influenced Western movies and TV shows, even science fiction. The swashbuckling heroes of the Star Wars movies wore pistols on their hips and brandished sabers. A Mauser C96, converted by the studio armorers to become a “DL-44 Heavy Blaster Pistol,” was used by Harrison Ford as Han Solo in the first Star Wars movie. It sold for $1,057,500 at the Rock Island Auction.

There were, of course, other handguns, rifles and accessories, including rare Winchesters and even a Colt Gatling Gun. Altogether the 2022 “Premier Firearms” auction, with 3,706 lots, brought in $23,025,594. With the high prices realized by firearms associated with legends of the past and the future, the auction demonstrated that the myth of the West, even a West set “a long time ago in a galaxy far, far away,” continues to fascinate collectors.