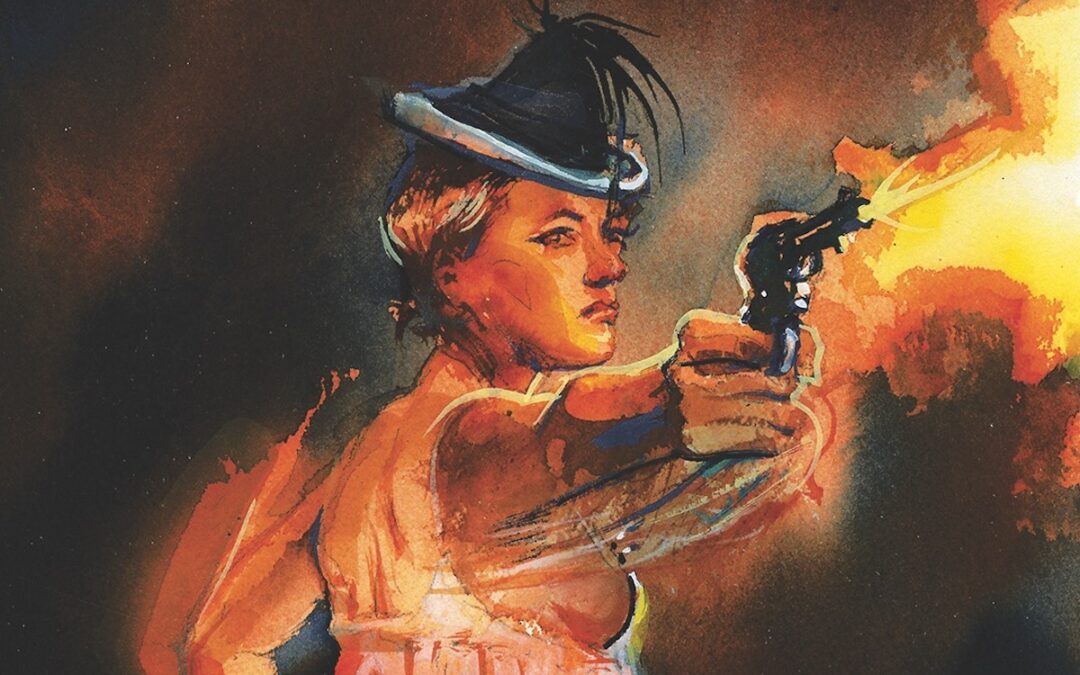 The Real Women of the Wild West

All Artwork by Bob Boze Bell

The Queen of the Colorado Red Light District 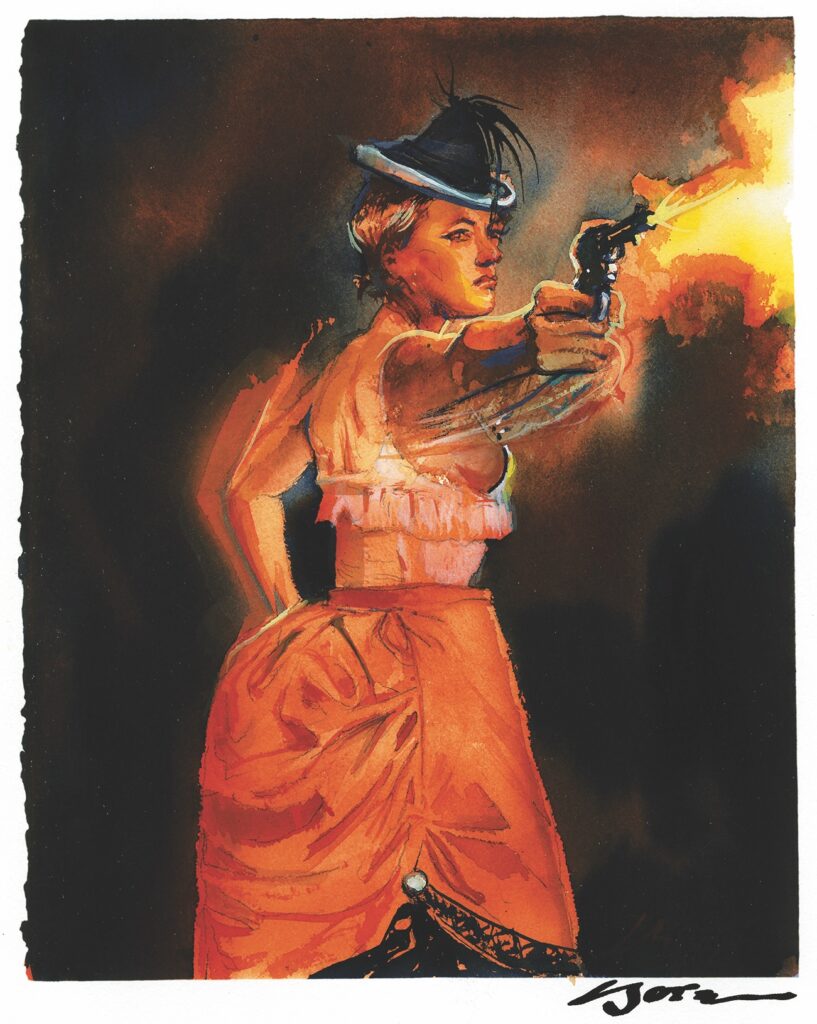 Jennie Rogers was a tall drink of water, as they used to say, standing at six feet tall.

She had gone through several names and marriages before she landed in Denver wearing her trademark pair of emerald earrings. She purchased her first “house” from Mattie Silks in 1880. At 1942 Market Street, she opened “The House of Mirrors,” which was known as the most opulent and infamous brothel in Denver. She became notorious and even better known when she caught her husband in the arms of another woman, several months after their wedding in 1887. “I shot him because I love him, damn him!” she is quoted as telling the police. Her wounded husband persuaded the authorities to let her go.

“I shot him because I love him, damn him!” —Jennie Rogers

Death On The Line 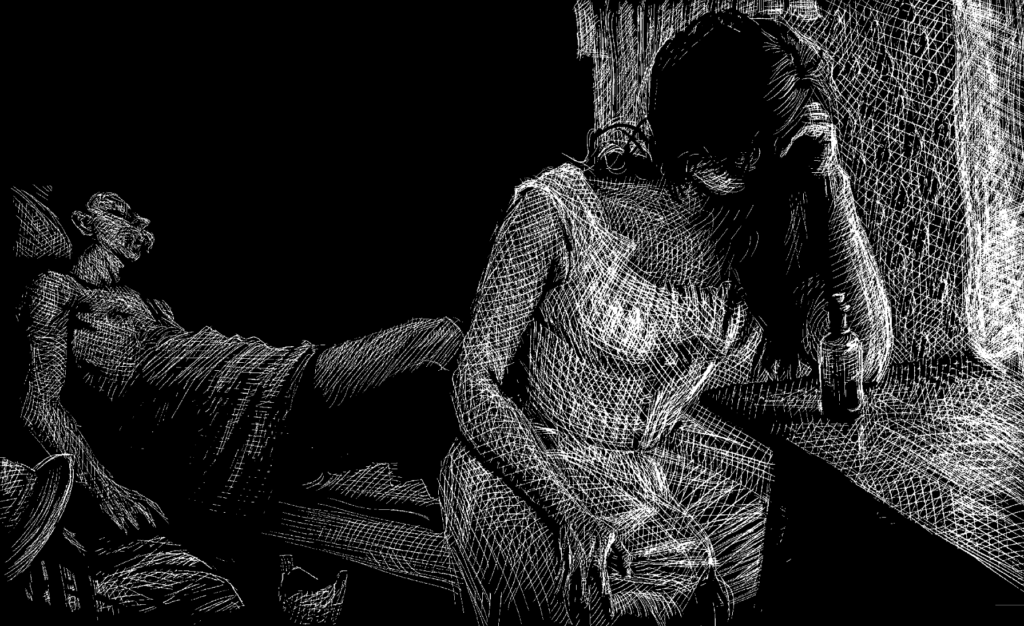 Wyatt Earp arrived in Tombstone with his second wife, Mattie, who he later abandoned for the live-in girlfriend of Johnny Behan. Mattie returned to her former profession as a soiled dove and ended up in Pinal, Arizona, where she took an overdose of laudanum on July 3, 1888, per her grave marker. Before she died she confessed, “Wyatt Earp ruined my life!” 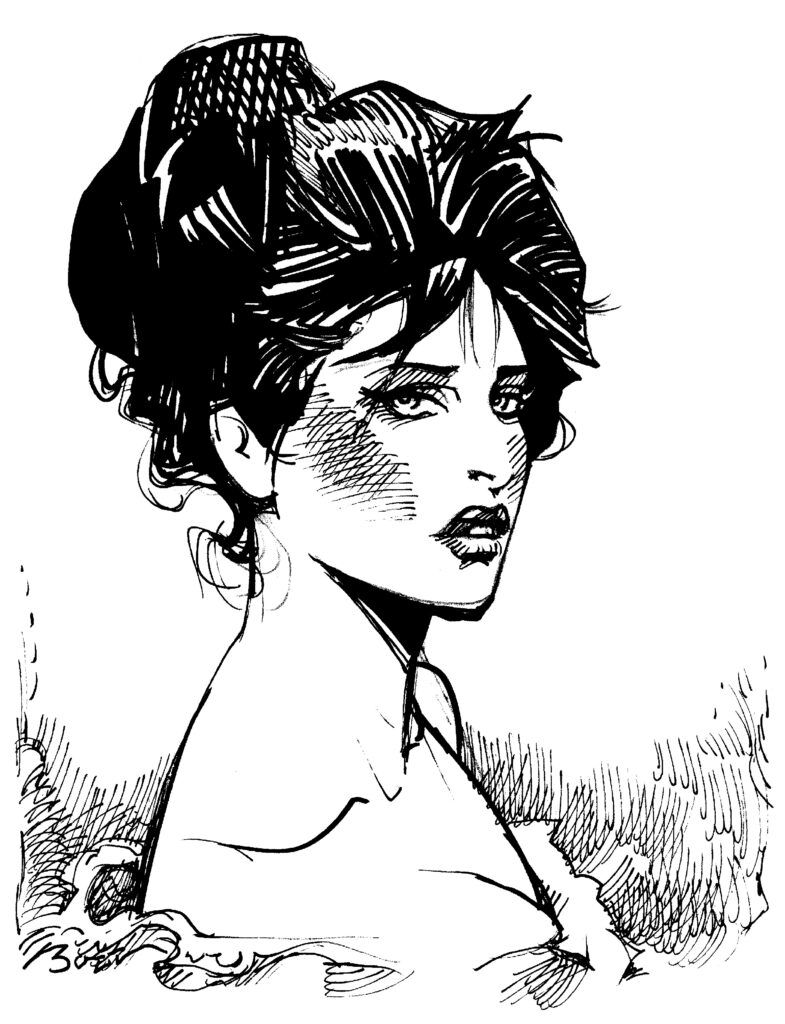 A teenage runaway, Sadie (real name Josephine) Marcus landed in Tombstone and “shacked up” with Cochise County Sheriff Johnny Behan. By 1881, that relationship was over, and she later consummated an affair with Behan’s archrival, Wyatt Earp. She lived with Earp for 47 years as a common-law wife and outlived him by nearly 16 years. Much like Libbie Custer did for her famous husband, George Armstrong, Marcus fiercely protected Earp’s reputation; she also tried to cover up her own infamous past in Tombstone. Historians still debate whether or not she had worked as a “soiled dove.”

Did Big Nose Kate Have a Big Nose? 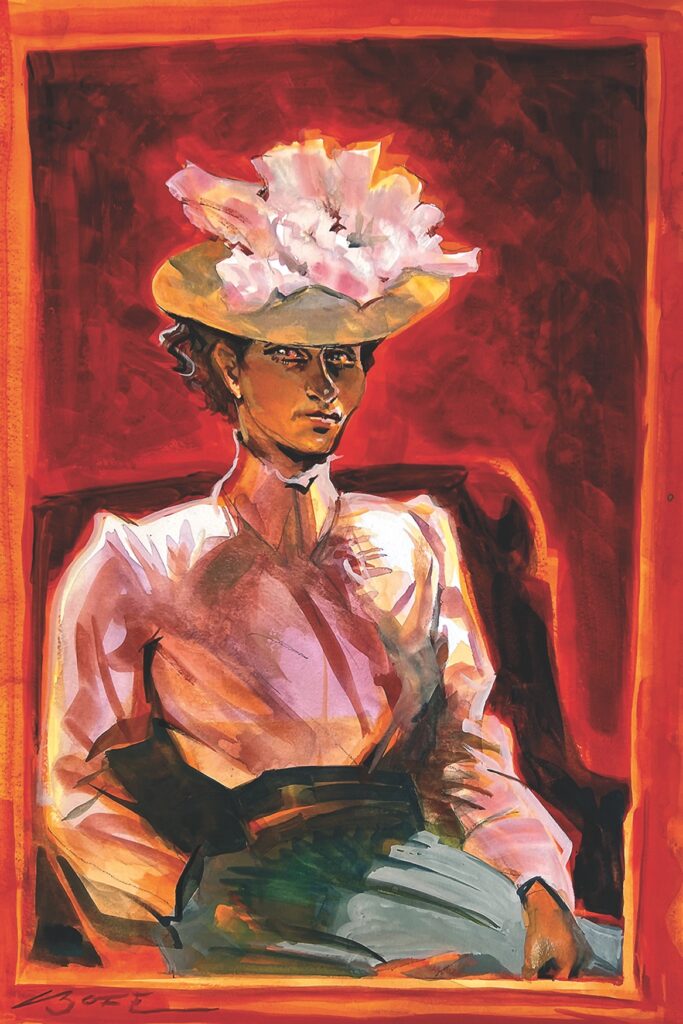 One of the enduring mysteries of Old West history is where did Doc Holliday’s girlfriend, Kate Elder (real name Mary Katherine Haroney) get her nickname? Some say she got it because she couldn’t keep her nose out of other people’s business (she was nosey). The earliest mention of the nickname is found in Wyatt Earp’s article in the San Francisco Examiner, August 2, 1896, “How Wyatt Earp Routed a Gang of  Arizona Outlaws.” In the article it’s plain that Wyatt had no use for Kate and the feeling was mutual.

But here’s the rub: no contemporary document or newspaper item has been found that described her as Big Nose Kate. Many historians have made the case that in the photographs of her in old age, she doesn’t appear to have a big proboscis (see above). But if you look closely, that is not a button nose. At this late date, the verdict is still out, but if push comes to shove, we think you could make a good case that she, indeed, had a big honker. 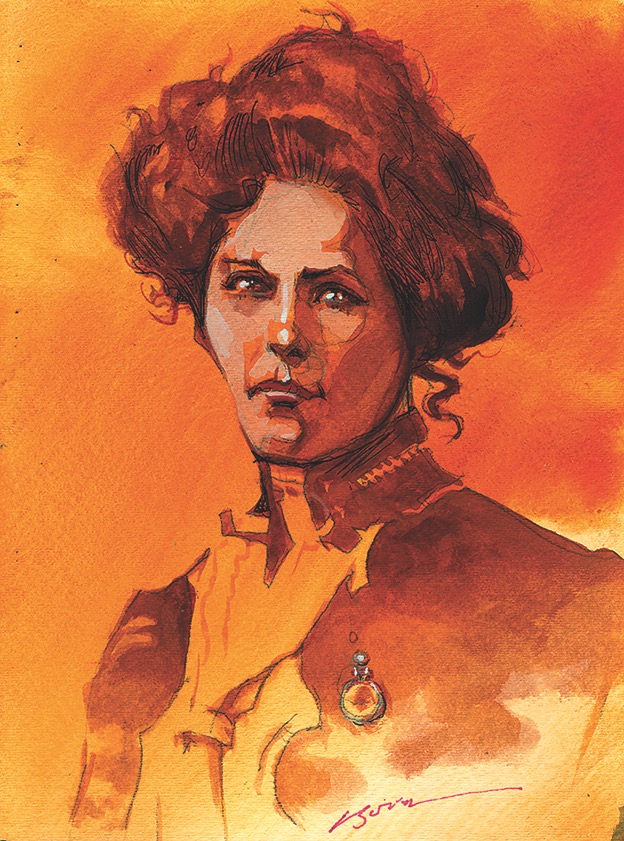 Etta Place, the beautiful girlfriend of the Sundance Kid, followed the Kid and Butch Cassidy to South America. She appeared in the famous Tea Party photo taken at Cholila, Argentina, but she disappeared sometime before the boys met their doom in Bolivia. Some accounts state that she was a schoolteacher, but most historians now believe she actually was working in Fannie Porter’s brothel in San Antonio when Harry Longabaugh met her in about 1899. Even her exotic name, Etta, is now thought to have been a typo on a Pinkerton rap sheet and perhaps a corruption of Ethyl. Either way, she is now a legendary Old West character.

When Sharlot Hall Pulled A Gun On Grover Cleveland 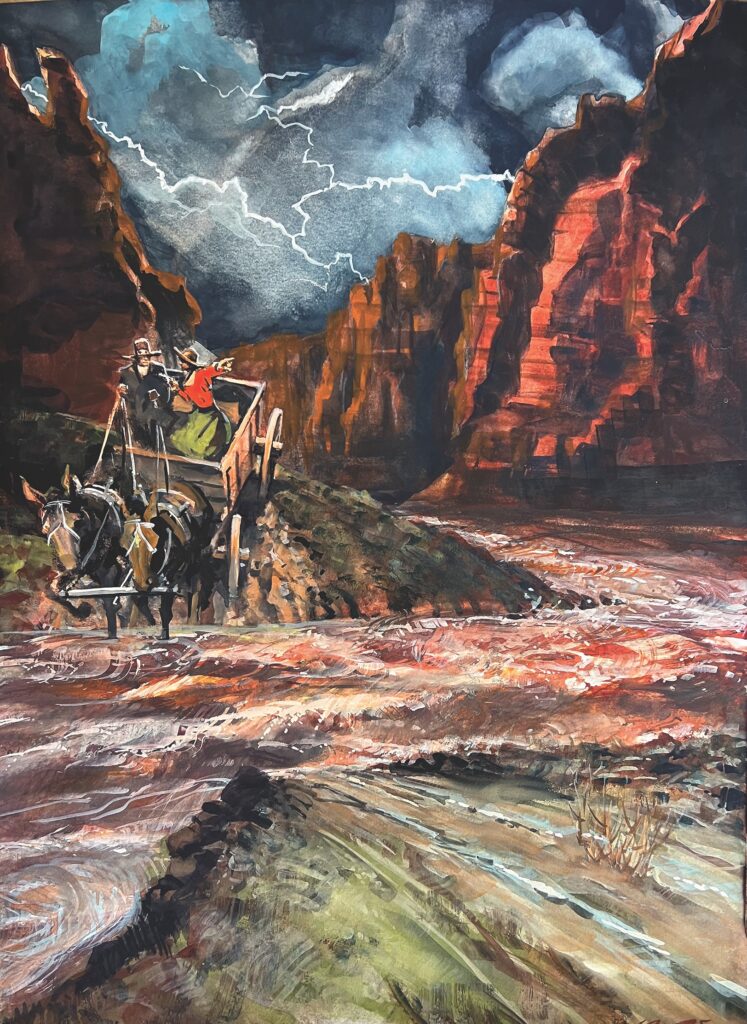 OK, it wasn’t that Grover Cleveland.

It’s August of 1911, and Sharlot Hall is again exploring Arizona Territory—this time in the Marsh Pass area near Tuba City. An Indian runner finds her and delivers a telegram that her beloved mother is in the Prescott Hospital. To get to her, Sharlot must intercept the Winslow train. She commandeers a buckboard and a Navajo guide named Grover Cleveland for an all-night dash across roadless terrain—and then was hindered by a violent storm that turned normally dry washes into raging torrents. When Grover refused to cross the swirling water—a most practical and responsible decision—Sharlot pulled a gun on him and demanded they go on.

She met the train and got to her mother’s bedside. Later she told her good friend, Alice Hewins of Phoenix, she “did not know which he was most afraid of, the road or Sharlot.” 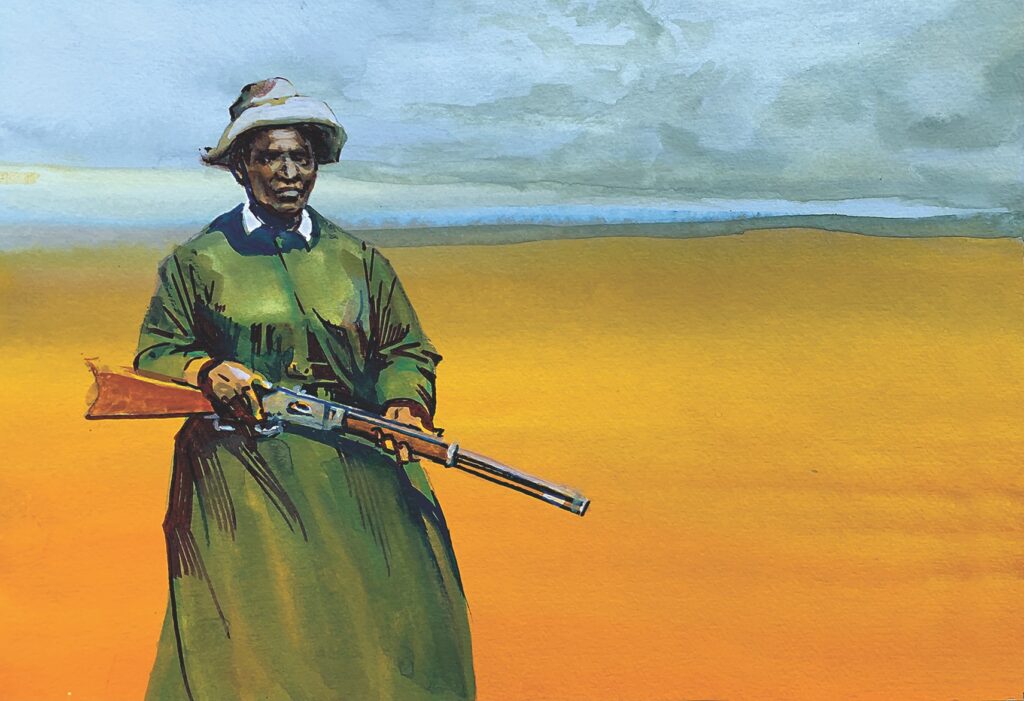 She had “the temperament of a grizzly bear.” She was tough (but not with children); she was bawdy; she was hard-drinking and quick shooting; and she loved her guns. Still, she was adored by the community who knew her as “Stagecoach Mary.” 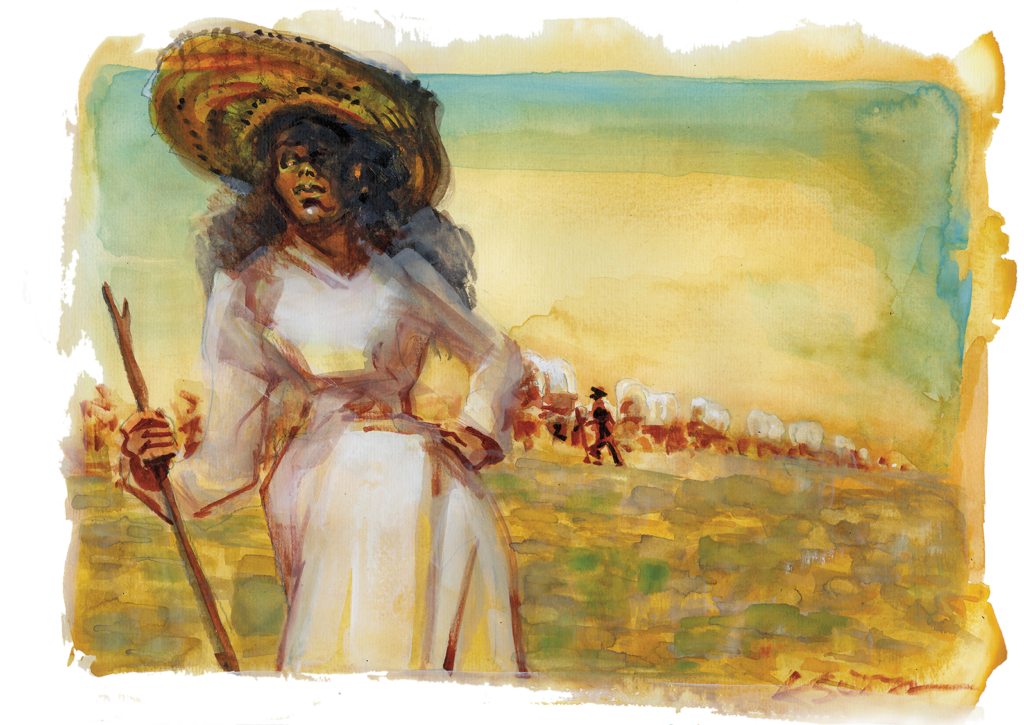 She was 29 years old, had already endured rape, had three daughters, and knew this was her life forever. And then she was forced to walk with the wagon train two thousand miles West, and everything changed. 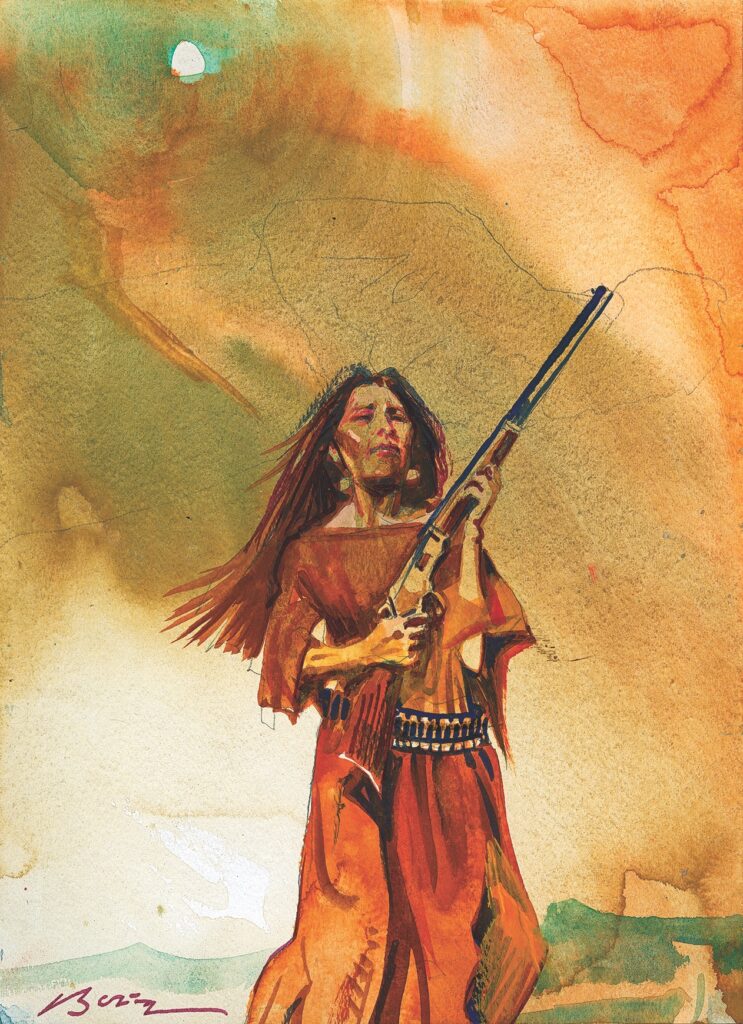 She was born into the Chihenne Chiricahua Apache band in their spiritual home of Ojo Caliente—between what’s now Silver City and Socorro in New Mexico.

Like all Apache children, she was trained in the skills of survival, with girls as well as boys learning to fight, hunt and ride. But while most girls then went on to marry and raise families, Lozen rejected that role. Instead, she trained as a warrior like her older brother.

The Queen of the Santa Fe Tidbits

Las Tules won many a monte game because of her distracting beauty and her ability to read the minds of the men she played against. 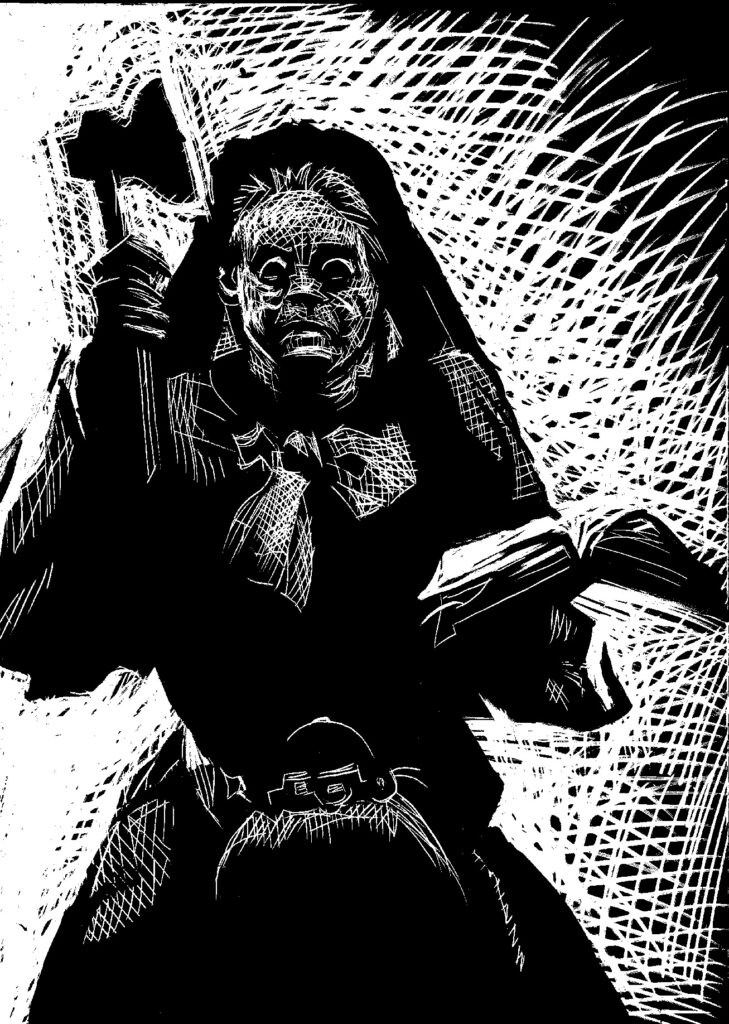 “I’m a bulldog running along the feet of Jesus, barking at what he doesn’t like.” —Carrie Nation aka “Hatchet Granny” 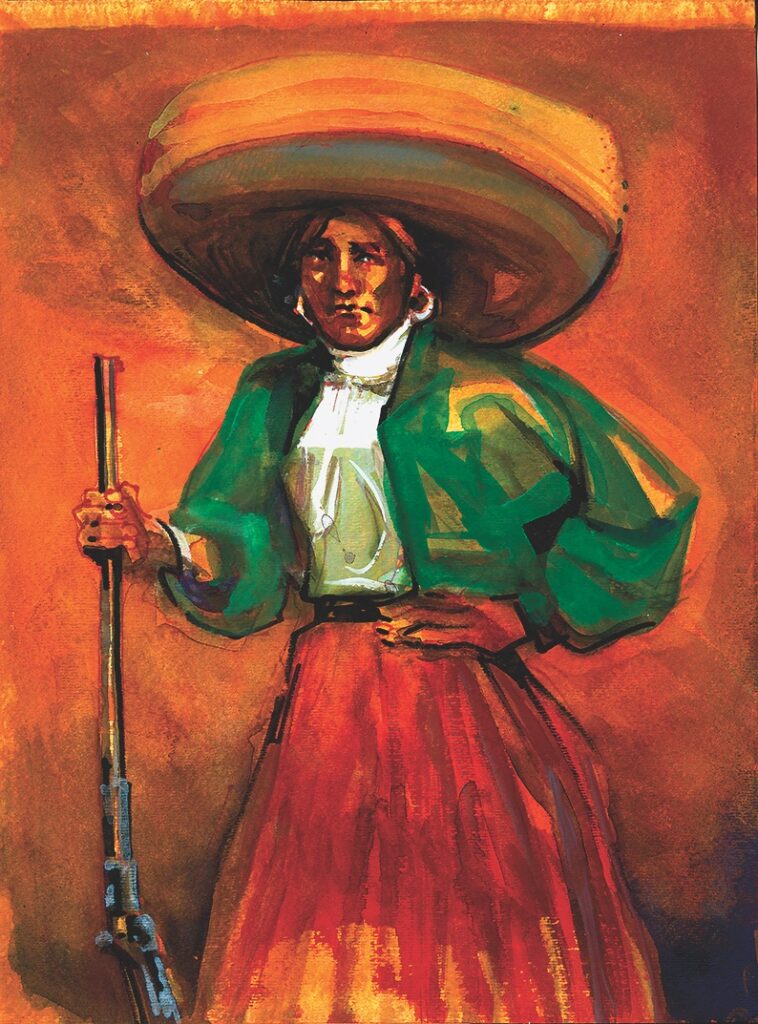 Some dressed as men, knowing generals like Pancho Villa resented them. But that didn’t stop these Soldaderas, these heroines of the Mexican Revolution. They are romanticized under the popular name of Adelita, from a favorite folk song of the revolution.

Petra “Pedro” Herrera, Angela “Angel” Jimenez, Amelia “Amelio” Robles Avila—these women stood out. They all dressed as men, and all rose through the ranks of the armies of Zapata, Venastiano Carranza and even Pancho Villa. Many other Soldaderas never saw battle, but played an even more crucial role, joining their men and providing the life support that kept the armies going: finding and cooking food, nursing the wounded. 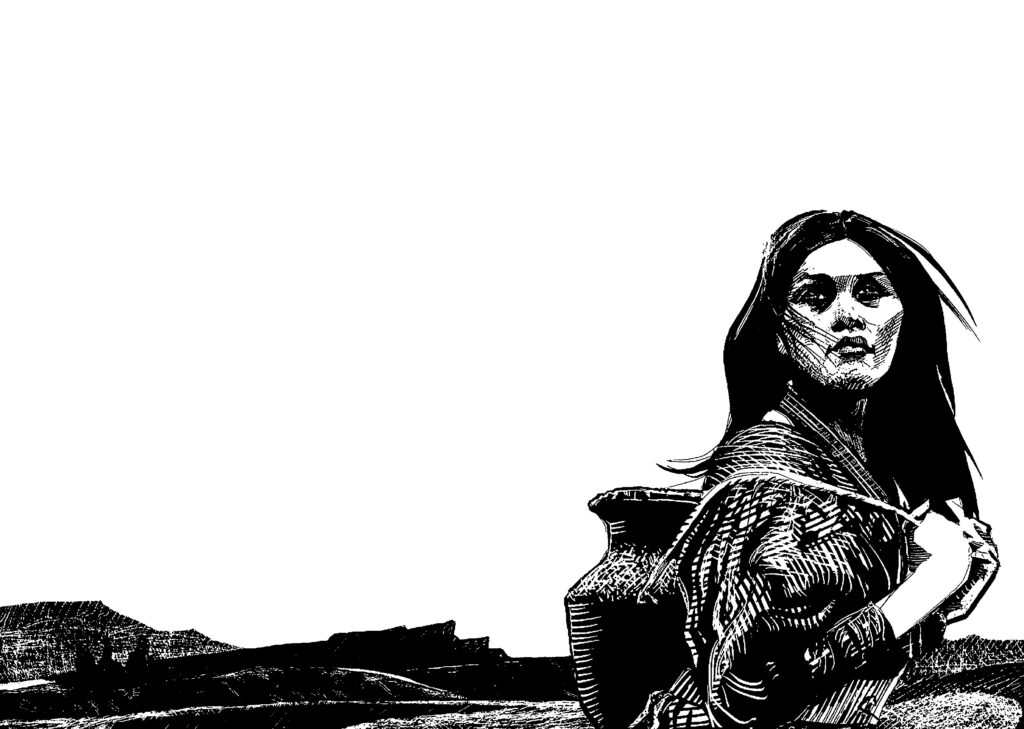 She started out her escape journey with two other captives, but they were soon captured.  Her meager rations quickly ran out and she had to subsist on seeds and cactus fruit. She couldn’t swim and yet she got across the Colorado River. She didn’t have a map, but she made it to the White Mountains. Chalk it all up to being an Apache. Stubborn, resilient and
resourceful. Amazing. 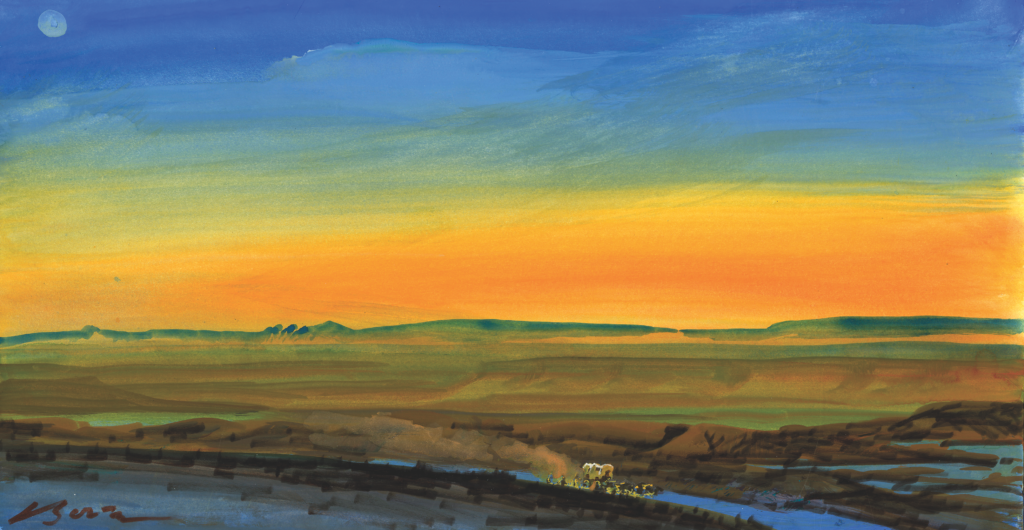 The Oatmans began their ill-fated journey on a wagon train that had some 93 members riding or walking beside 43 wagons bound for The Land of Bashan (today known as Yuma). Petty infighting, alternative visions and illness took their toll. So much so, that by the time they reached Socorro, New Mexico, their ranks had been cut in half.

And by the time they reached the Gila River west of the big bend, in Arizona Territory, the wagons had been reduced to only one. The tragedy that ensued and the captivity of the Oatman girls is reexamined and new truths are revealed. 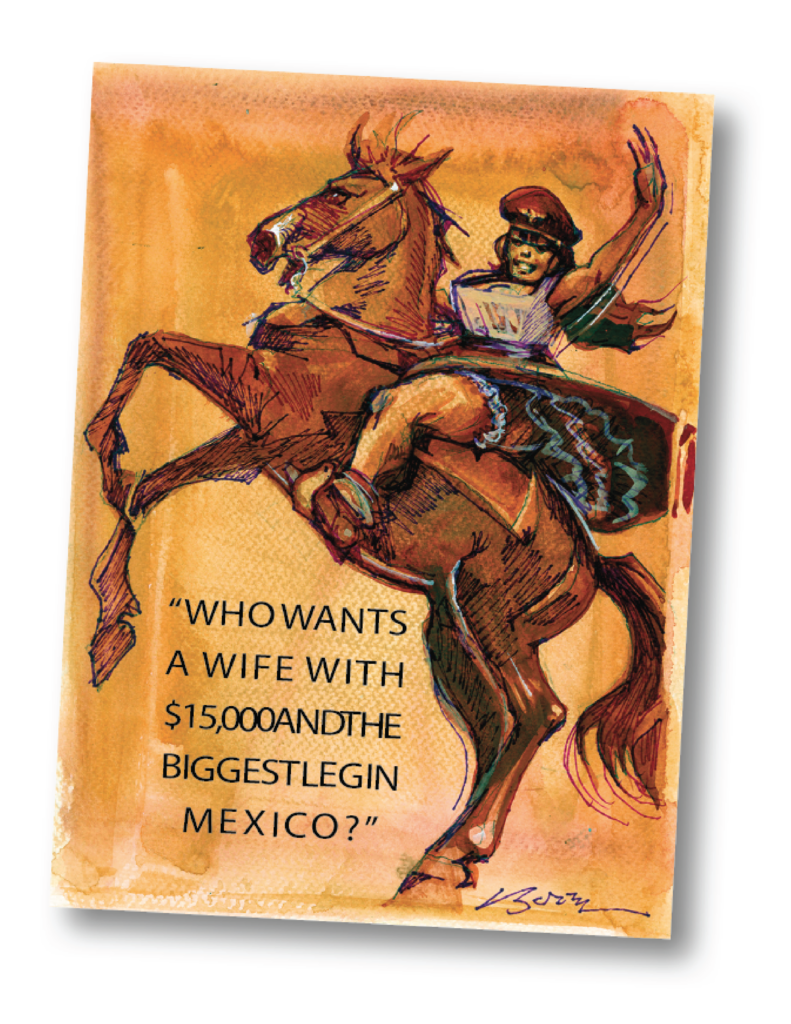 They called her “The Great Western,” after the largest ship then on the sea. She went through a whole variety of names over a lifetime of multiple husbands. 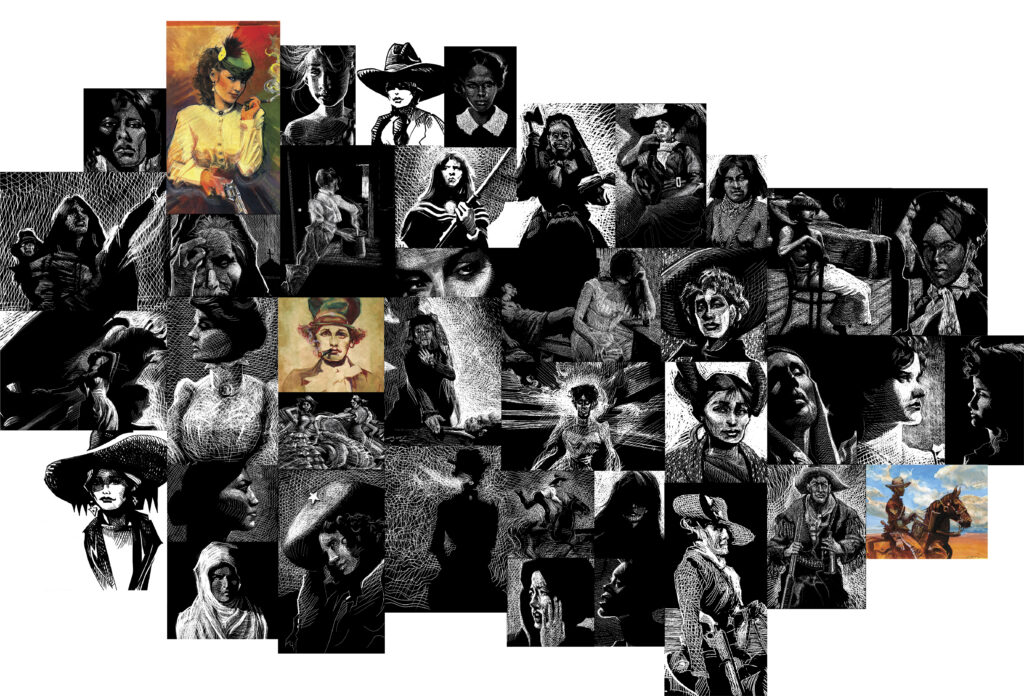 A signature piece in the book is this cascading collage encapsulating and reflecting the real women of the Wild West experience. The book and the art show will premiere on November 4, 2022 at the Phippen Art Museum in Prescott, Arizona.