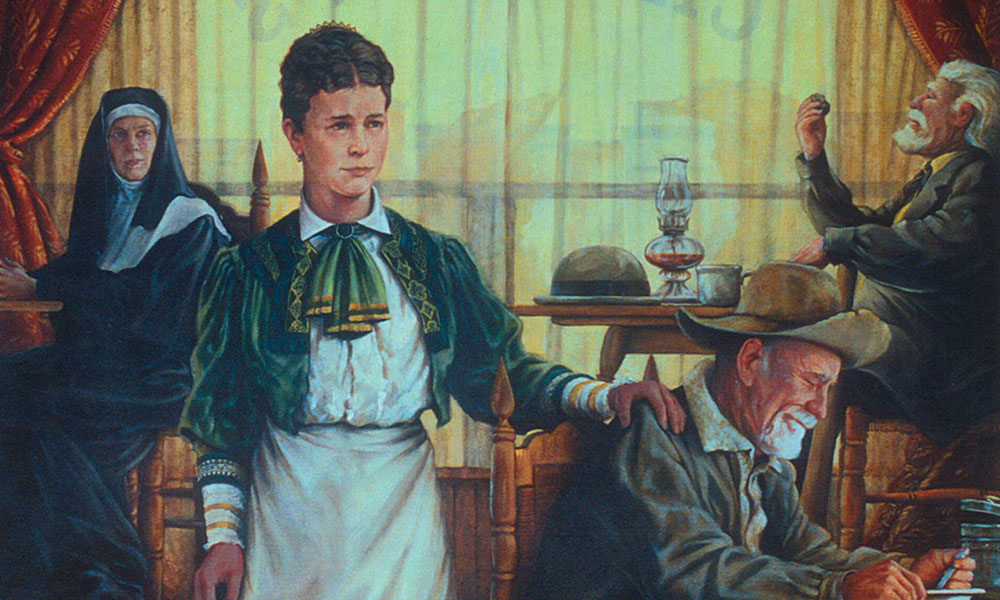 Nellie Cashman was the quintessential gold mining stampeder. For more than fifty years she combed the mining camps of the Far West. Her adventurers took her throughout the American West, south into Mexico and north to Canada and Alaska. Along with a keen sense of business and geology, she was also blessed with the “luck of the Irish.”

Nellie, a slender, petite lady barely five feet tall, with dark hair and large, luminous eyes had many suitors but she preferred to stay single.  Married women, even in the West, had too many restraints and Nellie was a free spirit filled with wanderlust.

Did being a pretty lady alone in a wilderness with a bunch of love-starved men ever pose a problem?  Not according to Nellie. When asked, she’d smile sweetly and with her Irish brogue would reply, “If you act like a lady, men will treat you like one.”

The years 1877 to 1898 were spent in Arizona, operating successful businesses in several towns including Tucson where she arrived in the fall of 1878 nearly two years before the arrival of the Southern Pacific Railroad. She opened a restaurant and named it Delmonicos. She would use that name more than once. The billboards advertised it as having the “Best Meals in the City.”

When she learned of the great silver strike at Tombstone seventy miles southeast of Tucson, she pulled up stakes and headed the new silver camp, arriving in 1800.

A few months later, in February, 1881, her brother-in-law, Tom Cunningham, died of tuberculosis in San Francisco. Frances, suffering from the same disease, packed up their five children and joined Nellie in Tombstone.

Two years later, July 3rd, 1884 Frances died, leaving Nellie to raise the children.  Her dying request to Nellie was to raise her children and give them a good education.  Nellie fulfilled that promise.

Now a single mom, she was busy raising five kids and running the Russ House in Tombstone during the heyday of the legendary “Town Too Tough to Die.” She quickly became one of the most influential leaders in the rough-hewn mining camp and was a resident at the time of the notorious “Gunfight at the OK Corral.”

During the Christmas season of 1883 in Bisbee, five men pulled a robbery killing four innocent people including a pregnant woman. They were caught, tried, convicted and sentenced to hang. Nellie took it upon herself to be their mother confessor.

An entrepreneur built a grandstand outside the high walls of the Tombstone Courthouse and sold tickets to watch the hanging. The condemned men pleaded with Nellie to not let their hanging become a public spectacle.

So, the night before the hanging Nellie and some friends arrived with tools in hand and tore it down. Authorities had planned to donate their bodies to medical science. The five men pleaded with her let their bodies rest in peace so she saw to it they were given a proper burial and hired a guard to protect the graves for several days.

In 1885 Nellie joined a party of prospectors on an ill-advised expedition into Mexico. It turned out to be a hoax so Nellie hired a boatman to take them back to the Mexican port of Guaymas. He got drunk and nearly capsized the craft so she took charge and locked him in a closet. Then she piloted the boat to Guaymas.

By the time they arrived at the Mexican seaport town he had sobered up and charged her with piracy on the high seas. All ended well when she turned her Irish charm on the authorities and the party returned safely to Arizona.