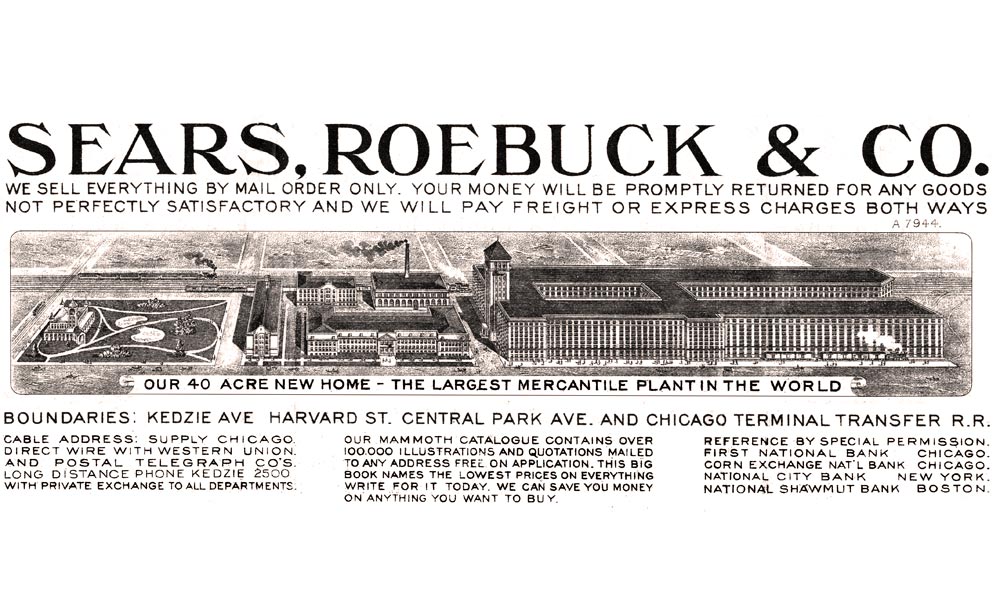 Readers in 1897 were captivated by two books that have gained immortality in the literary world—Quo Vadis by Henryk Sienkewicz, and Stephen Crane’s The Red Badge of Courage.

But neither was read as voraciously, as raptly, as delightfully as a bulky volume sent post-free to millions of American homes—the “Consumers Guide” that we now know as the Sears Roebuck catalogue and billed as “the cheapest supply house on earth.”

Its arrival surely deflated regular work production, as every member of the family waited their turn to page through the 770-page “Wish Book” that held anything and everything they’d ever want. And Sears promised it was so easy to bring those delightful items to your very own doorstep.

“Don’t be afraid you will make a mistake,” the catalogue reassured rural mail order customers. “We receive hundreds of orders every day from young and old who never before sent away for goods. We are accustomed to handling all kinds of orders. Tell us what you want in your own way, written in any language, no matter whether good or poor writing, and the goods will promptly be sent to you.”

Written in any language—Sears knew how to appeal to everyone, assuring immigrant and native alike that there was something special here just for them! And they were generous with the word “guarantee.”

“The company offered fantastic guarantees,” notes Fred L. Israel in the preface to a 1968 facsimile of the 1897 catalogue. “The sewing machine could not only sew and sew satisfactorily, but it could also sew better than any other sewing machine in the world. Sears guaranteed the bobbin, the shuttle, the treadle, the leather belt for the treadle, the solid golden oak cabinet, the varnish, and the linseed oil used to bring out the grain. Sears guaranteed safe arrival and pioneered in early status-striving motivation: ‘the neighbors would admire it once they were permitted to inspect it.”

Sears had hit upon a gold mine all its own. In 1895, the company was capitalized at $150,000. Twenty years later, its assets were in excess of $100 million. And the credit goes to that fat catalogue. Now, THAT’s a best seller.