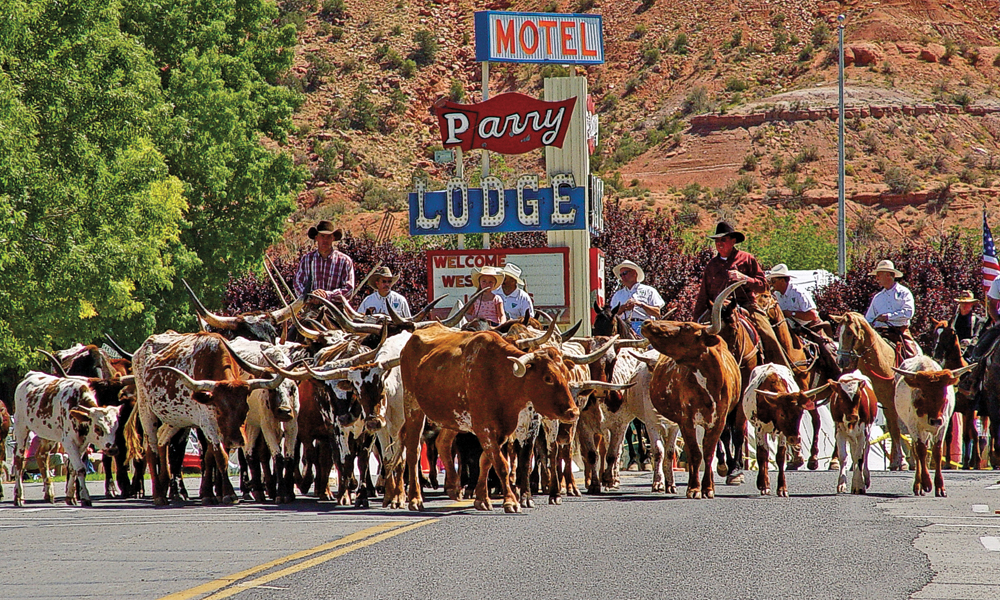 When pioneers settled on Kanab Creek in the late 1850s, they faced hostile Navajo, Paiute and Hopi Indians. Several attempts at settlement ended in bloodshed before Mormon missionary and frontiersman Jacob Hamblin brokered peace with the tribes.

The area Hamblin helped tame is now a town of 4,500 set against the beautiful sandstone canyons of southern Utah. Kanab takes its name from the Paiute word meaning “place of the willows.”

But the most popular might be 70 miles away at Coyote Buttes Permit Area, specifically an area called the Wave, known for its wild colors and incredible rock formations. For those who can’t secure a BLM visitor permit—only 20 are issued a day—Bob Riding, a host at the Kane County Visitors Center, recommends a second site in the same area.

“The White Pocket is huge and just as beautiful,” Riding says. “The swirling rocks are all orange, white and red.” For a nearer option, try Peek-a-boo Canyon, a slot canyon about six miles north of town that’s so narrow and deep the sun rarely brightens the bottom.

Kanab’s natural beauty has made it a movie-making hub, beginning with the 1924 picture, The Deadwood Coach, starring Tom Mix. The trend continued with Cecil B. DeMille’s Union Pacific and John Ford’s Drums along the Mohawk, both released in 1939.

The movie industry helped sustain the town during the Depression. As one wag said, it “kept the kids from eating the putty out of the windows.”

“Local people got income renting their horses, cattle and trucks for the crews to go on location,” says Deanna Glover of Kanab Heritage Museum. “Women did laundry for them because we didn’t have a laundromat.”

Kanab marks that legacy at Western Legends Roundup, a raucous, three-day celebration in August during which downtown streets close to accommodate parades, displays, vendors and a longhorn cattle drive. Mountain men and decked-out cowboys mingle with Western movie actors who sign autographs and chat with fans.

Visitors also enjoy the Little Hollywood Museum, complete with movie artifacts and rebuilt sets from the roughly 100 pictures filmed in the area, including The Outlaw Josey Wales. The venue offers meals and shows as well.

Architecture-lovers should take the Heritage Tour of Kanab’s historic homes, including the original 1892 mercantile, now the Rocking V Café, a popular bistro and one of the few places in town that serves drinks. The Heritage House Museum, housed in a restored Victorian on the National Register, features artifacts and reproductions of historic photos available for purchase.

Kanab also offers several interesting short drives. Seventeen miles away, the former home of artist Maynard Dixon serves as a nonprofit arts foundation, open for tours. Pipe Springs National Monument, 20 miles out, offers a look at a fort built over a desert spring in the 1870s.

An easy ten-mile jaunt brings visitors to Fredonia, Arizona, and the Buckskin Tavern, said to be the longest bar in Arizona. The more adventurous can stay on U.S. 89A through House Rock Valley and see the stunning Vermilion Cliffs National Monument, where California condors roost.

Landscape of such rare beauty inspires many legends. One of the best-known involves the outlaw Butch Cassidy, a southern Utah fixture since his legendary train-robbing days. Many historians believe he died, with the Sundance Kid, in a shootout in San Vicente, Bolivia, in 1909.

Nonsense, says the still-told tale. In 1991, a retired highway patrolman told a newspaper that he pulled Cassidy over on a road near Kanab in 1941. The trooper said the ticket was just a warning, which made sense. Old Butch wasn’t likely to pay up anyway.