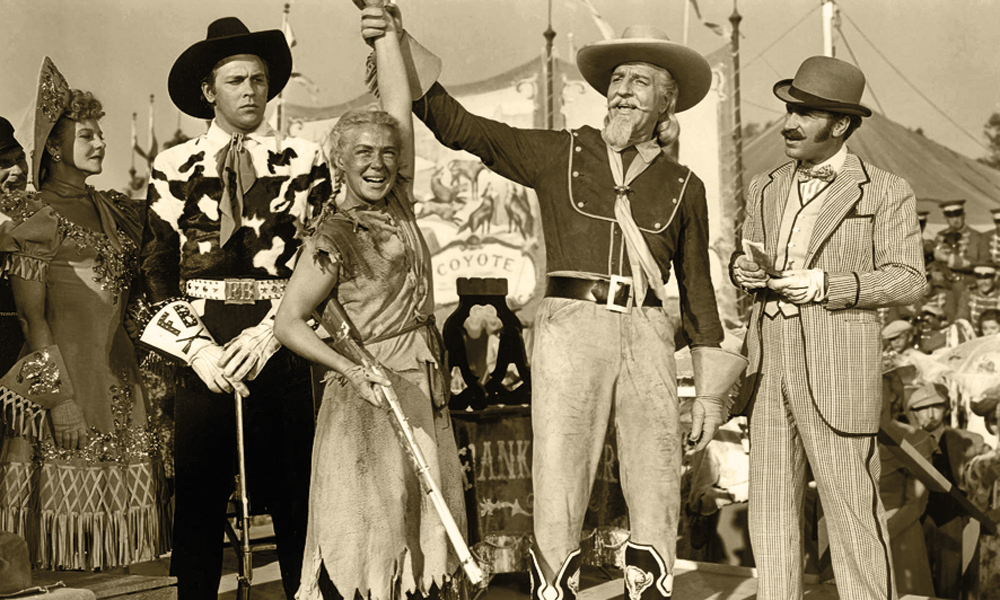 There’s no business like show business, if you tell me it’s so.

Traveling through the country is so thrilling.

Standing out in front on opening nights.

Smiling as you watch the benches filling.

And see your billing up there in lights.”

After Annie Oakley beats sharpshooter Frank Butler in a shooting contest, William F. “Buffalo Bill” Cody and his Wild West show manager, Charlie Davenport, sing these words from, what would become the unofficial anthem of the theatre world, “There’s No Business Like Show Business,” to convince Oakley to join the show. Irving Berlin wrote the song for the 1946 musical Annie Get Your Gun, which was reprised in the 1950 movie of the same name, starring Betty Hutton as Oakley.

The message of the musical was that the “show business” of the Wild West show also applied to Oakley’s real life: just like many women returned to their domestic roles after the conclusion of WWII, Oakley intentionally loses the final shooting match against Butler so she can gain his love and hand in marriage. This fiction could not be further from the truth.

Yes, the two met at a shooting contest, which Oakley won against the well-known Butler. But they fell in love and married years before the sharpshooters joined up with Buffalo Bill’s Wild West. Butler had no qualms
about Oakley’s star status, comfortably serving as her manager during the nearly 20 years they toured with Cody’s show throughout the U.S. and Europe. In fact, the love between the two was so strong that, in 1926, when Oakley died at the age of 66, Butler was so heartbroken, he reportedly starved himself and died two weeks later. Even more, Oakley not only thought women were capable of “male” jobs, she believed they should serve in wars! She offered President William McKinley 50  “lady sharpshooters” for service in the Spanish-American War of 1898, but he turned her down.

That the cinematic West is not often true to history is such an age-old maxim that Hollywood even put it in a movie: “This is the West, sir. When the legend becomes fact, print the legend.” Attire from that 1962 movie, The Man Who Shot Liberty Valance, joined a rifle owned by Oakley, and other show business lots, in bringing Hollywood’s Old West into the hands of collectors. Brian Lebel’s Old West Auction, held on June 10 in Fort Worth, Texas, hammered down at nearly $850,000.