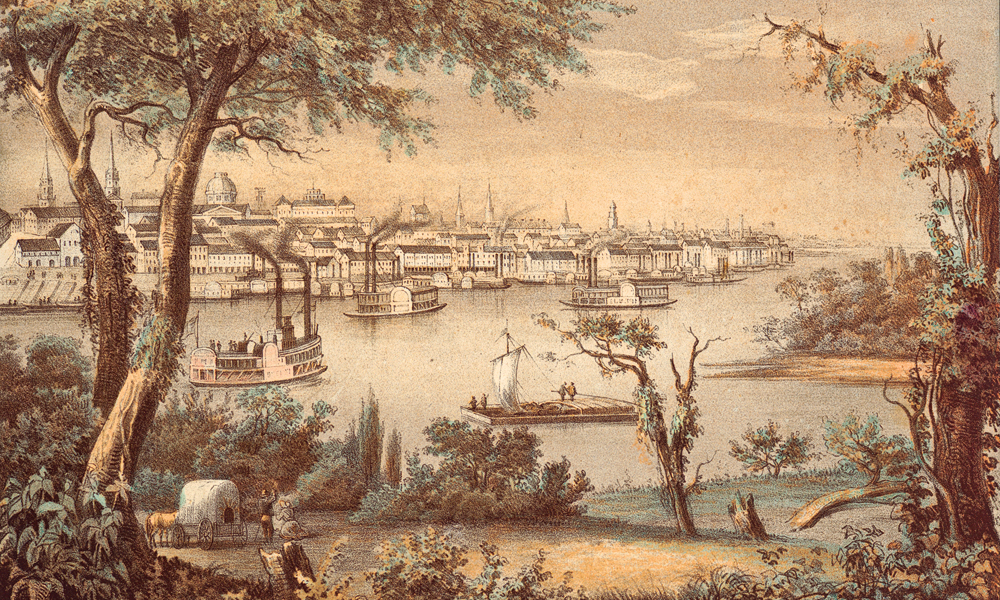 Wilson Price Hunt set out from St. Louis in early summer 1811 with a company of 56 men, an Indian woman, Marie Dorion, and her two children. He would follow the Missouri River on a route partially explored just half a decade earlier by Meriwether Lewis and William Clark. His party, financed by John Jacob Astor, was the first expedition in a quest to develop the American beaver trade.

The Hunt Company traveled the Missouri River by barge and keelboat, but I’m not a river rat under any circumstances, so my route is land-based from St. Louis west to Kansas City, and then north to Omaha. In Omaha you’ll want to visit the Joslyn Art Museum, with its collection of works by Karl Bodmer, Alfred Bierstadt and George Catlin. North of there, at DeSoto Wildlife Refuge (Midway between Blair, Nebraska, and Missouri Valley, Iowa), see the goods of the 19th century dredged from the Missouri River mud where they were buried following the sinking of the steamboat Bertrand. More than 250,000 artifacts have been uncovered. This is a good area to view waterfowl and other wildlife Hunt’s party may have encountered.

Across the Great Plains

Continuing on north across Nebraska, Hunt’s trail crosses into South Dakota, following the Missouri. Just west of Fort Pierre, visit the site of the Vérendrye Monument, just northwest of the confluence of the Bad River and Missouri River. This site is one of only a few points absolutely associated with certainty to the early European exploration of the Great Plains. It represents the travels of Frenchman Pierre Gaultier de la Vérendrye and his sons. More than sixty years before Lewis and Clark and Hunt’s expedition passed through, Francois and Louis-Joseph Vérendrye embarked on a journey to find a water route to the Pacific Ocean. They were in this region in 1742, but failed to find the Northwest Passage.

In this area, near what Hunt identified as the “Aricaras’ village,” in mid-July of 1811, his group forded the river. Some of the men continued north to the Mandan Villages, (located near present-day Bismarck, North Dakota), where they obtained horses. They would take the horses back to the main party, which then abandoned the river as a means to transport their goods. With the horses carefully loaded, they turned west.

Before long, Hunt wrote in his journal, “We had covered sixty-seven miles, keeping our course a little more to the west in the prairies, where the grass was knee-high and where the horses could graze contentedly. The countryside was bare except for a few cotton-wood trees growing along the rivers…. I visited the camp of some Cheyenne Indians. I bought thirty-six horses there at a price better than that which I paid the Aricaras. Their camp was in the middle of a prairie near a small stream. These Indians burn buffalo chips to keep themselves warm. Their teepees are made of buffalo skins carefully sewn together and supported by poles joined at the top. They often hold as many as fifty people. The Cheyennes are honest and clean. They hunt buffalo, and they raise horses that each year they trade to the Aricaras for corn, kidney beans, pumpkins and some merchandise. They had a dozen beaver skins, but they did not seem to know how to trap these animals.”

Hunt’s route crossed what is now northern South Dakota before cutting to the southwest passing through the Lakota territory of the Powder River Basin in present-day Wyoming and then ascending the Bighorn mountain range.

Hunt wrote: “The terrain was extremely rugged…we could find no passage through these mountains. We killed a big horn whose meat is good, not unlike mutton. Usually we found these animals on mountains where no other animals could go. Several ran and leaped on the very edges of precipices. We also saw some black-tailed deer, larger than the red deer and with very big ears.”

Crossing the rugged mountains to the west of present-day Sheridan and Buffalo, Wyoming, became too challenging and ultimately Hunt traveled south, dropping out of the Bighorns and skirted around their southern flank before traveling west. (To follow his route, take Interstate 90 south to Sheridan and Buffalo, Wyoming, then I-25 to Casper and Highway 20-26 west through Shoshoni and Riverton, and continuing on to Dubois, Wyoming).

I deviate from Hunt’s route in Montana and drive west on I-90 to Billings, before I detour south to visit Chief Plenty Coups State Park, site of the last home of the Crow chief, before following US 212 to Cooke City, Montana. The crossing of the Beartooth Mountain Range is breathtaking, and will give you a sense of what it was like for Hunt and his party to make their own rugged attempt to cross the Bighorns farther east. My route continues through Cooke City and Yellowstone National Park to Jackson Hole.

Hunt and crew, meantime, had traversed a much easier type of terrain once they descended from the Bighorns. The land-scape on their route was less demanding, but certainly it was not well watered. As he wrote, “The great heat, the treacherous
trail, and the lack of water caused much suffering.”

Ultimately they entered the Wind River Basin. “We crossed and recrossed the Wind River as well as two of its tributaries, the larger of which flowed from the northwest,” Hunt wrote. “[Then] the mountains closed in and the countryside became very rugged, the footing tortuous among the high peaks. On the 15th we left the river and, trekking southwest, followed an Indian trail into the mountains.” They were now in the vicinity of Dubois, Wyoming, soon to ascend Togwotee Pass.

The Hunt party already had word of what they would find on the other side of the pass. “One of our hunters who had been on the banks of the Columbia pointed out three immense and snow-covered peaks” which, he said, bordered a tributary of the river. French Canadians would name these three peaks, Les Trois Tetons, and the river below became known as The Mad.

These signature peaks are a part of the Grand Teton mountain range, including The Grand Teton—which Hunt referred to as Pilot Knob. And the river is better known by its modern name: The Snake.

In Dubois, Wyoming, schedule time to visit the Wind River Historical Center and nearby Center for North American Wild Sheep. In Grand Teton National Park, take time to stop at Colter Bay Visitor Center, which has an excellent collection of Indian artifacts and moccasins. The National Wildlife Art Museum just outside the town of Jackson and the Jackson Hole Museum downtown, are both worth a visit.

Hunt’s route did not descend into Jackson Hole, but instead traversed the Wind River range, likely over what became Union Pass, and dropped toward the Green River drainage before following the Hoback River and crossing into Pierre’s Hole, in today’s Idaho. Hunt then built canoes and began descending the Snake River. But the journey was treacherous. They capsized their canoes, losing supplies in the rough water. At times they had to portage around rough stretches and waterfalls.

They swamped more boats, lost more cargo, and by the time they reached Caldron Linn, were in desperate straits. Here they divided the party. Hunt and a portion of the group continued down the Snake, while other members traveled overland, swinging wide to the north before striking the Columbia River near its confluence with the Snake.

I follow Hunt’s route through Boise, Idaho, to Ontario, Oregon, and over the Blue Mountains to Pendleton.

Hunt’s main party reached the banks of the Columbia River on January 21. He wrote that day, “We had come 1,751 miles and had lived through unbelievable hardship and privation. I expressed with difficulty our joy at the sight of this river. It was three quarters of a mile wide here.”

Upon reaching the Columbia, Hunt’s group crossed to the north bank (on the advice of local Indians), hearing that the traveling would be easier there. Of course he also had information from Lewis and Clark’s expedition, which had traveled along the north bank of the Columbia.

Hunt camped opposite the mouth of the Deschutes River and the following day passed Celilo Falls. This was (and remains) an important fishing spot for the local Indians.  “This is the great fishing ground of the Columbia,” Hunt wrote. “It looks like one of the seaport villages on the east coast of the United States. On both sides of the river we saw large platforms made of carefully woven stakes. On these the Indians dry their fish. The ground around them is covered with bones and heads of fish. In the spring when the river waters are high, the salmon arrive in schools so large that the Indians can catch them in purse nets attached to the ends of poles. To accomplish this they stand on the edges of those rocks that extend farthest in to the river.”

As more tributaries flowed into the Columbia, the great river became much bigger, at one point downstream from the confluence of the Sandy River Hunt said it was “about a mile and a quarter wide. On both sides we found vast rush-covered areas, some small prairies, and often some ponds. Seals were numerous here.” Mt. Hood was visible, and the weather turned with strong winds, rain, hail and even snow. Traveling on the river again, they eventually paddled through a large bay and soon saw Fort Astoria on the south bank. Before reaching Fort Astoria on February 16, they had, according to Hunt, “covered 2,073 miles since leaving the village of the Aricaras.”

This journey set up the exploration of the American West by fur trappers, and that fall would lead to discovery of South Pass (found by some of the Astorians returning east to St. Louis), which became the conduit for more than half a million people traveling to Oregon and California.

Road warrior Candy Moulton loves exploring the American West, following the trails of the people who forged them centuries ago.