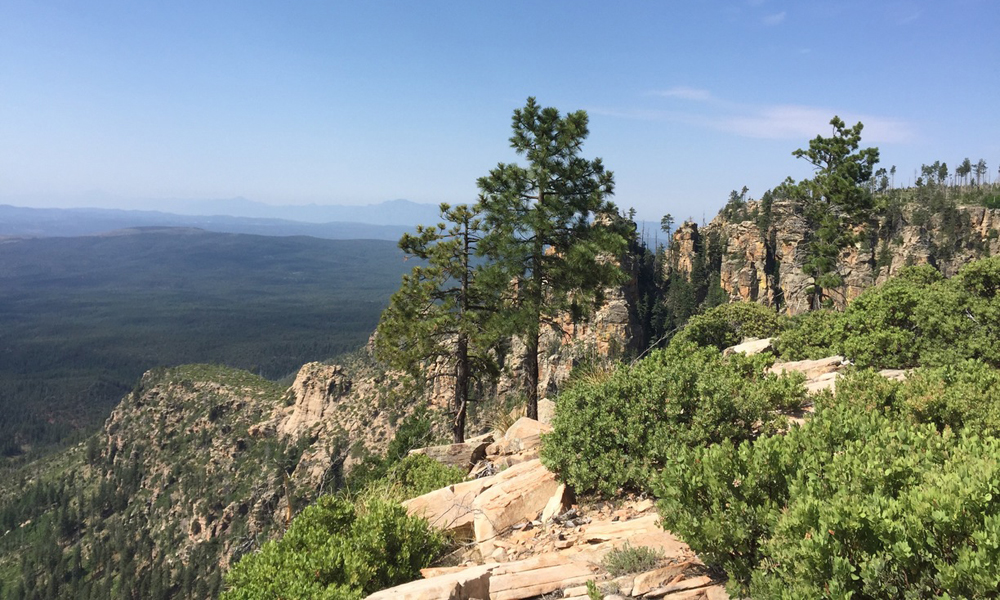 Arizona is known for its number of hard-to-pronounce place names. A story is told of a tourist who was bound and determined to learn the correct pronunciation of every place he encountered. He pulled into the town of Ajo, stopped at a little fast food establishment and asked the waitress, “How do you pronounce the name of this place?”

Mogollon is another one of several words including tortilla, Gila, saguaro and cholla that confounds newcomers, visitors and especially newly-arrived television weather forecasters from anywhere east of the Mississippi River.

It is one of the most mispronounced names in Arizona. Most agree it should be pronounced “Muggy-yawn” or “Muggy-own.” Tourists often say, “Mongolian.”

Most believe the Mogollon Rim (moggy-yawn) was named for Juan Ignacio Flores Mogollon the colonial governor of New Mexico, 1712-1715.

It’s called Arizona’s “Backbone,” and it stretches diagonally across the state from the top of Ash Fork Hill on old Route 66 between Ash Fork and Williams to the White Mountains some 200 miles from northwest to southeast. Best way to appreciate it is approaching Payson, where it abruptly rises a thousand feet in elevation and separates the Plateau country from the Central Mountains. It was formed by geologic faulting. The White Mountains are an extension of the Mogollon Rim.

There is also a mountain range in western New Mexico called the Mogollon Mountains, along with an old mining town that bears the same name.

Dr. Byrd Granger in her classic X Marks the Place: Historical Names and Places in Arizona says it may derive its name the governor and that’s what I’ve always said however, she does say it might come from a local infestation of such parasitical plants such as the mistletoe which in Spanish is “mogollon.” It will eventually kill the tree. It’s commonly found on the ponderosa pines. The largest stand of ponderosa in the world is found in the Rim Country.

The famed Franciscan padre, Tomas Garces, in 1775 called them the Sierra del Mogollon. In 1851 Lt. John Parke of the U.S. Army Corps of Topographical Engineers, referred to them as Sierra Mogoyone, probably a phonetic interpretation learned from his Mexican guides.

I might add Juan I. F. Mogollon didn’t have a long or distinguished political career as governor but he did excel as a soldier. He also may have encouraged development of mining in what is today Catron County. The region around Silver City, Pinos Altos and the old mining town of Mogollon did produce some $15 million in gold, silver and copper since 1889. Spanish and Mexicans mined the area for copper during the 18th and 19th centuries.

If you stuck a six-shooter in my face and said, “Is it named for the Spaniard or the parasite?”

I would say the Spaniard.