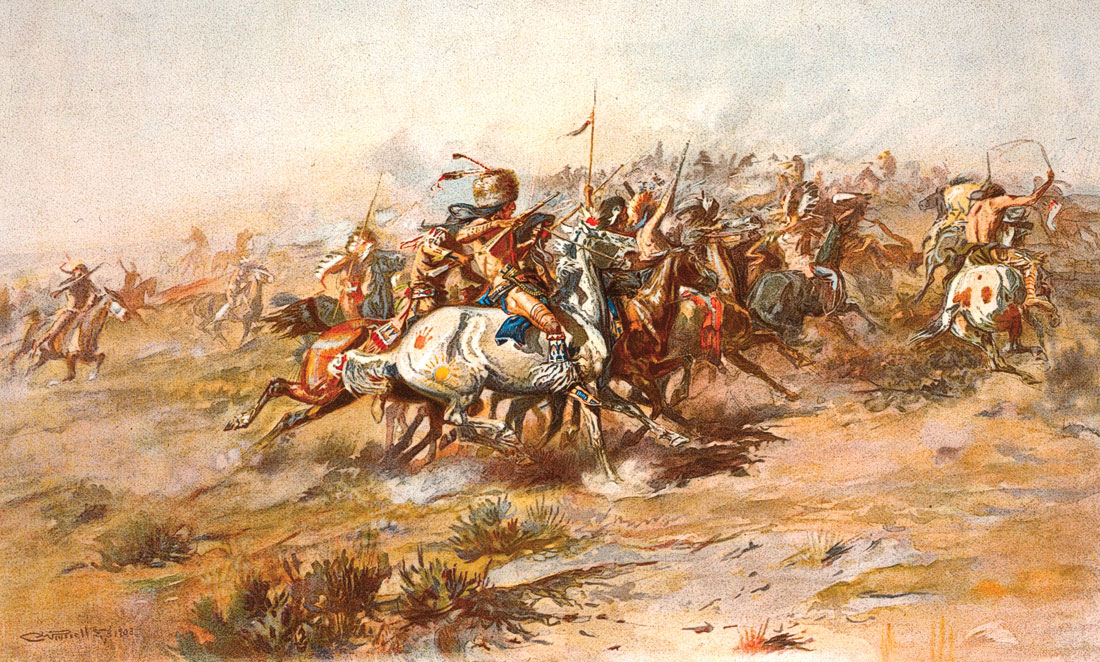 In the history of the West, June will forever be remembered as the month in 1876 that saw the Battle of the Little Bighorn, or “Custer’s Last Stand.” But the month holds many other distinctions worth noting.

On June 2, 1899, the Wild Bunch robbed a train in Wilcox, Wyoming, and met a defiant train engineer named W.R. Jones, who refused their demands to uncouple the express car. When the gang blew up the car, Jones came hurling out as bank notes and securities–$30,000 worth—were blown every which way. Gang member Harvey Logan rushed over to put a bullet in Jones’ head, but was stopped by Butch Cassidy, who said, “Now, Harvey, a man with that kind of nerve deserves not to be shot.”

It also saw some notable deaths: Apache Chief Cochise died of natural causes at the age of 62 on June 8, 1874; in Leavenworth, Kansas, Carry Nation died at 64 on June 9, 1911, on the eve of the national alcohol prohibition she had tirelessly and violently advocated. America lost “The Duke” on June 11, 1979 when Marion Michael Morrison, aka John Wayne, died of cancer at age 72. Frontiersman Jim Bridger died on June 17, 1881 at age 77. And poor John Sutter, on whose property gold was first discovered in California, died penniless on June 18, 1880 at the age of 77. On June 23, 1946, cowboy actor William S. Hart died in Los Angeles at the age of 75. Jesse James didn’t die in June, but he did disguise himself on June 22, 1877, to serve as pallbearer for his friend, John Sallee, Jr.

June was a special month for Belle Starr. It was her wedding anniversary—at least one of them—for she married Sam Starr on June 5, 1880; never mind she was already the wife of Bruce Younger.

And you can bet that Buffalo Bill saw June as a great month, since on June 20, 1887, his Wild West Show was performing in London for Queen Victoria.

A big payday was earned on June 7, 1876 when the James-Younger Gang took $100,000 from a Missouri-Pacific express car near Ottersville.

But all that seems to pale when considering the bloody ending of the month in 1876. Millions of words have been written about the Battle of the Little Bighorn and all that led up to it—from the army side, one of the greatest loses; from the Indian side, one of the great victories. In the June 25-26 battle, Chief Sitting Bull and Chief Crazy Horse massacred Custer and over 270 men of his 7th Cavalry in eastern Montana Territory. Three interesting footnotes: Black cowboy Nat Love, who’d earn the name “Deadwood Dick,” was on a cattle drive with 2,000 longhorns en route to Deadwood on June 25, 1876, only sixty miles from the Little Bighorn. He later wrote, “We did not know at the time or we would have gone to Custer’s assistance.” On June 27, 1876, Captain Miles Keogh’s horse, Comanche, was found with seven wounds while drinking water from the Little Bighorn. He was the only survivor on the army’s side. Indian Little Soldier reported that Captain Keogh died holding Comanche’s reins with one hand and firing with the other, explaining his survival with, “no Indian would take that horse when a dead man was holding the reins.” And on June 25, 2003 at the site that is now the Little Bighorn Battlefield National Monument, the National Park Service dedicated the Indian Memorial in “honor of all the tribes defending their way of life at the Battle.” It joined the 7th US Cavalry Memorial and the Custer National Cemetery.