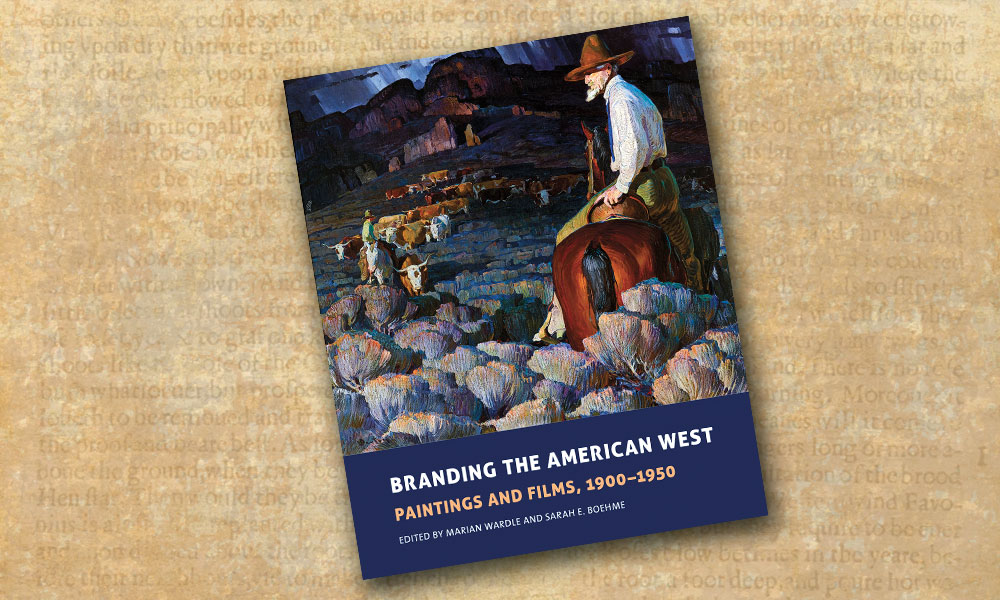 Branding the American West: Paintings and Film, 1900-1950 (University of Oklahoma Press, $39.95), edited by Marian Wardle and Sarah E. Boehme, is a collectible art book, with seven status-quo challenging essays from a broad spectrum of current Western scholars of art, history and popular culture. Wardle and Boehme—curator at the American Art at the Brigham Young University Museum of Art, and curator at the Stark Museum of Art, respectively—state in their introduction: “From the twenty-first century, the viewer can now look at these works with sharpened perception, acknowledging the power of the compelling images, while seeing them in a more comprehensive social and historical context.”

The twenty-third volume in the Charles M. Russell Center on Art and Photography of the America West Series is visually beautiful, a true collectible for aficionados of Western American art. The book’s editors have collaboratively selected more than 150 art and film images from a joint project between the BYU and Stark museums, that grew into the book and exhibition titled Branding the American West. The introduction outlines the book’s goal and offers a contextual  discussion of the six essayists and their respective chapters. The editors and authors provide historical context, critique and personal opinions
on the value and cultural influence of Western art and artists on our collective understanding of the West. Wardle and Boehme write that  what emerges is “a complex vision that both supports and contradicts the enduring brand of a Wild West of conflict.”

Branding the American West’s essays challenge the romanticism of the West and the various mediums that have imagined, perpetuated and created our collective idea of the American West. Through the lens of New Western history, with a greater emphasis on the history of the environment, labor, class, gender and race in the West, the essayists compare and contrast the Western art movement of the late 19th and early 20th centuries that romanticized the West through the prism of the progressive movement of the first half of the 20th century. The essayists broaden the conversation to include the emerging mediums of film, photography and advertising to reach critical conclusions about how the Taos Society of Artists and Maynard Dixon perpetuated or challenged ethnocentric stereotypes and romantic visions of the West. In his essay titled “The Weary West,” historian Jimmy L. Bryan writes: “In their search for authenticity, and poetry, or for critical acclaim and financial security, western artists of the early twentieth century contributed to the reorientation and redefinition of decades-old mythologies.”

Traditional Western history buffs may dispute the New Western criticisms and analysis of artists’ intentions and interpretations of American Indians, women and the environment. Yet, if considered in the context and spirit of the exhibition, the personal analyses provided by the essayists in Branding the American West will create greater conversation and the realization that our collective knowledge of the West is as real as it is imagined.