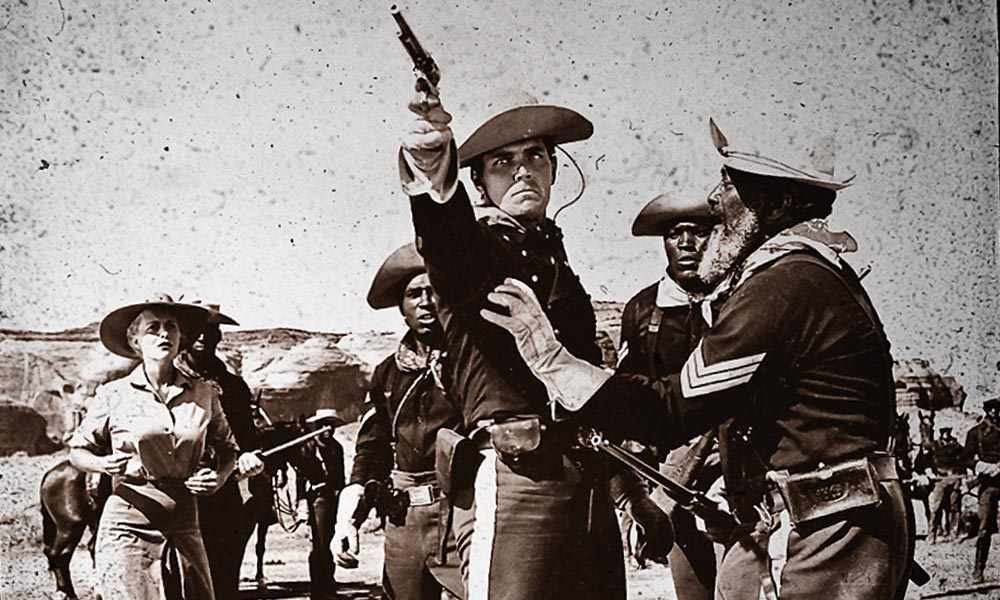 The Buffalo Soldier and his crucial role in the post-Civil War West went unacknowledged for so long in history annals that his story was rarely told on film.  Just shy of a century, from the 1866 formation of the black cavalry units, John Ford made the first and finest film on the subject, 1960’s Sergeant Rutledge.

A courtroom drama as well as a Western, the movie was a complex and incendiary story— the court-martial of black Sgt. Braxton Rutledge (played by Woody Strode) for the brutal rape and murder of a child, and the murder of her father, all of which were portrayed with flashbacks of the 9th Cavalry’s fight against the Apaches. Ford’s film dealt bravely with subjects few movies of the time dared.  When another soldier asked Rutledge why he ran if he was innocent, he replied, “Because I walked into something none of us can fight: white woman business.”

The leading lady of the film, Constance Towers, tells True West, “It was a project that John Ford wanted to make for a long time.  He was a great champion of the men who became the most heroic unit in the United States Cavalry.”

Legendary Gold Medal decathlon athlete Rafer Johnson made his film debut, between Olympics, as a corporal. He remembers, “It was an honor to work with John Ford in his very special part of the world, Monument Valley—one of the most picturesque parts of the United States.”

In some unexpected ways, the 1860s and the 1960s were not all that different. Towers recalls that, while filming in Four Corners, where Utah, Colorado, Arizona and New Mexico meet, “We had an unusual adventure.  We were on the Utah side.  But the black men, Rafer Johnson and the others, couldn’t stay where we stayed.  They had to stay in a neighboring town; they were taken in a private plane to a motel someplace that would accept black men.  It’s hard to believe that in 1960, it was still that difficult to blend the colors.”

Nevertheless, Johnson’s memories of making the film are positive. “It was a very pleasant experience. I was not very aware of the Buffalo Soldiers beforehand, but when we did the movie, I [learned] of the wonderful job they did,” he says. “They were segregated, but they were Americans, and they continued to do their job, to protect the people.”

A decade passed before the premiere of the next movie about the Buffalo Soldiers, and in 1970’s Soul Soldier, Johnson was promoted to the lead, even though his role was demoted to private. An earnest attempt to show the day-to-day life of the individual soldiers while fighting the Apaches, the movie featured a cast that included Cesar Romero, Barbara Hale and Isabel Sanford, and it was shot at Fort Davis in Texas, the actual headquarters for all four regiments. While the film showcases effective moments and some good performances, it is an unfocused story with a threadbare production. Johnson explains, “Soul Soldier was a university film.  They had to do a lot of fundraising to make it a feature.”

Between those films, the Buffalo Soldier made an occasional appearance on television. In The High Chaparral’s 1968 episode “The Buffalo Soldiers,” Sgt. Maj. Creason (Yaphet Kotto)  leads the 10th Cavalry as they bring law to unruly Tucson, Arizona, and, with the help of the Cannons, contend with racism. On The Big Valley episode in 1967 called “The Buffalo Man,” the Barkleys hire convict labor to pick their peach crop and discover that Damien (again Yaphet Kotto) was a member of an all-black platoon Jarrod Barkley (Richard Long) commanded during the war. Although identified as a Buffalo Soldier in the show, that designation did not come about until after the Civil War.

In 1979, a one-hour Western pilot Buffalo Soldiers featured troops protecting settlers from Apaches and Comanches.  Written and directed respectively by prolific Gunsmoke collaborators Jim Byrnes and Vincent McEveety, the episode had a high quality, but it was never seen again.

The best film on the subject since Sergeant Rutledge appeared in 1997, a TNT movie called Buffalo Soldiers. Starring and produced by Danny Glover, whose credits include Lonesome Dove, it tells a substantially true story of the pursuit of Apache leader Victorio. Dynamically directed by Charles Haid, the movie shows an army trapped between two enemies: the Apaches and white officers who would welcome failure by the black troops, to confirm prejudices. Filmed in Cochise Stronghold in Arizona’s Coronado National Forest, William Wages’ stunning camera work earned the American Society of Cinematographers’ Outstanding Achievement Award.  Although the ending feels contrived, an otherwise powerful script and supporting performances make this an exciting and thought-provoking movie.

Finally, bookended by the dedication of the Buffalo Soldier Monument in Fort Leavenworth, Kansas, Bill Armstrong’s modest, but informative, 1992 documentary The Buffalo Soldiers succinctly tells the soldiers’ story in 47 minutes.  It closes with a moving speech by Chairman of the Joint Chiefs of Staff Colin Powell.

Nothing yet on these legendary soldiers, though, has come close to topping Sergeant Rutledge. Ford certainly made movie magic, no matter the means necessary. Towers recalls one rather deplorable trick the director played: “He had [Strode’s wife] Luana tell him that their marriage was over; she was going back to Hawaii.  And poor Woody was beside himself; he stayed up all night, and Pappy got him to drink a little more than Woody would have normally consumed.  So by the next morning, when he went in to do his breakdown scene in the courtroom, which was fantastic, he was well prepared to break down.  But that was a typical John Ford trick, which I thought was terrible, but he did get a great performance out of him.”

(Kino Lorber, $29.95) In this 1974 Western, Scottish-born bank-robber Arch Deans (Gregory Peck) escapes with the loot, but when Billy Two Hats (Desi Arnaz Jr.), the half-breed who held the horses, is caught by the sheriff (Jack Warden), Deans goes back for him.  In this tough and involving tale, the tiny but excellent cast includes David Huddleston and Sian Barbara Allen, set in Israel’s spectacular Negev desert. This Blu-Ray edition includes a poignant interview with Director Ted Kotcheff.