by Phil Spangenberger | Jun 7, 2016 | Departments, Shooting from the Hip 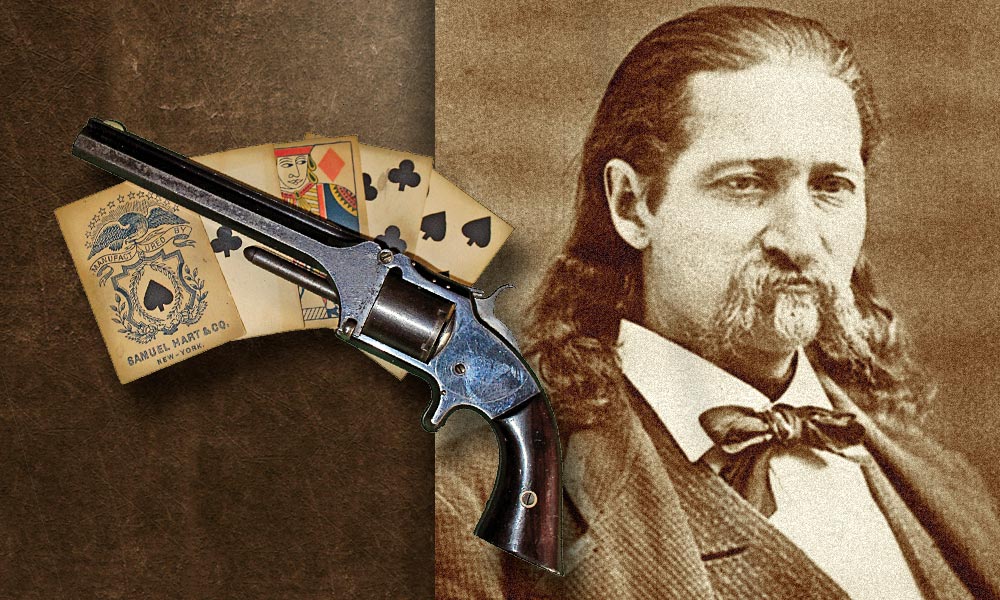 In 1866 Westerner wrote, “The new arm of the west, called a Smith-and-Weston [sic], is a pretty tool; as neat a machine for throwing slugs into a man’s flesh as an artist in murder could desire to see…” He of course was referring to Smith & Wesson’s (S&W) Model No. 2 revolver.

By 1860—following the success of its first metallic cartridge revolver, the 7-shot, .22 caliber Rimfire Model 1 (first- and second-issue models, manufactured from 1857-1860 and 1860-1868)—Smith & Wesson had realized the need for a larger and more powerful belt-sized revolver. Its answer proved to be timely as the first of the then-new .32 Long caliber, rimfire cartridge Model No. 2 revolvers, also known as the “Old Model Revolver” or the “Model No. 2 Army,” were sold in June of 1861—just two short months after the opening shots of the Civil War. Future president, Rutherford B. Hayes, favored the No. 2, and carried one during his service in the Union Army.

Although the new six-shooter was never adopted by the U.S. government, its relative power, coupled with its use of self-contained metallic cartridges, made it a popular choice among many Union soldiers who found it the ideal weapon for close-in fighting and purchased No. 2s with their own funds. Of the 77,155 No. 2 revolvers built between 1861 and 1872, about 30,000 were turned out during the War Between the States. In 1862, firearms distributor B. Kittredge & Co. of Cincinnati purchased 2,600 S&W .32s, and undoubtedly a number of them went west to other dealers. Among Kittredge’s order was an estimated 730 Model No. 2s sold to the border state of Kentucky, which in 1862 and 1863 issued these, along with 70,000 rounds of .32 Long rimfire cartridges, to the 7th Kentucky (federal) Cavalry.

Made as a tip-up revolver, much like the earlier model 1’s where the gun
hinges at the top strap, the No. 2 offered a larger belt-sized frame and 5- and 6-inch barrels (with a few turned out in 4-, 8- and 10-inch barrels), but it contained six .32 caliber cartridges rather than seven diminutive .22 rounds. The model 1’s octagonal barrel configuration remained, as did the square butt with rosewood grips. Standard finish on the iron-famed arm (earlier models were made with silver-plated brass frames) was either blued, nickel-plated or the scarce “half plate” finish, that consisted of a blued barrel and cylinder with a silver-plated frame.

Because the gun broke open at the top strap hinge to remove the non-fluted cylinder and facilitate loading and unloading, replacing empty cases with loaded cartridges was somewhat slow, but much faster than reloading an 1860s percussion revolver. The No. 2 S&W revolver was a frontier favorite during the mid-19th century by gun savvy Westerners like 1872 Kansas plainsman Henry Raymond, who recalled trading “two pistols [to] Joe for his Smith & Wesson No. 2, and $4.00 to boot.”  As an experienced frontiersman, he knew a good trade when he saw one.