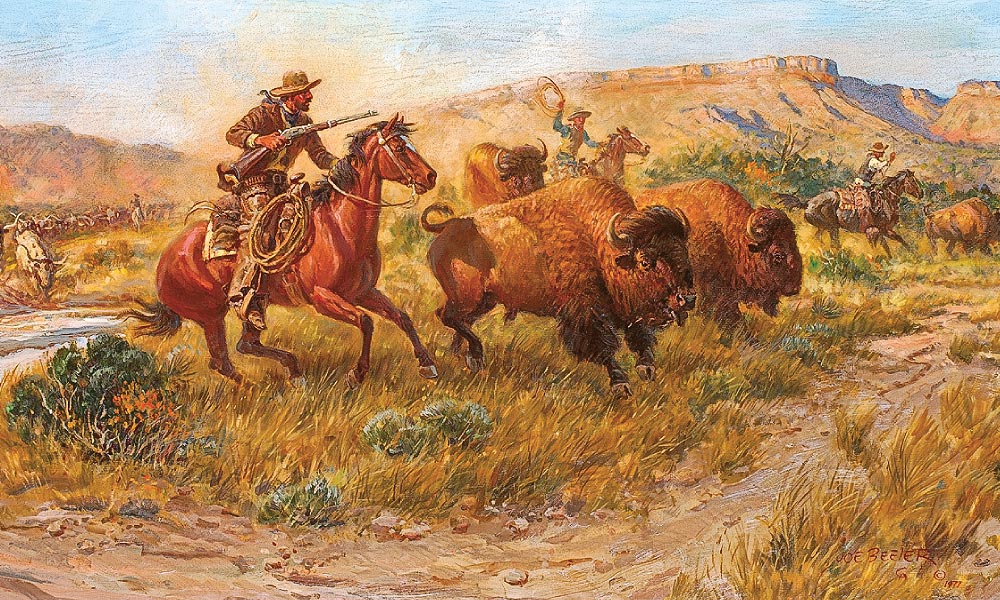 In the 1960s, Joe Beeler rode his horse daily on a six-mile trip to his mailbox from his home on Oklahoma’s Quapaw Reservation. He hunted. And he traded original artworks for goods, most recently for a down payment he needed to purchase his pickup truck.

He was also America’s most famous contemporary cowboy artist. Before he helped found the Cowboy Artists of America in 1965, his works were gaining critical and popular acclaim in solo exhibitions at the Gilcrease in Tulsa, Oklahoma, the National Cowboy Hall of Fame in Oklahoma City and at the Montana Historical Society’s museum. His illustrations appeared in University of Oklahoma Press tomes and on magazine pages. His painting sales exceeded $1,000, a far cry from the $35 he first earned, in 1958, for two illustrations published in Keith A. Murray’s The Modocs and Their War.

This year, his works inched closer to the $100,000 mark as well as set a new artist auction record. He still has many hundreds of thousands to go before he catches up to the millions paid out for works by today’s prestigious cowboy artists.

Collectors dished out the top bid, $75,000, for an oil portraying historical Indians, at Arizona’s Scottsdale Art Auction on April 2, and  $66,000, for a cowboy oil, at Altermann’s auction in Scottsdale that closed April 1.

Descending from Cherokee blood, Beeler grew up attending powwows and listening to his grandmother’s tales of traveling west on the Oregon Trail as a girl. In his artworks, he took great care to portray tribes accurately.

His painting of Charles Goodnight brings to mind a Beeler anecdote shared by biographer Don Hedgpeth: “Of all the wrongs and crimes committed against the pioneer cowmen by Indians, the one incident that bothered rancher Charlie Goodnight the most was when a band of Navajos raided him in New Mexico and killed and ate his saddle horse.”

The strength of Beeler’s works is found in how the artist epitomized the grit of the West. “I’ve always liked things with character,” he stated. “I don’t know how the dictionary defines it, but to me it is clothes, worn and wrinkled; a weather-beaten face; a good cow horse that would never win a halter class; a gunstock that shows the scars of long use and wear; and even the land and sky have character to me.”