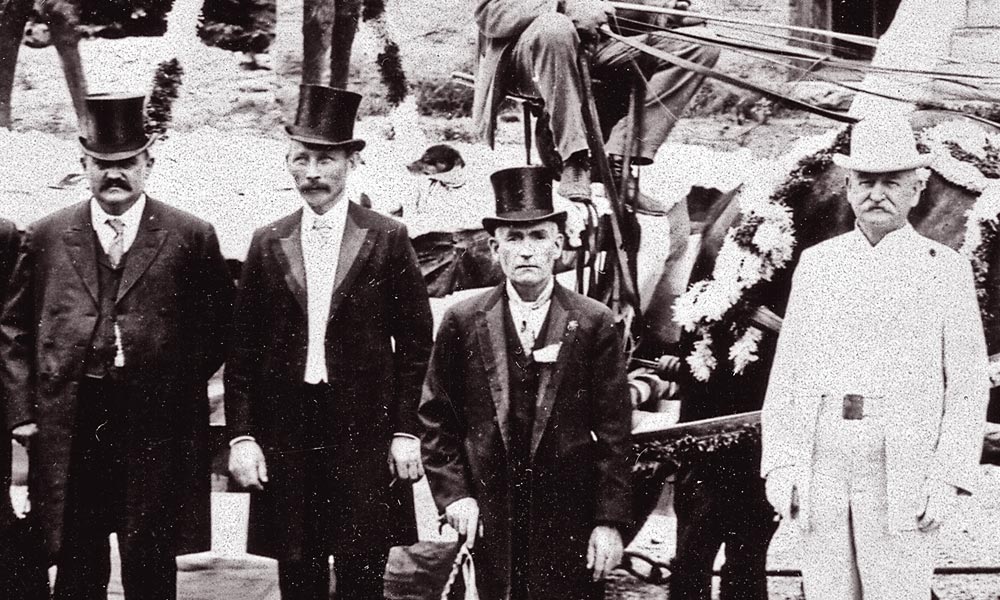 William “Doc” Rowan was a ham in the vein of P.T. Barnum, the circus king of the Gilded Age. For more than 20 years, Doc Rowan shone above Fourth of July crowds in Ouray, a Colorado town founded in 1876, dressed in his signature all-white garb—suit, shirt, shoes, socks, hat and even his whiskers. After parading down Main Street on a white horse, he delivered his annual recitation of the Gettysburg Address from the balcony of the Beaumont Hotel and then supervised the town’s fireworks display.

Born in 1849 in Charleston, prior to the formation of West Virginia, this remarkable physician hit the dirt running in 1880, when he arrived in Ouray, Colorado. To get there, he had traveled over rugged mountains, having just retired from his duties as a U.S. Army surgeon at Fort Garland, 235 miles to the east. He served two years at that critical outpost that had been founded in 1858 to protect settlers in the San Luis Valley.

The only physician in town during those early years, Rowan was known to be kind, considerate and reliable. But unlike lesser souls, this lifelong bachelor dove into Ouray society from the start. He not only opened up his Ouray Drug Company to administer remedies to his patients, but he also celebrated his showman persona by starting up the town’s thespian society. He gained further community camaraderie as the first “exalted leader” of the Ouray Elks Lodge and as a member of six other clubs, ranging from the Knights Templar to the Ancient Order of United Workmen.

The official journal of the Colorado Medical Society made note of the doctor several times in the late 19th and early 20th centuries. As recurring secretary of the Ouray County Medical Society, Rowan served on the State Board of Medical Examiners, first as president in 1901 and then as a member. In 1918, during WWI, he offered his skills as a member of the Volunteer Medical Service Corps. His public service extended to his roles as superintendent of schools, state congressman and mayor of Ouray.

Rowan’s robust character was best epitomized by his  adoption of a pet bear, Jim. Not unusual for the time, he walked Jim on a chain. When the bear became too big to control, the doctor killed and stuffed his pet. The taxidermied Jim can be seen, grinning through his teeth, in the medical exhibit at the Ouray County Historical Society Museum, the site of the St. Joseph’s Miners’ Hospital where Rowan once healed, as well as entertained, those less fortunate.

Dr. Jim Kornberg holds an MD and an ScD and is an environmental medicine physician and an engineer. He will discuss the “Trials and Tribulations” of Dr. Rowan at the Wright Opera House in Ouray, Colorado, on July 5, 2016, at 7:30 p.m. The theatre is the site where Dr. Rowan presented plays in the winter of 1881-1882. Findings by Ouray historians Doris H. Gregory and Dr. Donald Paulson supplemented his research.