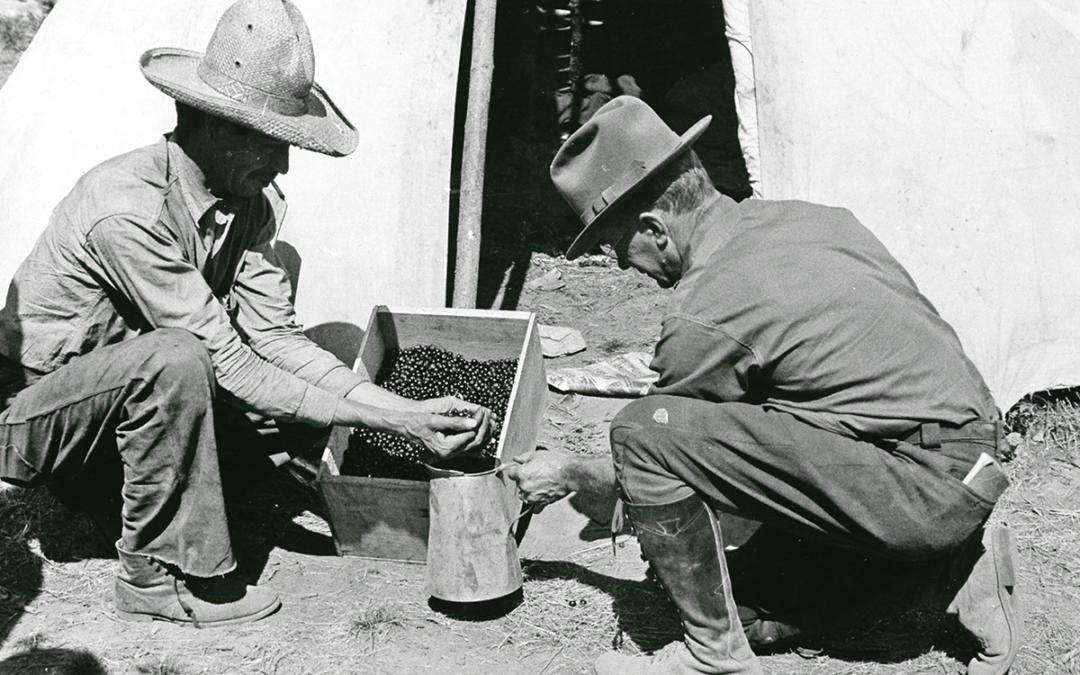 The native wild berries of Montana are a popular treat.

On June 3, 1805, William Clark wrote this in his journal as the Lewis and Clark Expedition traveled through Montana: “This morning early we passed over and formed a camp on the point formed by the junction of the two large rivers… the choke cherry grows here in abundance both in the river bottoms and in the steep ravenes [stet] along the river bluffs…saw the yellow and red courants [stet], not yet ripe; also the gooseberry which begins to ripen.”

As Montana pioneers arrived, they too found the berries Clark mentioned, but others as well, like the famous huckleberry and saskatoon aka serviceberry. The native peoples used various berries and their roots for medicinal teas for treating coughs and other ailments. They also used serviceberries as a food staple for centuries to make pemmican.

Clark’s companion, Meriwether Lewis wrote about the berries too. On August 16, 1805, he noted: “at 7 A.M. Capt. C. [Clark] set out after breakfast. Willow, service berry and currant bushes were the growth of the river bottoms. They gathered considerable quantities of service berries and caught some trout.”  Lewis also noted that wild huckleberries, which are tangy and tart, are small roundish berries that look like blueberries, grew in abundance, and the elk loved to eat them.

As Montana was settled in the 1800s, pioneers found many uses for the berries. At the 1890s Fergus County fairs a variety of items were offered for sale. Jams included gooseberry, currant, serviceberry and buffalo cherry, and wines made of currant, chokecherry, gooseberry and raspberry were offered.

Huckleberries were wildly popular and often made the newspaper. The Daily Inter Mountain in Butte noted in August 1899 that the huckleberry season was in full swing and reported, “Huckleberries having taken on the purple hue, many parties are preparing for a raid on the different patches in the mountain ranges hereabouts. The crop is said to be good this season. As there is nothing finer than a huckleberry pie, they are much sought after.” In November 1909, Luteys tempted its customers in The Anaconda Standard with a large ad that asked, “Why not make huckleberry pie for Sunday? Two pounds will make three fat, healthy pies or four nice size ones. Huckleberries are extra fresh today. Special, 2 lbs…25c.” Luteys had a similar ad for gooseberries, too. In October 1910, The Butte Miner ran an ad for the Montana Cash Grocery company which advertised, “Have you had a huckleberry pie this season? If not, you have missed a treat; they are delicious. The season is almost over. Pound…15c.”

The Butte Daily Post ran an ad that had a slightly different take on the dark fruit. On page eight of the November 5, 1910, edition, readers viewed an ad from the Fels-Naptha soap company that featured “Aunty Dredge,” who was their mascot at the time. The ad read, “Cross Mother—‘Those children are worrying the life out of me to bake them a huckleberry pie. But I daren’t do it. It nearly kills me trying to rub the stains out of their clothes, as well as the table linen.”

Aunty Drudge replied, “That’s ’cos you don’t wash the Fels-Naptha way. Let the children have all the pie that’s good for ’em. Fels-Naptha and cold water will remove the stains in a jiffy.”

Native fruit pies often appeared on menus all over Montana. The ladies of the congregational church in Billings held a fundraiser in 1897 at which they served a variety of items including quince and gooseberry pie. The Bon Ton restaurant in Helena, The Grand in Philipsburg, the Bristol Café in Great Falls and the Hotel Missoula all served gooseberry pie.

Snip the ends off the gooseberries. In a large bowl, combine the berries, sugar, flour and salt. Mix well.

Line a 9-inch pie pan with 1 crust and fill with the berry mixture. Dot the top with the butter and cover with second pie crust; seal. Make four or five slits in the top crust to allow the steam to escape.

Bake at 375°F for 45 minutes. If the crust starts to brown, cover it with aluminum foil. Cool completely before cutting.