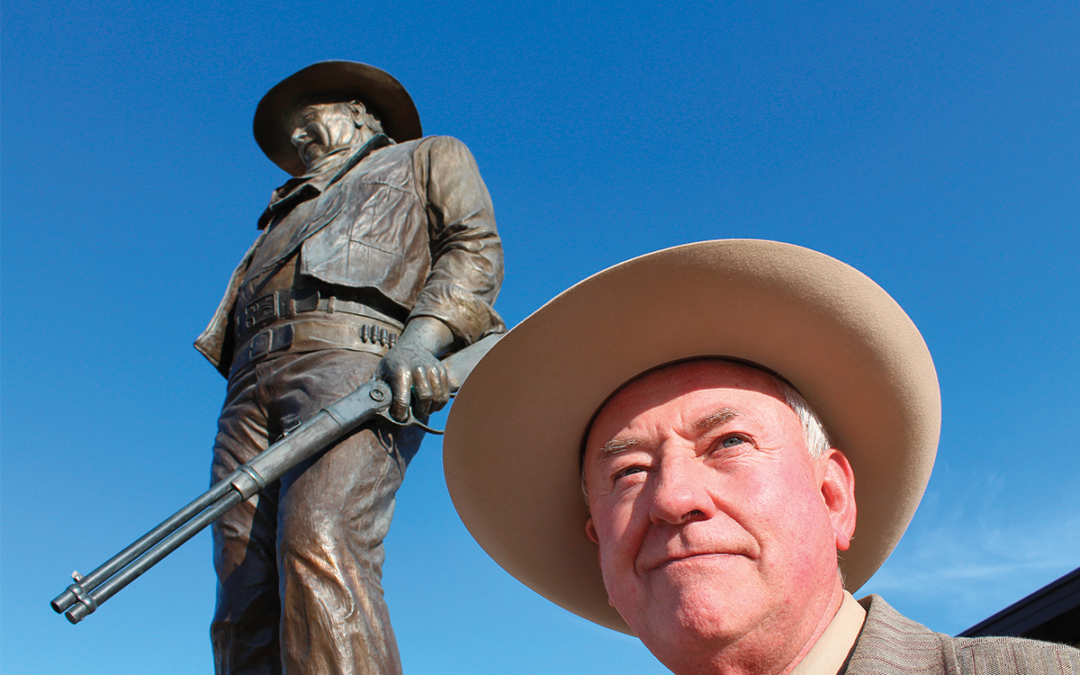 Director Brian Downes has made it his life’s work to build and fill the expanded John Wayne Birthplace Museum.

If you’ve visited the John Wayne Birthplace Museum in Winterset, Iowa, prior to June of 2022, you’ve only seen half of it. That’s because it’s just doubled in size. “It’s now 10,400 square feet,” explains Brian Downes, director of the museum. While little attention had been paid to the place beforehand, with the passing of the Western movie icon in 1979, “suddenly there was a great hunger to see the place where John Wayne was born. So, the old-timers in town who remembered the Morrison family pinpointed the house, and the birthplace organization bought it and opened it for tours 40 years ago this year.”

While Downes’ association with the museum is of comparatively recent vintage, his enthusiasm for the Duke goes back to his youth. In 1977, as an employee— but not a reporter —for the Chicago Tribune (where he would work for 35 years), “having a press card and the Tribune letterhead,” and a lot of Irish chutzpah, he requested an interview with Wayne. Incredibly, he says, “He invited me to his home and devoted the whole day to the visit,” even after he figured out it was the kid’s first interview. The meeting served them both well, as Downes became a pipeline from the Duke to the Tribune, running articles and letters from Wayne on topics from the Panama Canal (he thought Panama should own it) to mandatory retirement at age 65 (he was against it).

Until 2007, the centennial of Wayne’s birth, the museum consisted solely of his modest birth home. Downes, who in the summers ran a 40-person travelling Buffalo Bill’s Wild West show, offered the show to the museum. Not only did they accept, but soon after asked if he’d leave the Tribune to develop a new museum building.

He agreed. “We had all these promises of collections, but we needed a building.” About $4 million was raised, “I’d say 75 percent was from ordinary John Wayne fans from around the world.”

One of the first items, from a friend of Wayne’s, was the Duke’s own station wagon, with its roof raised six inches, so he could drive with his cowboy hat on. A private collector, Joe Zuckschwerdt, was another donor. “His collection represents close to 90 percent of the items on display.”

Among the Wayne memorabilia are original movie posters, contracts, wardrobe from Rio Lobo, Hatari, The Green Berets, uniforms from She Wore a Yellow Ribbon, Wayne’s saddle from The Cowboys, and, of course, a True Grit eyepatch. The museum even has the Irish jaunting car from The Quiet Man, which was bequeathed to the museum by Maureen O’Hara.

The most wanted items among John Wayne collectors are the personalized coffee mugs that he would give to each cast and crew member on every film. “We have ten on display, from The Alamo, True Grit, Comancheros, McQ,” Downes recalls. “We had our fundraising auction a couple weeks ago and we sold an extra Alamo mug for $7,600.”

At least in part because Iowa is an early voting state in presidential elections, many politicians have visited. “Ronald Reagan was here the day before the 1984 election. And the next day, he won 49 states, so it was lucky stop for him. Donald Trump was here twice; Jimmy Carter loved it.”

While the museum is not a part of John Wayne Enterprises, all the Wayne children have visited, and Aissa Wayne is on the board of directors. She also introduces the documentary shown in the museum’s theatre, which contains 24 seats from Grauman’s Chinese Theatre in Hollywood. One third of the new exhibit hall is devoted to The Alamo. The presentation is narrated by Barry Corbin, a good friend of the museum, and highlights of the display include a cannon from the film, and a scale model of the set.

Of course, Downes is always looking for more to add to the museum’s collection. “In Ridgway, Colorado, there’s the old jail cart from True Grit. I asked for it twice. At first there was talk, and then the chamber of commerce said absolutely no way: that’s all we’ve got!”