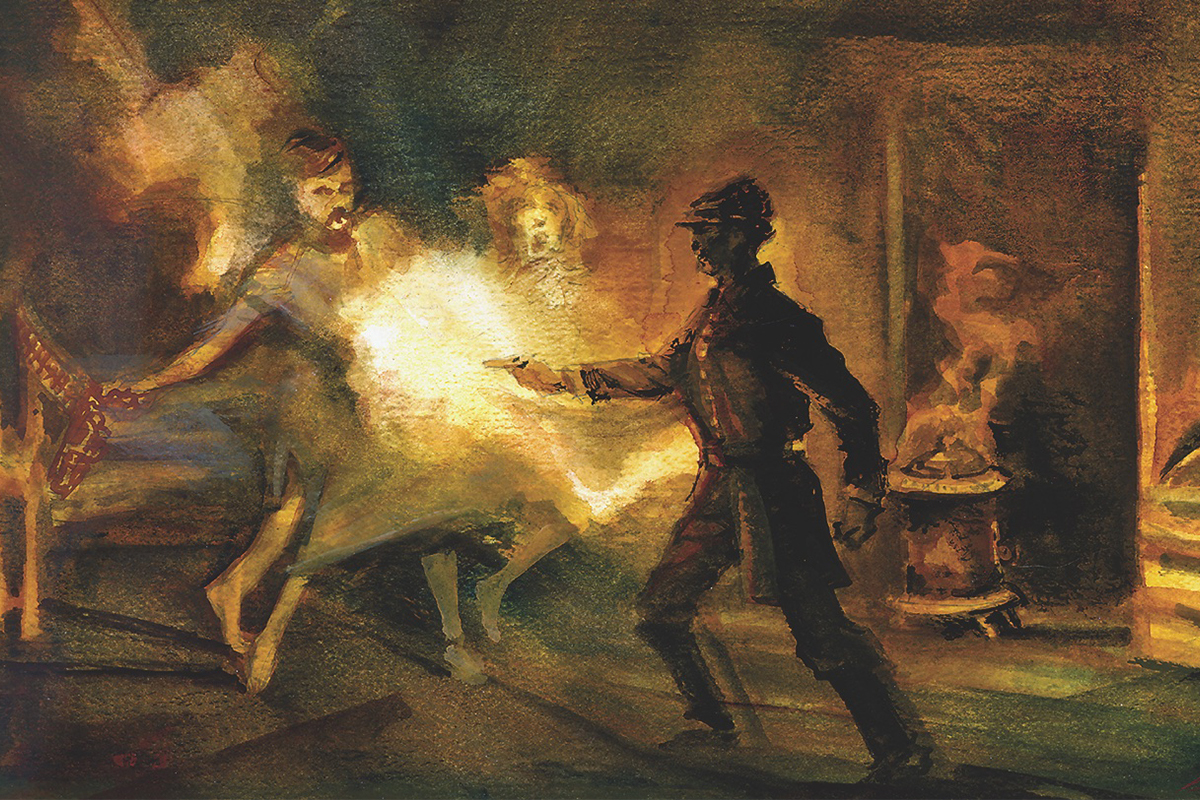 Three Different Versions of the Fight

Fresh off the killing fields, some 400 buffalo hunters are in Sweetwater, Texas, looking for whiskey and companionship. One of them—Bat Masterson—has found both. He has hooked up with a popular lass, Mollie Brennan, at the Lady Gay, a theatre and dance hall saloon.

Regrettably, Cpl. Melvin King (whose real name is Anthony Cook) also is smitten by Mollie, the dance hall girl. According to Masterson biographer Robert DeArment, “when he hears about Bat making time with his girl, he heads to the Gay on the double, carrying a full head of steam, a bellyful of rotgut whiskey and a loaded six-gun.”

At this point, the scant verified accounts begin to diverge dramatically. Here are the three versions of what happens next:

It is after hours, and Bat is in a room at the Lady Gay with Mollie.

Melvin pounds on the door. Thinking it is a friend wanting a nightcap, Bat unlocks the door.

Melvin lurches into the room with his pistol drawn. Seeing Mollie in bed, his worst suspicions are confirmed. He points his six-shooter at Bat and threatens to kill him. Shrieking at Melvin, Mollie jumps in front of Bat just as Melvin pulls the trigger. The bullet hits her in the stomach, angles through her body and strikes Bat in the pelvic region. As Mollie collapses, Bat staggers backwards and grabs his revolver. Bat fires, hitting Melvin in the heart and killing him instantly.

Melvin enters the Lady Gay at the height of the evening’s festivities. The saloon is jumping with soldiers, buffalo hunters, gamblers and soiled doves.

Several of Melvin’s friends pull their weaponry and attempt to get at Bat, who is lying seriously wounded on the dance floor.

Before they can get to Bat, gambler Ben Thompson leaps on a faro table with two drawn pistols and holds the troopers at bay until Bat can be moved to safer quarters.

A gunfight breaks out inside the Lady Gay between buffalo hunters and soldiers. Two of the soldiers are wounded and one killed (Melvin), while one of the dance hall girls (Mollie) is killed. In this version, no mention is made of Bat’s involvement or of his being shot. 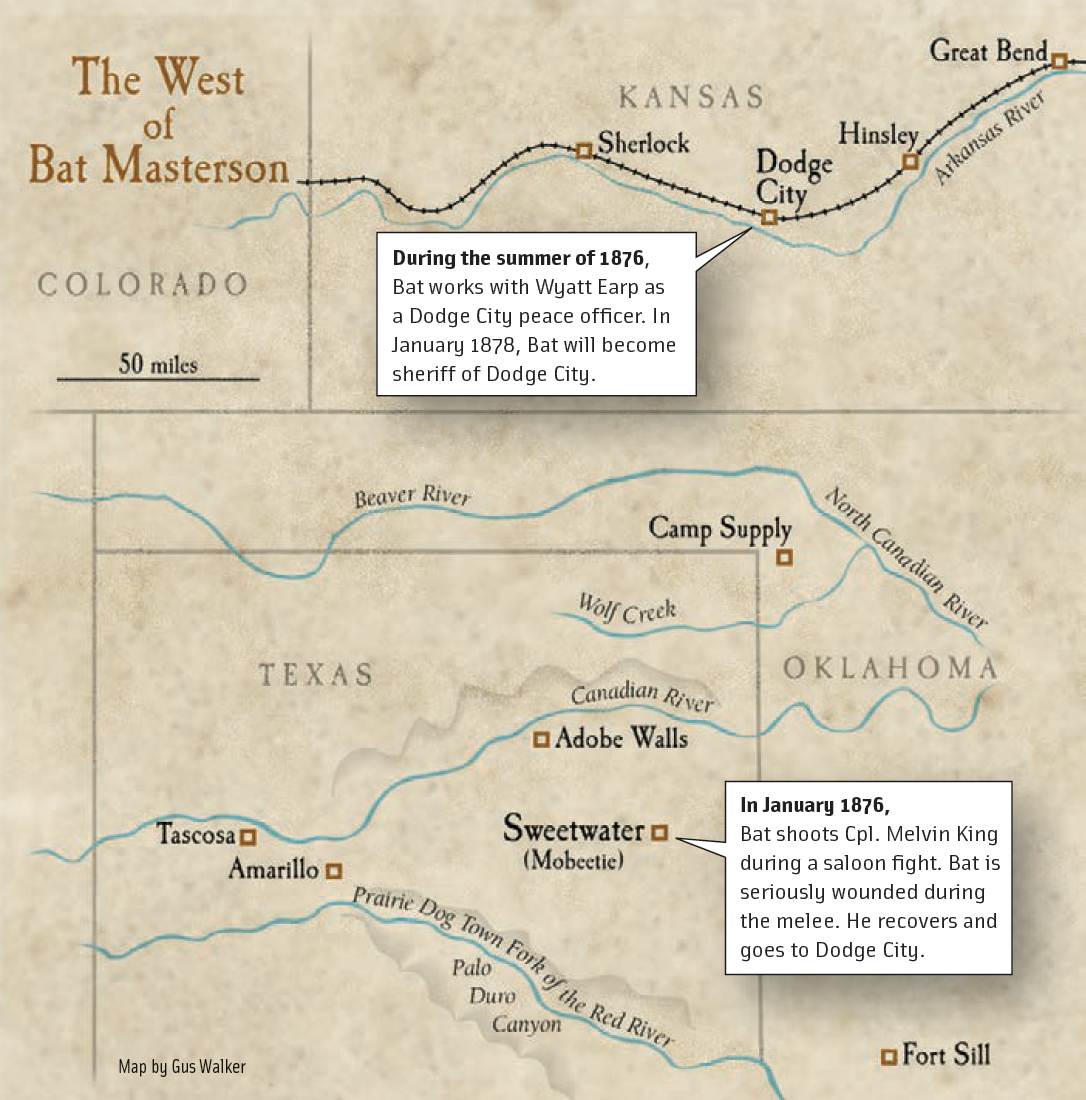 “[Ben Thompson] was absolutely without fear and his nerves were those of the finest steel. He shot at an adversary with the same precision and deliberation that he shot at a target.” —Bat Masterson, Human Life magazine, 1907

In Version One, the dance hall owner and several others heard the shots and rushed to the scene. A doctor was summoned, and he pronounced Bat Masterson’s and Mollie Brennan’s chances as nil. Mollie and Cpl. Melvin King soon died. (Although Version One has Melvin dying instantly, a newspaper account reports him being shot on Jan. 24 and dying on Jan. 25.) Bat was taken to the nearby military encampment, where an army physician successfully removed the bullet from Bat’s pelvis and nursed him back to health. Bat used a cane, according to biographer DeArment, only until his wound healed. He may have limped a little, but didn’t use a cane later.

Version One comes from Bat’s younger brother, Thomas Masterson, Jr., who was 17 at the time of the incident. Interviewed in 1937, Tom claimed he heard the story from Bat when his older brother came home a few weeks after the incident.

Version Two comes from Wyatt Earp, who told his version of events to Stuart Lake (Frontier Marshal) in 1929. Earp didn’t claim to be there.

It’s interesting to note that Ben Thompson knew Mollie very well, as she had been his brother Billy’s girlfriend in Kansas. Bat Masterson biographer DeArment wrote that if Thompson’s role in the fight is true, it must have been the genesis of the friendship between Bat and the gambler. The two crossed paths again in Kansas, as did Wyatt Earp, and Bat rated Thompson the best of all the gunfighters (see quote at left).

Version Three is from the memoirs of George Curry, published in 1958. Curry, 14 in 1876, lived in Sweetwater at the time of the shooting.

Recommended: Bat Masterson: The Man and the Legend by Robert K. DeArment, published by University of Oklahoma Press.