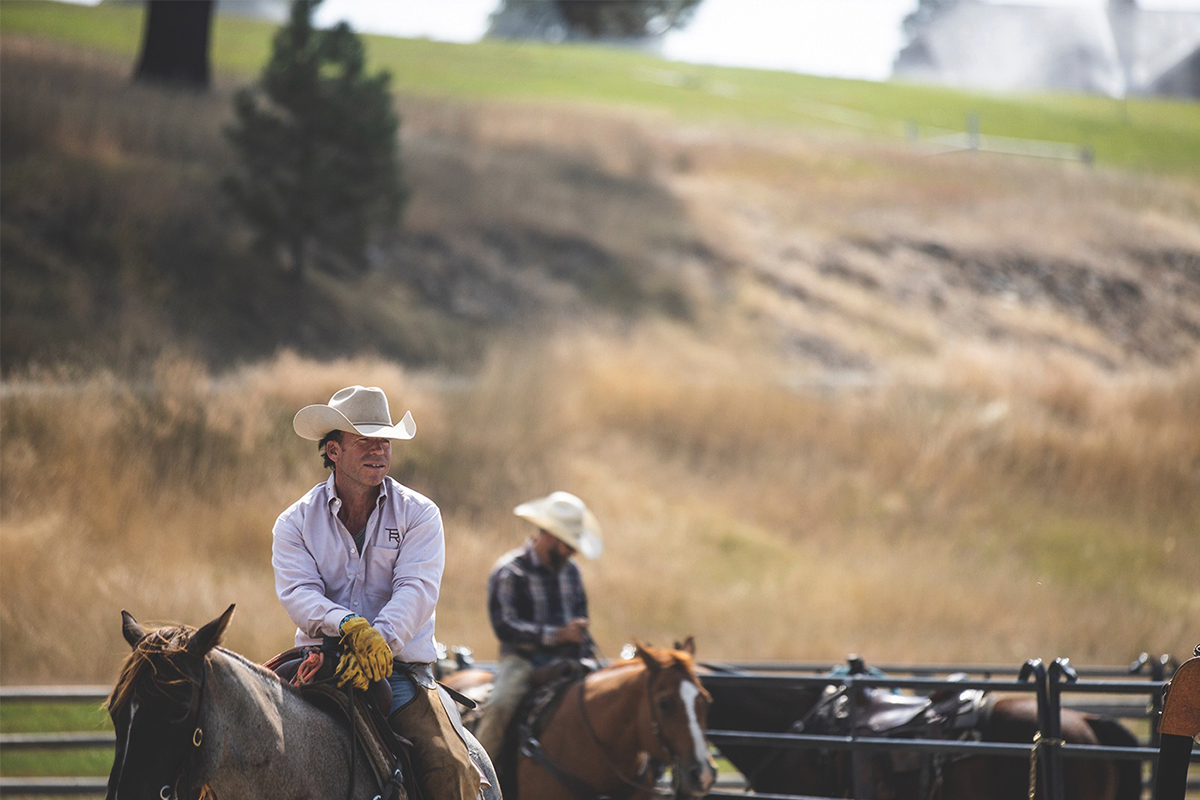 Writer-director-producer Taylor Sheridan celebrates his roots with his new series filmed in Texas.

When writer, producer and director Taylor Sheridan spoke to True West in August, he was less than a week from shooting the Yellowstone prequel, Y:1883, which will stream on Paramount+ beginning December 19, 2021. It will be the Texan’s first historical Western, but he previously wrote two excellent contemporary Westerns, Wind River and Hell or High Water, the story of two brothers who pay off their late mother’s ranch by robbing branches of the bank that holds the note.

“I wrote that at a time when all my friends I grew up with—cowboys, ranchers—were losing their jobs and their land. It was the worst drought we’d ever seen in West Texas. There was nowhere to graze. Everybody’s calling in the credit lines. It was a death knell for a lot of families that had ranched for a hundred or more years, and no one knew about it, so I decided to make a movie about it; a love poem to Texas.”

It wasn’t easy. “I had a lot of trouble convincing anyone to let me make anything Western, until Yellowstone proved that there was a real appetite for the genre. Then I devised a mechanism to make a legitimate period Western about something that no one’s really successfully done, a ‘wagons west’ story that’s really been impactful.

“If you study the pioneer movement west, you understand that there were plenty of other villains along the way, but the journey itself was a villain. The vast majority of people who went west [were] from eastern urban areas, Europe, Asia, Scotland, Ireland—from places where they were desperate, and this seemed like the best option to change the course of their lives. So many did not speak the language, had never ridden a horse, had never seen a rattlesnake, didn’t know how to swim. And now they’re gonna find themselves crossing between 25 and 50 rivers and creeks. They put themselves in situations that are almost impossible for someone who’s prepared for it. That’s the thing I’ve never seen in other films, the misery of the journey. Oh, and by the way, there’s bandits everywhere because there’s no law.”

Sheridan was thinking about the world of Y:1883 long before Yellowstone premiered. “As a storyteller building a world, I need to know the origins: how it started, and how it ends, or I don’t know what I’m writing toward. So, when I came up with the idea for Yellowstone, I plotted out from when the family came to the United States. When did they come to Bozeman? How did they become what they are?”

The fictional family who create Yellowstone, the largest private ranch in America, are James and Margaret Dutton, great-great grandparents of Kevin Costner’s character, John Dutton. As to their origins, Sheridan says, “You’re gonna have to watch it. But I will say this: they arrive in Texas and follow the Chisholm Trail north until they go west. And then they go north again. Or do they?” They’ll be portrayed by Tim McGraw and Faith Hill. Though the real-life duo is best known as country music superstars, they both have acting experience. “Tim’s performance in Friday Night Lights was spectacular. I think musicians make this transition easily: they understand applying emotion to dialogue, because they do it for a living; they just do it to a rhythm.”

Adding cowboy gravitas to the proceedings, the Duttons are guided by Shea Brennan, played by Sam Elliott. Sheridan is a big fan, he said, “going back to Conagher, Tombstone, The Sacketts. But my favorite Sam Elliot movie is Roadhouse,” not a Western, but the story of bar bouncer Patrick Swayze. “When I bring it up, Sam shakes his head and goes, ‘Oh, God, Taylor,’ because I quote [his character] all the time.”

Much of Y:1883 will be filmed at Sheridan’s 1,000-acre Bosque Ranch Complex in Weatherford, Texas. “Bosque is Spanish for river-bottom forest. I was raised in Bosque County, Texas, so that’s where the name comes from, even though Bosque Ranch is on the Brazos River in Parker County.” Much more than a filming location, it boasts a main arena, multiple barns, a practice pen, restaurant, bar and offices, with plans to include not only regular cutting events, but large rodeos and concerts. Sheridan’s goal with Bosque Ranch is to revitalize and revolutionize the performance horse industry. Pointing to the success of NASCAR and professional bull riders, Sheridan says confidently, “The prize money will be immense. The music will be loud. The excitement will be unmatched. In short, a niche industry will become a spectator sport. And I will show the world how to do it.”

Westerns have long been a part of Sheridan’s life. “As an eight-, nine-, ten-year-old boy, I watched all the early John Wayne and Clint Eastwood movies. Then [around 1990] you have sort of a triple whammy: Dances with Wolves had a tremendous impact on cinema when it came out. Silverado, Tombstone…Lonesome Dove’s a miniseries, but I put it in the same category. I think Unforgiven is the best Western ever made. It did something that I try to do, which is turn a genre on its ear, and play with our expectations of what that genre is. I thought it was masterful.”

Unlike Yellowstone (left), which Sheridan co-created with John Linson, Y:1883 is his alone. “I’ve already written the whole thing.” He’s also directing. How many seasons are we likely to see? “Well, Y:1883 only goes one season—that’s it. Then we may jump ahead to 1922, to 1935. I haven’t figured that out yet.”

But no matter how far forward in time he moves the Duttons, it’s pretty likely we’ll be seeing more Westerns from Taylor Sheridan. “It’s all I’ve ever wanted to do.”

(MVD Visual, Blu-Ray $24.95; DVD $14.95) Nearly a quarter-century after his final Republic feature, Roy Rogers (near right) starred in his very last movie. It was the best performance of his career. If he were younger, it could have been his Stagecoach. Directed by Emmy-winner Marvin Chomsky, Mackintosh and T.J. was the passion project of Tim Penland, a stunning film that belies its $800,000 budget. 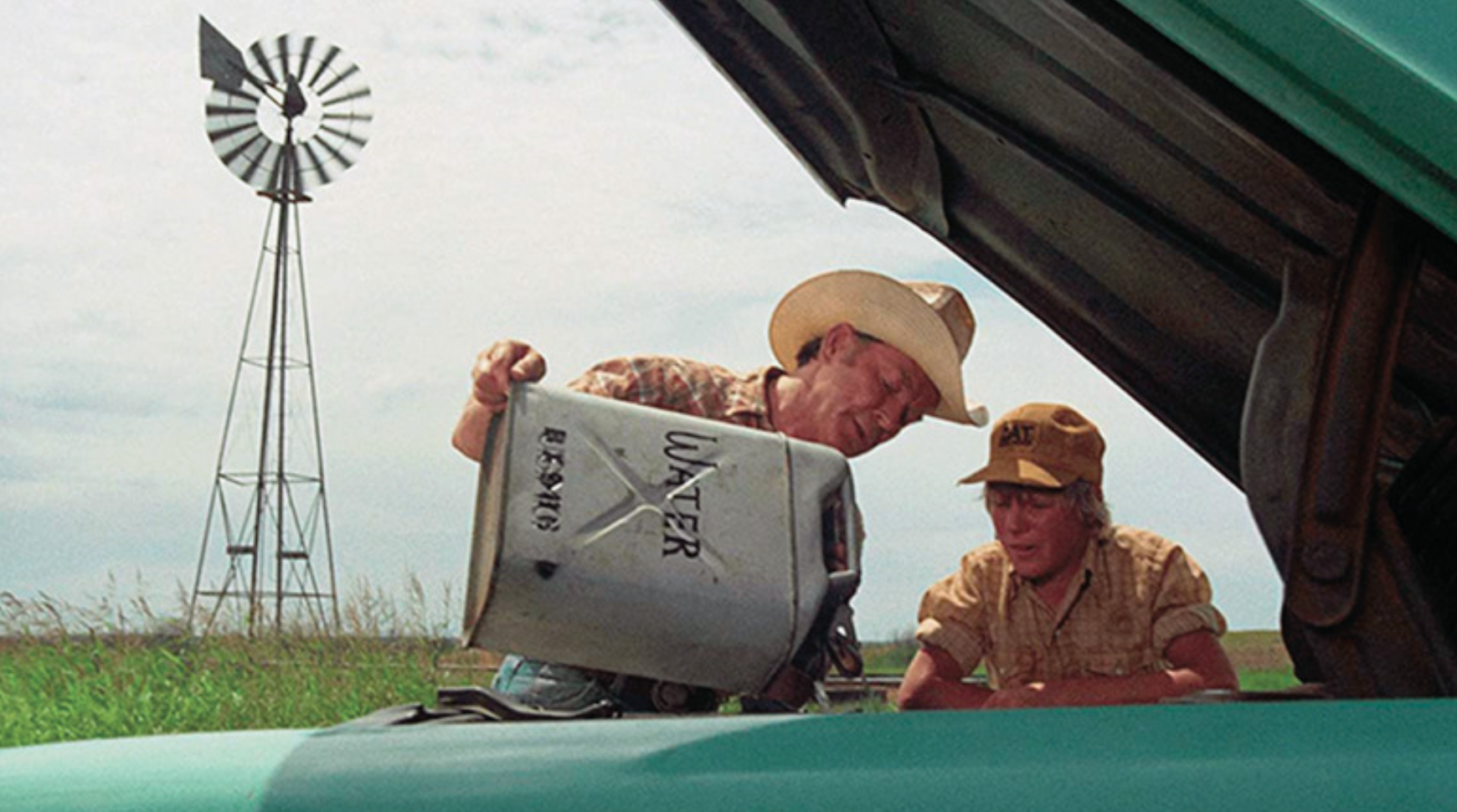 Roy, then 64, plays Mackintosh, a one-time top-hand, now surviving on day-to-day ranch-work wherever his disintegrating pick-up takes him. He rescues teen T.J. (Clay O’Brien, above, far right) from a shoplifting rap, and they throw in together. Working at the legendary Four 6s Ranch, Mackintosh shows T.J. how to be a man, a lesson O’Brien first learned from John Wayne in The Cowboys, and could now teach anyone: he’s in the Pro Rodeo Hall of Fame. It’s a naturalistic, unsentimental story about the men who tend cattle and horses.

Roy’s daughter Cheryl Rogers Barnett recalls, “He’d gotten so disenchanted with Hollywood that he told [his manager] Art Rush not to bring him anything. But that script came, and he just fell in love with it.

“I’d never really considered Dad an actor,” confides Cheryl. “He played himself. He was always saying, ‘Old Roy wouldn’t say it this way.’ In Mackintosh he’s not playing Roy Rogers; he’s playing that wonderful character Paul Savage wrote.” It’s a contemporary tale in which ethical Mackintosh must contend not only with broncs, but with wife-beaters and peeping-toms.

Sadly, the film was barely seen: Penland turned down $2 million from Columbia, and couldn’t raise the money to distribute it outside of Texas. Since 2003, when he picked up a poor dub the final week of Roy’s Apple Valley Museum, Rogers aficionado Steve Latshaw has wanted to share Mackintosh, and now he’s done so, tracking the original negative to Technicolor labs, and helping to create a stunning 4K restoration.