Pillars of the Plains 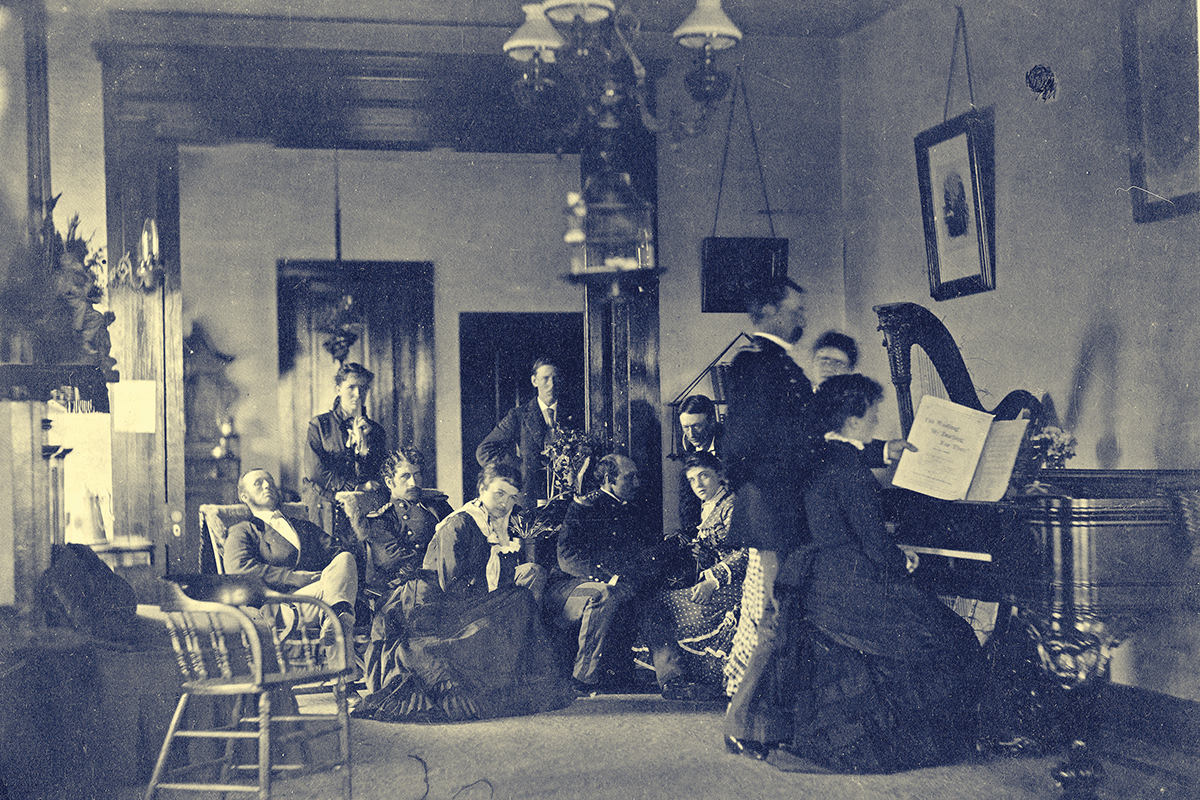 Two of the most recognized women in the Old West are Sacajawea and Elizabeth Custer and both of them have stories tied to the history of western North Dakota. Their stories are just two of many connected to this Great Plains landscape.

Captain William Clark and Captain Meriwether Lewis with their Corps of Discovery, started building a tri-sided fort near the Missouri River on November 2, 1804, and they would remain there through the winter. Their post, called Fort Mandan, about a dozen miles from present-day Washburn, North Dakota, was downstream from villages occupied by Mandan and Hidatsa Indians. At Mandan, Lewis wrote in his journal on February 11, 1805, “one of the wives of Charbono was delivered of a fine boy.” This wife of Toussaint Charbonneau, the interpreter Lewis and Clark had hired to accompany them upriver later in the spring, was a woman of many names, known as Sacajawea (Sacagawea)—or in North Dakota, Sakakawea. She was Lemhi Shoshone, but had been abducted by Hidatsa raiders near the Three Forks of the Missouri and was later traded to Charbonneau, a French-Canadian trapper.

During that winter of 1804-05, Lewis and Clark and their men stayed close to Fort Mandan, though they visited regularly with the Mandans, seeking information about what they would find upriver when they departed in the spring. They knew that Charbonneau spoke a variety of languages and would be helpful as they set off. Sacajawea was often with him in the quarters at Fort Mandan and no doubt Lewis and Clark realized that her knowledge of the territory they would be traveling through would be useful to their mission. Her fluency in Shoshone and her ability to communicate with Charbonneau in Hidatsa were reason enough to take the young woman with them in the spring to travel the Missouri River in two pirogues and on foot.

The location of Fort Mandan is not known for certain—it is most likely now under the waters of the Missouri River—but visitors can step into the areas where the Mandans and other Missouri River tribes lived. The Knife River Villages, now a national historic site, are an hour northwest of Bismarck. One of the Knife River locations is Awatixa Village, also called Sakakawea Village. It had as many as 60 earth lodges, and the depressions of the sites of Mandan lodges are still visible.

Gain an overview of North Dakota’s history at the North Dakota Heritage Center in Bismarck and visit Fort Abraham Lincoln, which overlooks On-a-Slant Village, a Mandan campsite that includes reconstructed earth lodges. The Mandans occupied the site on the flats along the Missouri River from about 1575 to 1781. Fort McKeen was built nearby in 1872 and the following year a cavalry post was constructed and the combined installations were renamed Fort Abraham Lincoln. When Lt. Col. George Armstrong Custer arrived as the commander of the new post, he brought his wife Elizabeth (Libbie). This post quickly became one of the largest and most important on the Northern Plains.

Custer and the 7th Cavalry drilled on the parade ground while Libbie entertained in the commander’s house. She had family around including sister-in-law Margaret Calhoun. In addition to George, his two brothers Tom and Boston Custer, brother-in-law James Calhoun, and nephew “Autie” Reed all served in the Army and were stationed at Fort Lincoln.

The 7th Cavalry marched away from the fort on May 17, 1876. The departure was impressive as a dozen companies of troops, Indian scouts and 150 wagons carrying equipment and supplies strung out in a column that was two miles long. With soldiers, civilians, teamsters, and the Indian scouts, the group numbered about 1,200 men and 1,700 animals, including a herd of cattle and extra horses and mules. With other women left behind at the fort, Elizabeth Custer and Margaret Calhoun watched the column until it disappeared into the distance.

The fort would have been very quiet after the cavalry departure. The women visited each other and went about their daily duties until the devastating news reached them in late June that Custer’s command had fallen in the battle at the Little Bighorn in Montana Territory.

Libbie Custer, her heart no doubt breaking after learning the news of the fight, picked up her shawl and accompanied Capt. William McCaskey of the 20th Infantry, one of the men who had informed her of Custer’s death, to visit the other women at the fort and tell them of their own husbands’ fates. Once the sad duty had been carried out, Libbie Custer returned to her own home, where they had held family gatherings and other social events. She packed her things and departed the fort, traveling to her family’s home in Monroe, Michigan. She later wrote that “a wounded thing must hide.” But Libbie Custer would pick herself up and spend the rest of her life writing books that honored her husband’s legacy.

The area near the confluence of the Yellowstone and Missouri rivers became the site of Fort Union, the most important fur trading site on the Upper Missouri during the 19th century. This American Fur Company post became a key location for trading with members of several Indian tribes including the Assiniboine, Blackfeet, Plains Creek, Crow, Hidatsa, Mandan and Ojibwa (Chippewa). Indian women were at the post with their families to engage in trade; some were painted by George Catlin after his travel through the area in 1832. Arguably the most important woman associated with Fort Union was Natawista, the daughter of Two Suns, a leader in the Blood tribe of the Blackfoot Confederacy. Born in about 1825, she traveled with her father to the Fort Union Trading post when she was about 15 years old. There she married Alexander Culbertson, the chief trader at Fort Union.

Because trade was so important to the tribes, it was not uncommon for a headman, or chief, to forge relations with fur traders through the arranged marriages of their daughters.

Natawista would serve an important role at Fort Union, bearing five children and assisting her husband with trading duties. She served as a translator and a hostess, gaining some credibility as a diplomat who bridged cultures.

As Indians, Sacajawea and Natawista had deep connections to the Western lands and the lifestyles of their people, which required them to adapt to ever-changing conditions.

Elizabeth Bacon had fallen in love with George Armstrong Custer, and following their marriage, she willingly traveled with him to his assignment posts in the West.

Medora von Hoffman, the daughter of a wealthy New York banker, likely never expected she would live in the Wild West. When traveling in Europe she met and married a wealthy French nobleman, the Marquis de Morès. He came with her to America and began learning about the American West. He saw the place as a land of opportunity and came to western North Dakota in April 1883. The marquis selected an area where the Northern Pacific Railroad crossed the Little Missouri River, bought nearly 9,000 acres, and, near the original town of Little Missouri, built a new town on the east bank of the river—naming it Medora, for his wife.

The area had everything the Marquis de Morès wanted and needed for his enterprise: abundant water, grass and shelter for cattle, direct shipping on the railroad to markets in the East, and ice on the river to use in a packing plant. Besides being European and wealthy, the marquis was an entrepreneur. He had convinced his father-in-law to provide the financial backing necessary to start his own company, the Northern Pacific Refrigerator Car Company. The business raised cattle, butchered them at the packing plant, and then shipped the meat to markets using refrigerated railroad cars to keep it fresh in transit.

The operation lasted just three years, failing due to competition and partially because eastern consumers did not like the taste of the range-fed beef. But the marquis had not pinned all his hopes and dreams on one business. In addition to ranching and feeding cattle, he raised sheep and horses, had a freighting company and stage coach line that linked Medora with Deadwood, South Dakota, and he established and operated ice houses along the route of the Northern Pacific between Helena, Montana, and Duluth, Minnesota, using his refrigerated railroad cars to ship not only beef, but also other goods, including salmon, from the West Coast to the East Coast.

Medora managed the couple’s 26-room summer home, the Chateau de Morès, built on a bluff overlooking the town that bore her name. This home is now a North Dakota State Historic Site.

Another early resident of the area was Theodore Roosevelt, who came in 1883 to hunt buffalo. Before leaving the region he bought a share of Chimney Butte Ranch, locally known as the Maltese Cross. Roosevelt left North Dakota to return to New York and a political career, but was devastated by the deaths of his mother and wife, within hours of each other. His baby daughter survived, but after the deaths of the women Roosevelt returned to North Dakota where he expanded his ranch holdings. Cattlemen in the region brought more and more head of livestock to the area. And then disaster struck with a severe winter in 1886 that killed hundreds of thousands of animals. The Great Die-Up devastated many ranchers’ operations, including Roosevelt’s.

Those experiences in the West were profound for Roosevelt, and when he became President of the United States, he implemented conservation measures that preserved lands across the nation. The land he explored and the badlands where he hunted, are now part of the 70,000-acre Theodore Roosevelt National Park, one of the primary attractions in the Medora area.

During the summer the Medora Musical is performed in an outdoor amphitheater, sharing stories related to Roosevelt from his time in the region to the charge up San Juan Hill with his Rough Riders during the Spanish American War. While in the area, visit the Maltese Cross Cabin and the North Dakota Cowboy Hall of Fame.

Candy Moulton is a regular True West road warrior who makes her home near Encampment, Wyoming. She invites everyone to her hometown museum June 12 and 13 for “True West”—a history symposium featuring Bob Boze Bell, Johnny D. Boggs and other TW writers.