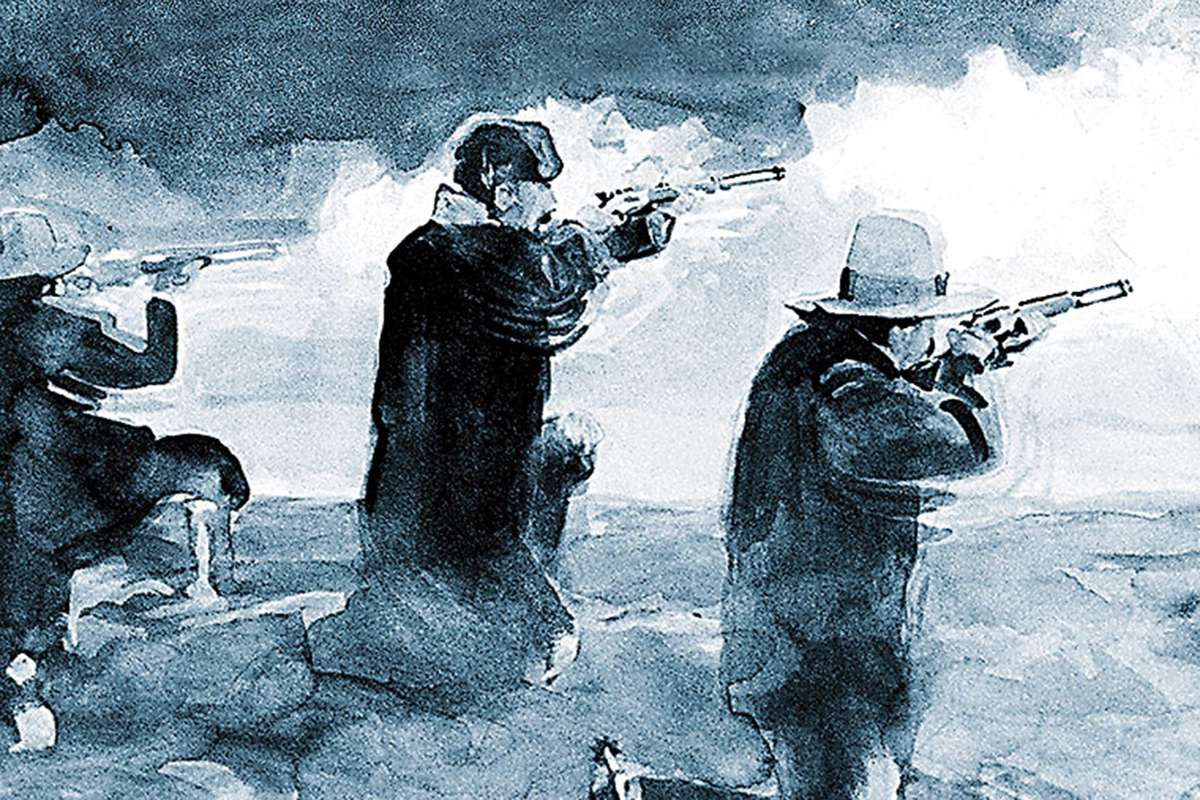 Riding at midnight through deep snow, Sheriff-elect Pat Garrett leads a 13-man posse eastward out of Fort Sumner, New Mexico. After questioning several people in Fort Sumner and ascertaining the Kid’s dress (“especially his hat,” which is said to be a Mexican sugarloaf with a green hatband), Garrett decides he won’t take any chances. When the Kid makes his appearance, Garrett will kill him and hope the rest surrender.

After a 10-mile ride to the Brazil-Wilcox Ranch, where Billy the Kid and his compadres were last seen, Garrett picks up their trail clearly in the snow. “Following this trail a short distance,” he recounts, “I [am] convinced that they had made for Stinking Springs.”

Garrett sends a message to Stewart of their plan of attack: “Stealthily enter the house, cover them with our guns and hold them until daylight.”

The men shiver and attempt to stay warm until daylight (about a four-hour wait). It’s so cold, posse member Charlie Rudolph gets frostbite on his feet. As the posse members wait, they hear snoring from inside the rock house.  The hours drag by and the temperature seems to get colder as the men look for any sign of movement from the “inmates.”

The lanky sheriff commands a direct view of the doorway. While waiting for the Kid’s sombrero to pop into view, Garrett orders his men: “When I bring up my gun, [you] raise and fire.”

As the weak rays of sunlight begin streaking the horizon, the posse hears movement in the house. Shortly, a man appears in the doorway with a nose bag (feed bag for the horses). The man’s head is down, but Garrett sees a Mexican hat with a green band and brings his Winchester rifle to his shoulder. Seven bullets rip through the pale dawn light.

Garrett yells for him to come out with his hands up. As Charlie Bowdre staggers to the door, the Kid catches hold of his belt, draws his revolver around in front of Bowdre and says, “They have murdered you, Charlie, but you can get revenge. Kill some of the sons-of-bitches before you die.”

Bowdre comes out with his hands barely up. He stumbles toward the posse until he recognizes Garrett, and he goes straight at him. Motioning with his hands at the house and strangling in his own blood, he gasps, “I wish… I wish… I wish….” Then with a whisper, “I’m dying,” he falls into Garrett’s arms. The lawman gently lays him on his blankets.

As the morning light brightens, Garrett notices the rope ties on one of the outside horses is moving. He quickly surmises that the outlaws are trying to bring the horses inside in order to make a break. Garrett shoots the horse dead, and it drops in the doorway. To stop any more attempts, Garrett takes careful aim and shoots the ropes of the other horses. The animals “walk away” and are captured by Stewart’s men.

“Can’t do it, Pat,” the Kid replies, “business is too confining. No time to run around.”

Garrett decides to eat breakfast, so he goes with half the men back three miles to the Brazil-Wilcox Ranch head-quarters.

Posse members Tom Emory and Jim East are appalled at Mason’s treachery and aim their Winchesters at Garrett’s friend. One of them says, “If you fire a shot, we’ll kill you.” Mason backs off.

The next day is Christmas Eve and by noon, the lawmen and their prisoners reach Fort Sumner where they headquarter at Beaver Smith’s Saloon and eat lunch while the prisoners are shackled together. In the afternoon Garrett leads his men and a wagon full of prisoners towards Las Vegas, in deep snow. They have Christmas dinner at Padre Polaco’s store in Puerto de Luna, and then after the wagon axle breaks (see at left) the posse travels all night and arrives in Las Vegas by late morning on December 26.

As Garrett gets ready to leave for Santa Fe on the train, a mob meets them at the station. They want Dirty Dave Rudabaugh. The standoff lasts for a half hour.

A mob met Garrett and his posse and prisoners at the train station. As Garrett successfully stood off the mob, Billy casually talked to a reporter for the Las Vegas Gazette.

“We saw him again at the depot when the crowd presented a really warlike  appearance. Standing by the car, out of one of the windows of which he was leaning, he talked freely with us of the whole affair:

“‘I don’t blame you for writing of me as you have. You had to believe other stories; but then I don’t know as any one would believe anything good of me anyway,’ he said. ‘I wasn’t the leader of any gang—I was for Billy all the time. About that Portales business, I owned the rancho with Charlie Bowdre. I took it up and was holding it because I wanted to keep it for a station. But I found that there were certain men who wouldn’t let me live in the country and so I was going to leave. We had all our grub in the house when they took us in, and we were going to a place about six miles away in the morning to cook it and then “light” out. I haven’t stolen any stock. I made my living by gambling but that was the only way I could live. They wouldn’t let me settle down; if they had I wouldn’t be here today,’ and he held up his right arm on which was the bracelet. 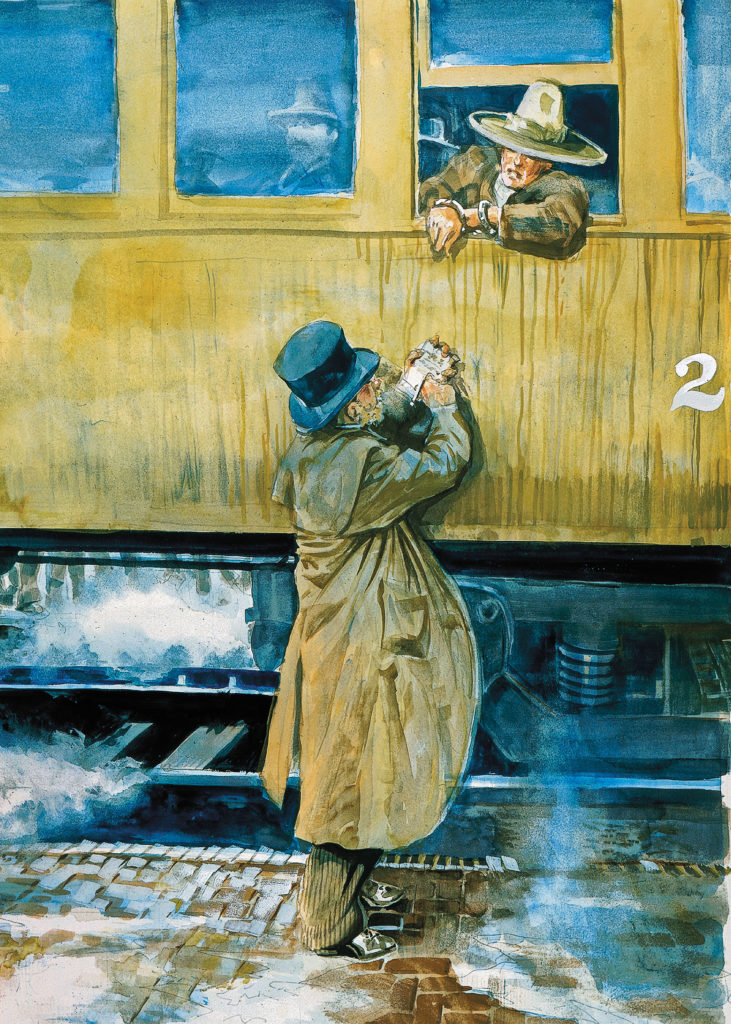 “‘Chisum got me into all this trouble and then wouldn’t help me out. If it hadn’t been for the dead horse in the doorway [at Stinking Springs] I wouldn’t be here. I would have ridden my bay mare and taken my chances of escaping,’ said he. ‘But I couldn’t ride out over that, for she would have jumped back and I would have got it in the head. We could have staid [sic] in the house but there wouldn’t have been anything gained by that for they would have starved us out. I thought it was better to come out and get a good square meal—don’t you?’

“The prospects of a fight exhilarated him, and he bitterly bemeaned [sic] being chained. ‘If I only had my Winchester, I’d lick the whole crowd,’ was his confident comment on the strength of the attacking party. He sighed and sighed again for a chance to take a hand in the fight and the burden of his desire was to be set free to fight on the side of his captors as soon as he should smell powder.

“As the train rolled out, he lifted his hat and invited us to call and see him in Santa Fe, calling out, ‘Adios.’”

The mob wants Dirty Dave Rudabaugh. He killed jailer Lino Valdez during an unsuccessful bid to free crony J.J. Webb in April. Garrett promised Dave at Stinking Springs he would take him to Santa Fe. The standoff lasts for half an hour, then an associate of Garrett’s runs up to the engine and opens the throttle. The huge steam engine spins in its tracks for several seconds, then rockets past the platform and leaves the angry mob behind.

It is Billy’s first ride on a train. He is as excited as a kid can be.

The possemen have been on the trail for weeks, sleeping in the same clothes, riding in the bitter cold. They look every bit as rough as the men they have captured. To the other passengers, there is no discernable difference between captive and captor.

Due to heavy snowfall, the train stalls at Glorieta Pass for several hours. Billy amuses the boys by ordering a piece of apple pie and placing the entire slice in his mouth. He opens his mouth and—ta da!—it’s still in one piece.

As Garrett and his posse yuck it up over this hilarious entertainment, one thing is obvious to the conductor—these boys need to get out more.

Garrett deposits his prisoners with Sheriff Sherman in  Santa Fe. There is a small snafu when Garrett orders food for the prisoners and the jailer eats it all.