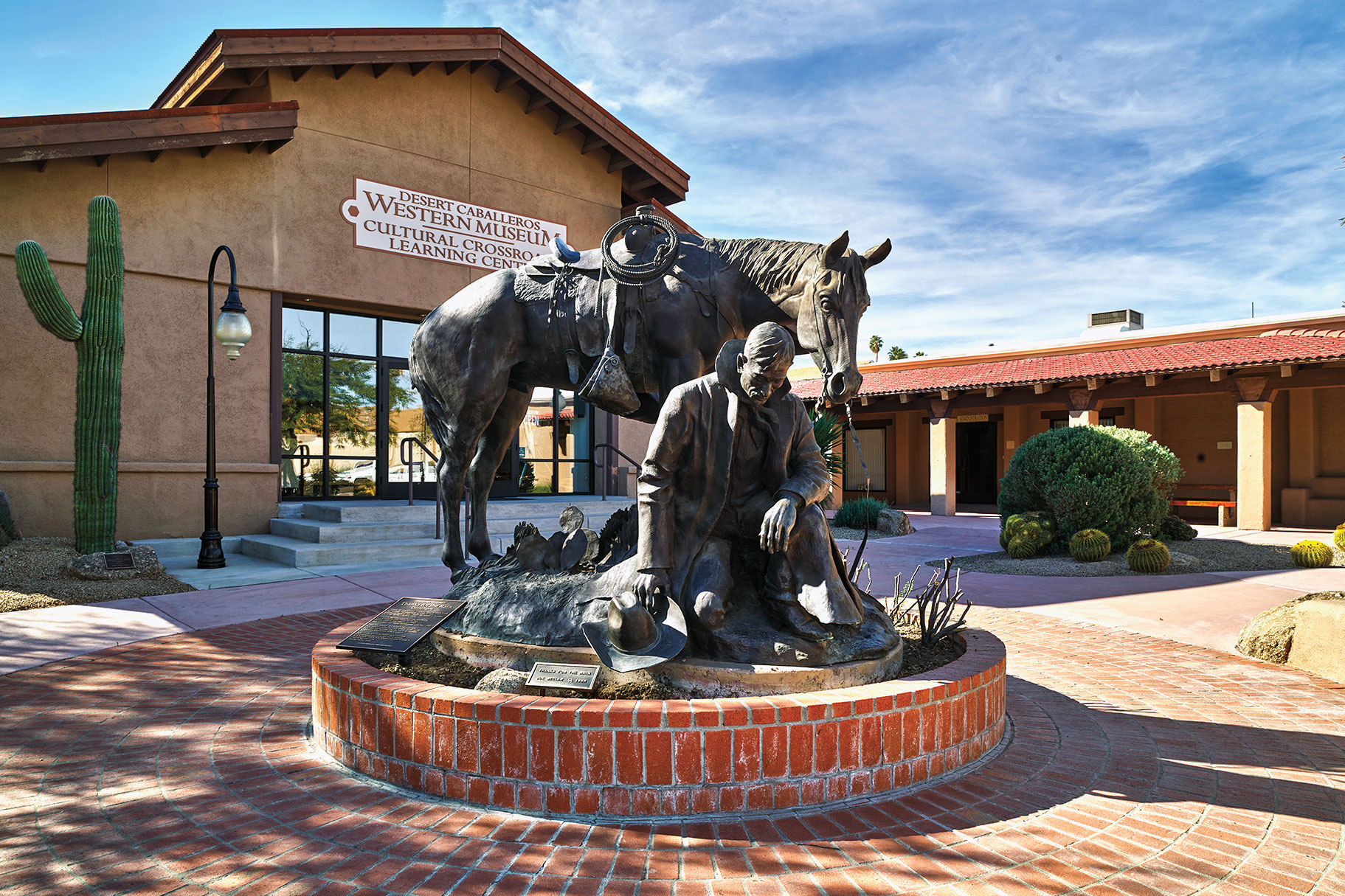 Prussian immigrant Henry Wickenburg’s founding of the Vulture Mine in 1863 brought this town to life. He discovered gold 15 miles southwest of today’s downtown, and word spread.

The mine became a bonanza, although Henry, not much of a businessman, saw little profit and died a pauper in 1905.

But his story lives on at the Vulture Mine’s modern reincarnation, complete with 12 restored structures including the stone-and-adobe assay house, tin-roofed homes and an assortment of mining gear and artifacts.

See the ironwood tree where, according to legend, high-graders, or gold thieves, met rope justice.

The Desert Caballeros Western Museum earns its reputation as one of the West’s best. March is an exciting month with the opening of Cowgirl Up!, the 15th annual exhibition and sale of more than 200 pieces by 60 of the best female artists in the Western genre.

Executive Director Dan Finley says the popular event is the only one of its kind in the country. “Our last show grossed more than $800,000, and for a town the size of Wickenburg, that’s a huge deal,” he says.

To get a feel for the town, grab a brochure at the Chamber of Commerce and walk downtown. Ben’s Saddlery has been doing saddle repair in the same building for 60 years. As the sign outside says, “Tie up, come in, swap stories.” Smell the fresh leather and browse the selection of hats and boots.

Six life-sized statues stand at various downtown locations, and with the push of a button visitors can hear stories about historical figures like Elizabeth Smith. She arrived in Wickenburg in 1897 and operated the Vernetta Hotel, now on the National Register. Smith became one of the area’s first female black entrepreneurs.

Visitors also pass what served as the town jail from 1863 to 1890, a 200-year-old mesquite tree to which outlaws were chained.

The most photographed spot in town is outside the museum, a bronze by Joe Beeler, co-founder of the Cowboy Artists of America. Titled Thanks for the Rain, it depicts a cowboy holding his horse and kneeling in prayer.

A bush grows at its base, so when it rains, visitors can smell the smoky, signature aroma of desert creosote.

“People always complement us on our authenticity,” says Julie Brooks, executive director of the Wickenburg Chamber of Commerce. “The town and private investors have taken great care to maintain our mining and ranching character.”

The restored 1895 Santa Fe Railroad Depot, which houses the chamber offices, also draws photographers. On Fridays and Saturdays from October through May, a docent leads visitors through a locomotive and a Drover caboose.

Gold Rush Days, a 72-year tradition, attracts thousands each February for rodeoing, gold panning, a mucking and drilling contest, the state’s fourth biggest parade, and entertainment from the likes of the Gatlin Brothers at the Del E. Webb Center for the Performing Arts.

An hour’s drive from Phoenix, Wickenburg is the dude ranch capital of Arizona. For horseback riding across spectacular landscape, followed by spa time and fine dining, try Rancho de los Caballeros or the Flying E Ranch. The Kay El Bar Guest Ranch took its first paying guest in 1918 and is on the National Register.

Water flowing through the desert is a magical sight at the Hassayampa River Preserve. Enjoy streamside hiking with opportunities to see wildlife, including water birds like the Great Blue Heron. But if you drink from the Hassayampa, the legend promises you’ll never tell the truth again.

Fun Fact: Some believe Victor Cedarstaff invented the bola tie in Wickenburg in 1949. It became Arizona’s official neckwear in 1971.