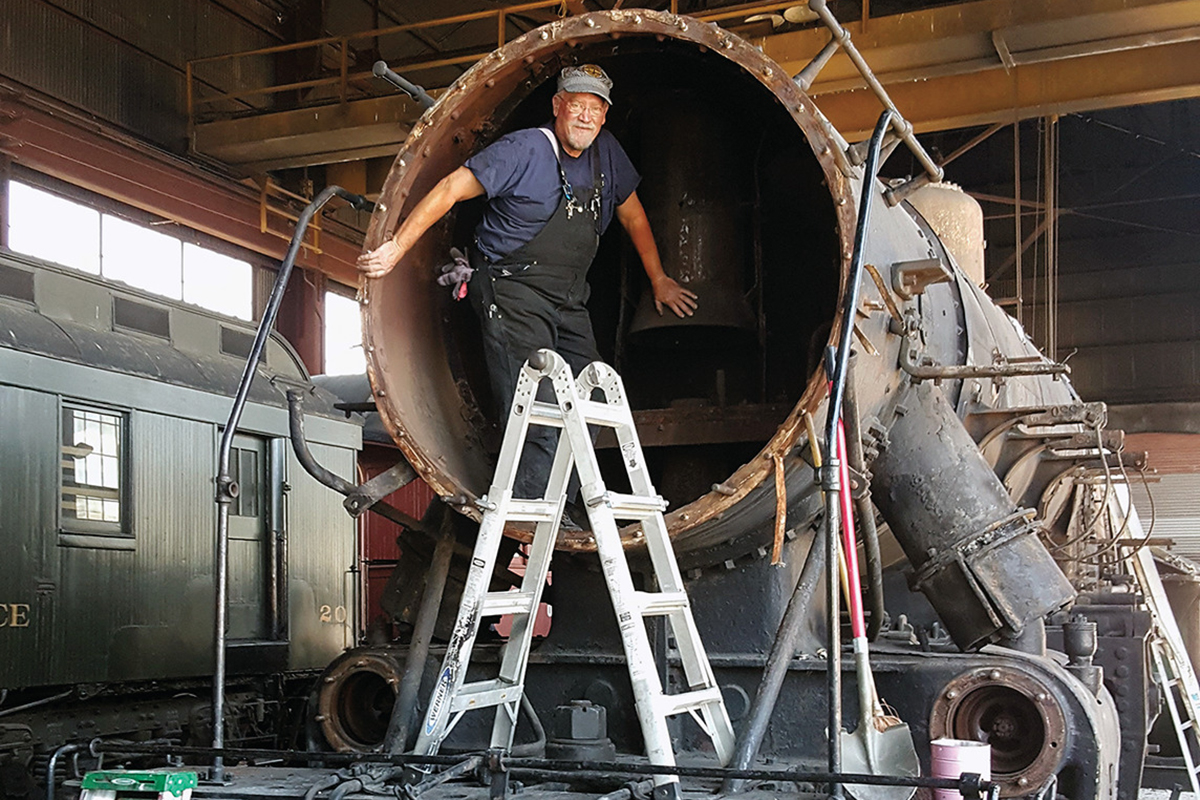 Ely, Nevada—so remote, the closest Walmart is 200 miles away—knows it’s doing something it shouldn’t be able to do.

Mark Bassett isn’t daunted. As president of the Nevada Railroad Foundation, he’s restoring a 1917 Baldwin 2-8-0 steam locomotive that has been sitting idle in the fierce winters and desert sun for over 60 years. Her name is Locomotive No. 81—”All our steam engines are ‘hers’—they’re divas: high maintenance and very expensive,” he explains.

No. 81 has long been part of the town’s pride, which goes back to 1905, when an industrious young man named Mark Requa put the pedal to the metal and built a 139-mile railroad, a mill, a smelter and opened a copper mine. All in just four years. The railroad yard covered 56 acres and included 60 some buildings. When things went south and the mine closed in 1983, Ely looked around and realized that with nothing else going on, “we’re going to wither and die,” Bassett remembers.

The town went to the copper company and suggested they turn the tracks into a tourist train that would help keep the community alive. “They said no,” Bassett says, “and most people would take that as a no—but not us. The community said, ‘then give us the railroad because you don’t need it anymore and we’ll do our own tourist train.’”

The company said yes, and the town did and now that railroad yard is a unique museum and some 16,000 visitors a year enjoy a 90-minute ride from Ely to the mine and back on the restored, historic Nevada Northern Railway tracks.

And here’s where No. 81 comes in. She’s one of the four surviving steam locomotives that once ran these tracks—at the heyday, there were two dozen of them. She’s set to go into service this year, but first, lots of work was needed. “We’ve been working like banshees over the last two years to get her restored,” Bassett says.

So, where do they find parts a century old?

“Auto Zone is not an option,” he says with a laugh, and here’s where the impossible becomes possible.

In a voice full of pride he reveals that his museum has the original working drawings for No. 81, along with original parts that have been sitting in the original machine shop all these decades, with the same tooling that have been around since 81 was a girl. “The railroad never threw anything away,” Bassett notes gratefully.

The bill is being paid by the 3,000 members and generous outside donors to his museum (NNRY.com), with folks from every state and eight foreign countries.

And so once again, little remote Ely and its hardy souls are doing the impossible and keeping alive a piece of Western history.