The Brutal Truth About Most Billy the Kid Wannabes 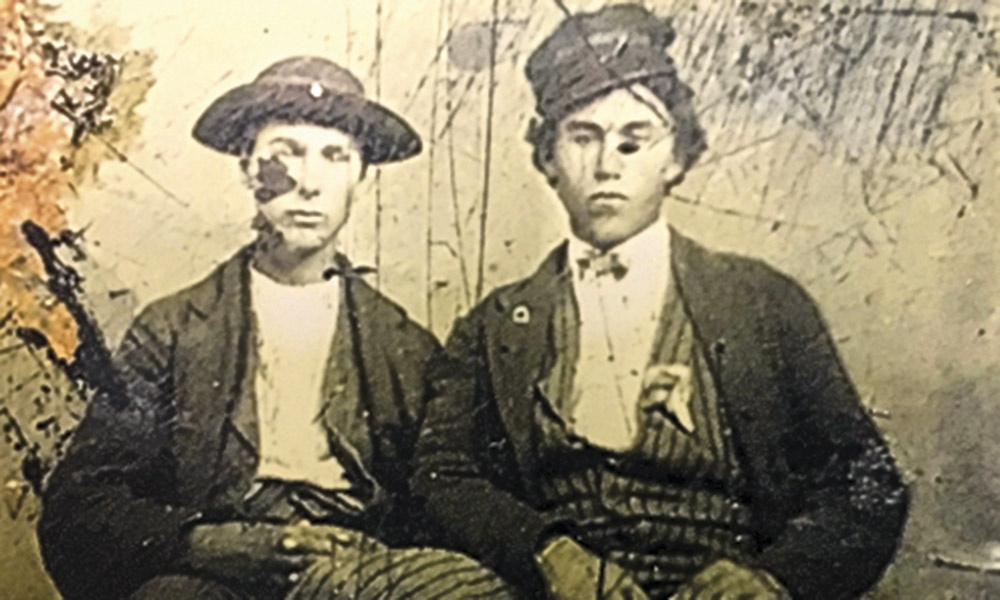 We get a “new” Billy the Kid photo sent to us almost every week. The photo of the cocky-looking gent on the opposite page is a good example.

Some guys bring the photo right into our True West office. Check out Frank Abrams, with brother Mike, and his alleged Billy the Kid and Pat Garrett photo on p. 32.

And here is a typical inquiry that hits my e-mail inbox:

“I am a reporter with the Daily Press newspaper in Victorville, California. I recently interviewed two brothers who claim to have a never-before-seen photograph of Billy the Kid posing with his brother/half brother Joseph. I would like to speak with someone from True West about the photograph and its authenticity.

“The brothers are convinced it’s Billy in the photograph for a few reasons. Here are a few:

1. The gambler’s ring on the pinkie finger.

2. The wounds on his other fingers that the brothers say are ‘consistent with a fistfight matching historical records of the fistfight between Billy and Frank Cahill.’

3. A side by side comparison they did of their photo and the authenticated Billy, which they say are similar.”

Shown at the top of this page is that alleged Billy the Kid and Joseph photograph, located by brothers Keith and Brian Collins.

Okay, here’s the deal: these Billy the Kid wannabes are invariably intriguing and always exasperating because the people who own them want True West Magazine to sign off on their claims. When we tell them we are not in the business of authenticating historical collectibles, they get upset and some of them call us names.

Some of my friends in the business have it even worse. One photo expert I know has to wear a bulletproof vest because one of these photo finders showed up at an Old West auction and pulled a Glock on him; security had to take him down. This is a bit drastic for such a lighthearted hobby, yes?

With regards to this latest batch of alleged Billy the Kid photographs: Are they fun to look at and consider, maybe this could be the Kid? Absolutely. Can we prove it’s him? No, short of a printed authenticated document from someone who actually knew the Kid and who specifically mentions the photograph in question, these are nothing more than average antique photographs.

In response to the two Collins brothers who believe their photo shows the Kid and his brother: The pinkie ring is circumstantial, wounds are totally subjective and hard to prove, and any facial recognition measuring is about as accurate as a wing ding is for direction. It’s kind of close, but so what? Although I know this brutal truth will break these folks’ hearts, someone has to tell them the truth.

The only known authenticated photograph of Billy the Kid has strong provenance. When the Kid had his photograph taken in Fort Sumner, New Mexico Territory, during 1879 or 1880, he was given four copies, in tin.

One of these was sent to an engraver to  be copied for the frontispiece in Pat Garrett’s book on the Kid, which came out in 1881, the year of the Kid’s death. We don’t know what happened to that tintype, but the document is early provenance that the image is indeed of the Kid. Another copy of the tintype, heavily doctored, was published in the years after the Kid’s death.

This tintype is known as the Upham tintype because Dedrick gave it to his nephew, Frank L. Upham. The family hired Brian Lebel, who auctioned off the tintype in Denver, Colorado, in 2011; William Koch paid $2.3 million for it.

Since news of Koch’s purchase broke, every yahoo in the world wants a similar payday for his antique photograph.

Folks try to work backwards, sometimes through fake provenance. For example, one collector in Las Vegas, New Mexico, claimed his photo of the Kid came out of a family album. The Kid did spend time in Las Vegas, so the location lent an air of authenticity. True West asked readers what they thought by putting the photo on the cover in December 1993.

When that photo sold for $30,000, the same collector quickly found another photo that he purported to be of the Kid, but this one didn’t look anything like the last one.

People also use digital “facial forensics” to try and map the contours of the face in the authenticated tintype to their new Billy discovery. This is basically a parlor trick masquerading as science. The so-called “Croquet Kid” photograph, which was featured on National Geographic Channel, relied on this sexy, but suspect technique to great effect.

I have seen so many Billy the Kid wannabe photos magically match with the only known photo that it’s not even funny.

Sorry, folks, your Billy the Kid photo is probably not going to bring you millions.