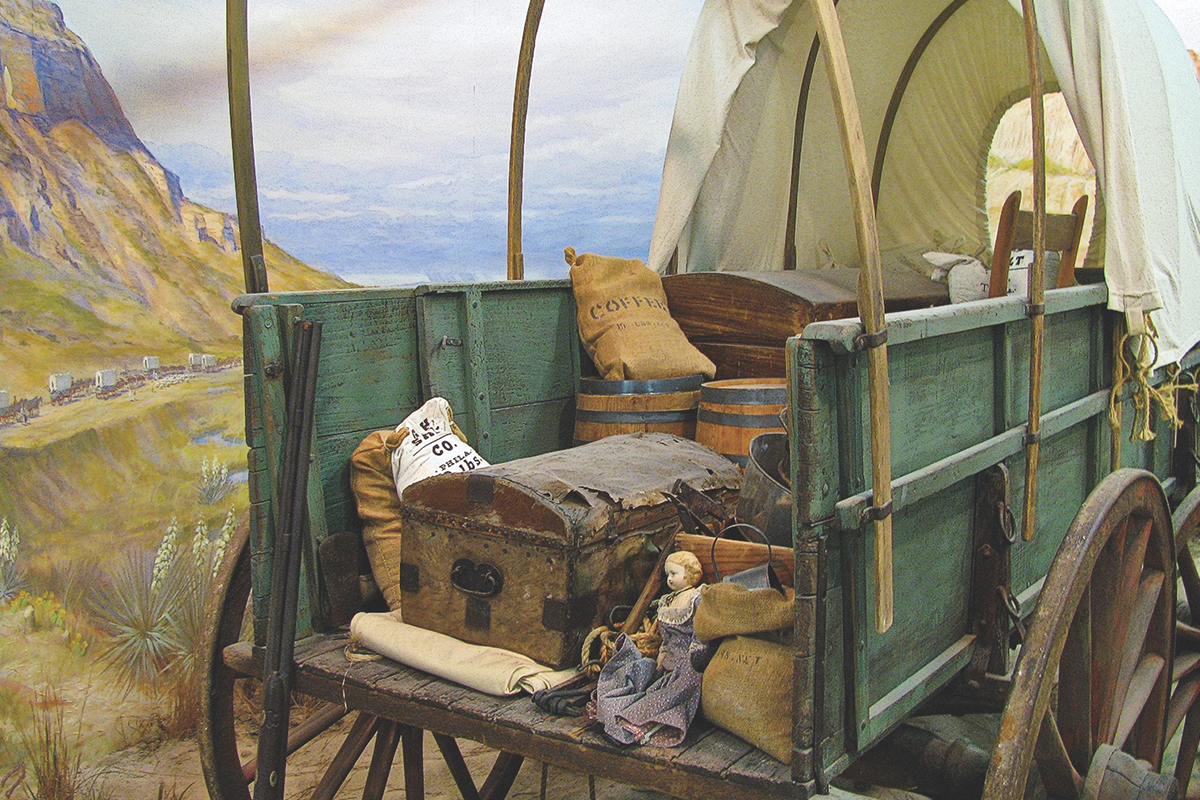 Susan Shelby Magoffin was an unlikely traveler when she set off on the Santa Fe Trail in June of 1846 with her husband, Samuel Magoffin, an experienced trader familiar with the conditions on the trail. Susan grew up in Kentucky, where her grandfather Isaac Shelby had been the first governor. Used to a household filled with servants, Susan was also formally educated.

She was only 18 when she married 45-year-old Samuel Magoffin in November 1845. Just over six months into their marriage, they loaded trade wagons and set off from Independence, Missouri, following the Santa Fe Trail—a route her husband had frequently taken in his trading operations. Their outfit, according to her diary—published as Down the Santa Fe Trail and Into Mexico: The Diary of Susan Shelby Magoffin, 1846-1847—included 14 big wagons, each one pulled by six yoke of oxen, a baggage wagon, a light Dearborn wagon that carried her maid, Jane, and was pulled by mules, and another wagon in which Susan herself rode. The fact that she traveled with a lady’s maid shows her status not only as a Santa Fe trader’s wife, but also as a woman from a wealthy Kentucky family.

In camp at night, Susan had a tent for sleeping, but it was a luxury accommodation with a bed and mattress, chairs and a table attached to the large center pole. The floor was a piece of carpet made from sail duck.

As the journey began, Susan wrote in her journal whenever the carriage stopped for a break, remarking on the treeless prairie that stretched ahead of their wagon caravan. The quiet stillness of the first Sunday morning on the trail contrasted with the earlier days when teamsters cursed oxen not yet accustomed to pulling wagons.

Susan wrote of prairie flowers, wild roses and a party of U.S. Army Dragoons who overtook their caravan en route to Santa Fe as tensions escalated between the United States and Mexico.

Across the Wide Missouri

They traveled from Independence, Missouri, to Olathe and Council Grove, Kansas, an area Susan described as “a wide expanse of Prairie; as far as the eye can reach nothing but a waving sea of tall grass is to be seen.” West of Council Grove, they encountered Charles Bent, who was returning to Missouri from the fort he had established farther west. This meeting gave Susan an opportunity to send mail back to her family, so she quickly wrote a letter to her father and sent it east with Bent.

Susan truly enjoyed traveling and writing about her experiences in great detail, so much so that her journal is a primary source document for anyone writing about the Santa Fe Trail today—and it is a singular piece of writing that led to her induction into the Western Writers Hall of Fame. “I have books, writing implements, sewing, knitting, somebody to talk with, a house that does not leak and I am satisfied,” she penned while in camp on one particularly rainy day.

She feared snakes and grasshoppers—which she described as the “green bug,” an “aligator [sic] in miniature”—saying she held her dress up out of the grass to avoid the bug. She wrote of the incessant whine of mosquitoes, prairie dogs and migrating herds of buffalo. They reached Pawnee Rock, the halfway point on the trail, just west of present-day Great Bend, Kansas, on the Fourth of July, and Susan wrote that she “cut my name, among the many hundreds inscribed on the rock.”

But that wasn’t the only momentous event of the day, because when they reached Ash Creek, their carriage approached the steep bank and before Susan could climb from the vehicle, as she often did when there was a particularly steep place in the trail, the carriage was “whirled completely over.” The carriage had extensive damage, and Susan wrote that she hurt her side and back. Samuel, who was riding in the wagon with her, injured his arm and hip.

The wagons soon halted, not because of the accident, but on order of the government. The tension with Mexico was even stronger and the traders were not allowed to continue traveling until additional troops joined them, even though by then the caravan had 70 to 80 wagons. Susan thought it probable they would remain in camp near Pawnee Fork for 10 days, waiting for additional troops, but just five days later, they received word they could continue their journey west to Bent’s Fort, on the Arkansas River.

A Sea of Grass

It took almost two weeks to travel across western Kansas, following the Arkansas River to the fort that Charles Bent and Ceran St. Vrain had built in the early 1830s to serve as a trading site along the Santa Fe Trail. Today’s highway route follows U.S. Highway 56 through Larned to Dodge City, and then continues west on U.S. Highway 50 to Lamar and Las Animas, Colorado. Just north of Las Animas, take Colorado Highway 194 west to Bent’s Old Fort National Historic Site, midway between Las Animas and La Junta, Colorado.

By the 18th of July, Susan was quite ill, and Magoffin sent a man ahead of them, to find a doctor he knew traveled with a wagon party that had earlier passed the Magoffins. This doctor, whom Susan characterized as a “polite, delicate Frenchman,” had sandy hair and whiskers. When overtaken by Magoffin’s man, the doctor, actually a Belgian, waited for their wagons to catch up, and then he joined their party to care for the ill woman.

Susan referred to the intense thunderstorm that struck on July 21 as one that caused a “ship-wreck on land” because the violent winds and heavy rain drenched their camp, and collapsed the tent on top of Susan and Magoffin—with the center tent pole striking her as it fell. She spent part of that storm-ravaged night in their carriage. Some of the Mexicans traveling with them pulled the carriage near the baggage wagon and tied the wheels together so the light vehicle would not overturn in the violent winds. Finally, when the rain abated, Susan found her way to Jane’s carriage, where she took over her maid’s bed.

Citadel of the Plains

The Magoffins passed a soldier’s camp on Monday, July 27, and after traveling another four miles, came to Bent’s Fort. To Susan, Bent’s Fort was just like an ancient castle. Built of adobe bricks, with rounded corners and a large gate on the east side, the fort had a large square some 90 to 100 feet across, surrounded by about 25 rooms used as bed chambers, kitchens, trading rooms, a dining room, blacksmith’s shop, an ice house and more, including a billiard room. The upper-story rooms provided more area for lodging.

The fort’s hustle-bustle—the comings and goings of traders, Indians, Mexicans, and the sounds of chickens, cattle, mules and other livestock—set Susan’s nerves on edge, in part because she was ill. And, in fact, within days of her arrival at the fort, while still under the Belgian doctor’s care, she had a miscarriage.

“My situation was very different from that of an Indian woman in the room below me,” Susan wrote on July 31. “She gave birth to a fine healthy baby, about the same time, and in half an hour after she went to the River and bathed herself and it, and this she has continued each day since.” During that same period Susan was “forbidden to rise from my bed.”

The Magoffin wagons rolled away from Bent’s Fort on August 8, bound to the southwest on the mountain cutoff of the Santa Fe Trail. They crossed Raton Pass, continuing south to Mora and Las Vegas, New Mexico, before arriving in Santa Fe on August. 31. By then the U.S. Army under command of Stephen Watts Kearny had taken control of the region. The Magoffins eventually left Santa Fe and continued south into Mexico—but that is a story for another time.

Special 2021 Celebrations for the Bicentennial of the Santa Fe Trail 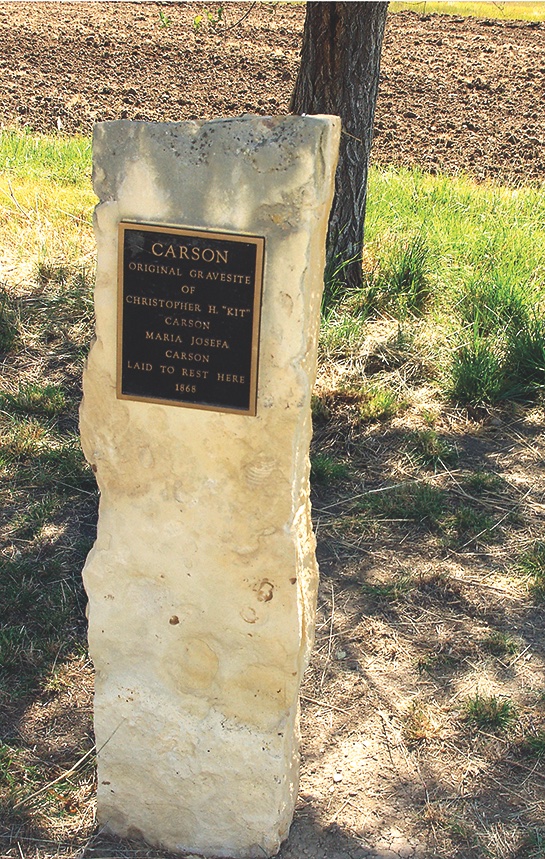 As early as 1806, Zebulon Pike wrote about camping along the banks of the Purgatoire River, and in 1820 Maj. Stephen Long also camped in the location and wrote about it. Thomas Boggs started working at Bent’s Old Fort in 1840, spending about six years at that site as a trader and learning the languages of the tribes that frequented the area, as well as the Spanish spoken by the many laborers at the fort. For a time Boggs worked for Lucien Maxwell of Cimarron, New Mexico, bringing sheep and cattle to the area along the Purgatoire River for summer pasture.

By 1862, Boggs, through his wife, Rumelda, obtained land from the Vigil & St. Vrain/Las Animas Mexican Land Grant. They built a home beside the Purgatoire River in 1862, and the town of Boggsville was established in 1866. The following year, Kit Carson, a friend of Boggs, secured his own land grant and moved into the first house Boggs had built in 1862. Boggsville quickly became a gathering place for settlers and at one time had more than 30 buildings. But then the Santa Fe Railroad established a railhead two miles to the north, in Las Animas…and soon Boggsville became a ghost of itself.