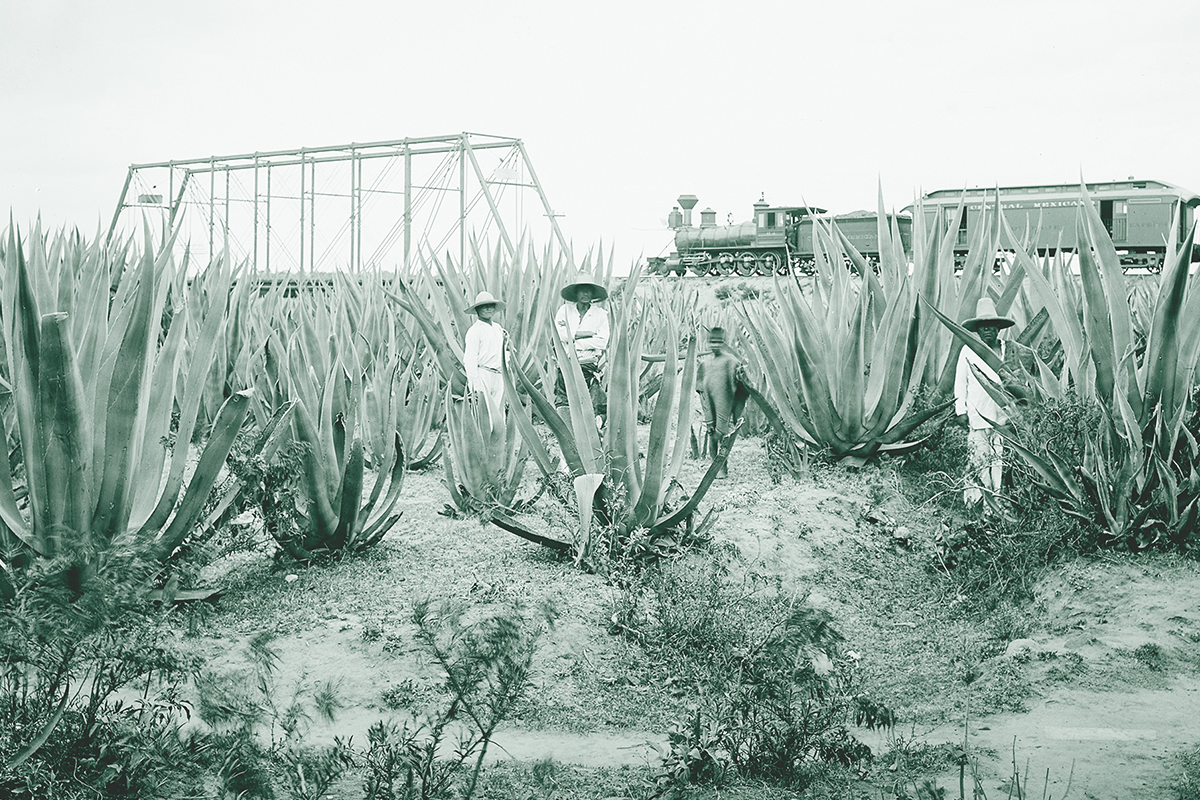 The Mexican spirit is legendary on both sides of the border.

The smoky mezcal (or mescal) spirit, a signature product of Mexico, found its way across the border and into the hands and mouths of many a pioneer. This potent alcohol is derived from the agave plant much like tequila is, but the distillation process and type of agave used are different. Tequila is steamed in copper pots and made with blue agave only, while mezcal is cooked in earthen pits with wood and can be made with any agave species.

Mezcal was mentioned in frontier newspapers as early as 1855 when the Rocklin, California, The Placer Herald published an article that reported, “The roots of the mescal plant, a variety of [the maguey plant], which grows in our state, is used for making the spirit called mescal,” and by 1861 it was being sold at grocery provisions stores in Los Angeles. In 1865 the Santa Fe, New Mexico, Weekly New Mexican published a story about the bounty of the land in the state. The article identified the maguey plant, known as the American aloe, and noted that it was an abundant wild plant. “The Mexicans make a brandy they call mescal. It is distilled by the simplest and rudest process. We saw a sample which has been made with care, and was four years old, which has an oily body and the flavor of the best brandy. The Indians esteem this plant a great delicacy [and] they cook the heart of the plant. It would be valuable in the manufacture of vinegar.” Two years later, the Salt Lake City, Utah, Deseret News printed a lengthy story on what it called a century plant and its purpose. It noted that the juice or “pulque dulce or sweet pulque” is extracted, fermented and distilled to make mescal, while the leaves were used for roping, utensils, etc. “Instead of wondering about the ‘Century Plants’ and their flowers, it would be in better taste and far more profitable to avail ourselves of the many and wonderful properties of the agave Mexicana.”

Sam Graves, a well-known miner in southeast Arizona, traveled to Mexico in 1882. With his Mexican burro and an American mule he went to Sonora, where he purchased his first gallon of mezcal. After setting up his camp for the night he sampled his new purchase “out of curiosity.” Since he didn’t notice any mental changes, he tried it again and then proceeded to make his dinner. Still nothing happened, so he sampled some more, lit a pipe and settled into reading his latest edition of the Tombstone Epitaph. He read a story of Apache sightings in the area, and well, the mezcal began to work. Thinking his animals were making noise, he admonished them, and then settled into a bleary sleep. When he woke up the next morning, his mezcal jug was gone, but he soon discovered it was being consumed by some native Mexicans. He did not challenge them and moved on to a ranch along the San Pedro River and purchased another jug. He later got into a gunfight with Mexican custom house officials who thought he was a smuggler. They soon realized he wasn’t and allowed him to head back to Tombstone. It was reported he was seen at a late hour searching for a saloon that offered his newly discovered mezcal.

Mezcal was often served at festivals like the annual feast of St. Augustine in Tucson. The 1882 event in September saw over 3,000 attendees who mainly feasted on watermelon, mezcal and whiskey. No historic recipes were located for mezcal, so I created this one using the ingredients consumed at the feast:

Place ingredients into a blender and puree. Serve in a margarita glass rimmed with salt.