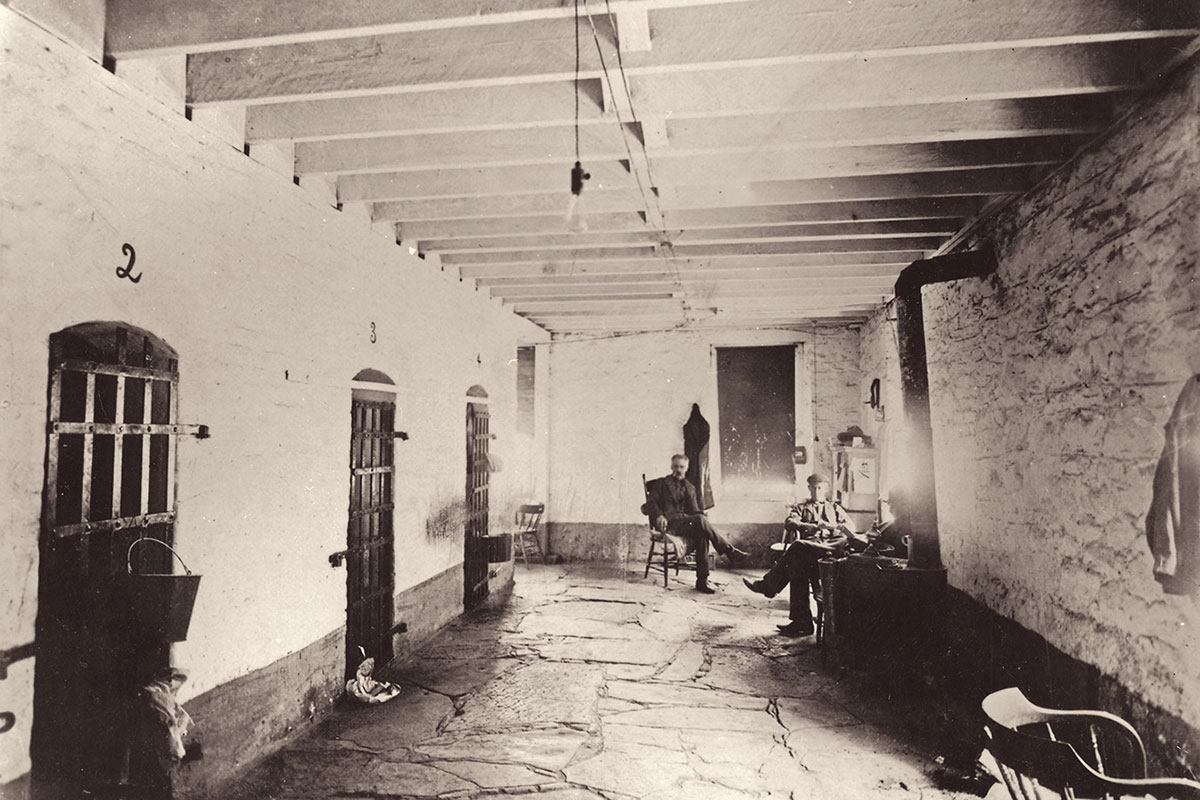 As the sun was rising, Holm Olaf “H. O.” Bursum had peered from a window, pleasurably internalizing the scenic grandeur of snowcapped mountains on the distant horizon, those overlooking Santa Fe, New Mexico Territory. Now, just a few hours later, there was not a hint of serenity. Standing on an upper tier platform that 17th day of April 1901, Penitentiary Superintendent Bursum was desperately peering through the sights of a Winchester. A vicious prison break was unfolding right below his perch. His index finger lightly  teased the trigger—momentarily.

Scarcely a year earlier, the regionally well-recognized manhunter, William D. “Keechi” Johnson, and his fellow Grant County deputy sheriff, Miles Marshall, had exhaustively trailed convicted murderer George Stevenson and another escapee throughout the Southwest’s border country, deep into Old Mexico. The whole wearisome business, after the jailbreak at Silver City, had taken nearly three months. That was a hard fact not missed by a Silver City Independent newspaperman, who emphasized the hunt was “one of the longest pursuits ever made by a local officer.” At last, 26-year-old Stevenson had been deposited behind prison walls and issued an inmate’s number, 1402. Unbelievably, in light of his nasty criminal history and multiple attempts at escape, he had landed a cushy job in the prison’s bakery.

Equally intriguing is knowledge that when Stevenson left his cell showing up for work that morning, underneath his apron was a .38 caliber Smith & Wesson revolver and some 50-odd cartridges. Baker Stevenson had cooked up a break-out plot, not cathead biscuits and light bread. At his elbow, stoking the fires of illicit liberation were two convicted Chaves County thieves: 26-year-old William Simmons, #1318, and 22-year-old Frank Carper, #1403. These boys didn’t carry six-guns, but were not armed with muffin-tins or pie pans, either. Each carried “solid iron rods, two feet in length, and one inch thick.” The trio of kitchen convicts—dimwits, if you will—had baked up a recipe for tragedy.

Near the bakery Stevenson took a potshot at Captain-of-the-Guard Felipe Armijo, who had thrown a heavy wooden chair at George as he hastily ran away, not seeking cover or a coward’s reprieve, but racing for a scattergun kept locked in the No. 1 watchtower. Stevenson’s next bullet tore into guard Pedro Sandoval’s head, creating a wicked-looking but less-than-lethal furrow. Returning with the shotgun, Armijo let loose, several pellets striking but not disabling the hellbent Stevenson. Mad as a hornet, George returned fire three times. Luckily, two bullets missed. Unluckily, the third one struck Armijo’s jawbone. Stevenson ran, haphazardly searching for his next target. Spitting teeth and blood, Armijo regained his feet, and with true sand in his gizzard, chased after the gun-wielding inmate—that is until he saw Simmons holding the prison physician, Dr. David Knapp, and guard Carlos Dominguez, hostage. Assertively, Felipe Armijo snap-fired the shotgun’s second barrel—straight through a glass windowpane. Most of the buckshot weighted Simmons’ mobility and meanness. He collapsed as if axed, perforated as a pincushion. Frank Carper, amid thunderous roars, blue smoke and horrifying shrieks had had enough! Frank lost his nerve, giving up any bid for liberty. Standing in a puddle of his own making, he was hypnotically dazed.

Badman Stevenson, a human tiger, was yet insecurely caged, still behind prison walls. Nevertheless, George was more-than-a-little dangerous, still clutching that smuggled S & W and a hefty supply of ammo. He’d shoot—that was a given. Bursum, like Zwing Hunt, was a man that would do to go tiger hunting with. From the ground floor Stevenson, pistol in hand, looked up and into the steely eyes of the superintendent. Would he kill the superintendent where he stood? Could he? Time was short. Bursum looked down, right through his Winchester’s rear sight to the front bead—which rested on convict Stevenson’s fast-thumping heart. He squeezed the trigger. Bang! And levered another round. Bang! And levered another round. Bang! Two to the heart, one to the right eye. George Stevenson had caught all three of H. O. Bursum’s bullets before he even somersaulted to the concrete—sledgehammer dead.  There’d be no fresh bread that day.

Two days after the failed prison break, suffering horribly, William Simmons, “who had been shot in the loins and liver,” passed to the other side at Santa Fe’s Saint Vincent Hospital.

During the bloody mêlée, somehow, prison inmate Jóse Monica Sena, #1392, was wounded, either misidentified as a blundering escapee or willfully trying to aid his fellow convicts. Thankfully, he survived the gunshot.

Just how or just who helped inmate George Stevenson obtain a working revolver and a box of 50 cartridges inside the penitentiary is now, and will probably forevermore remain, a mystery.

Grant County Deputy Keechi Johnson, while George Stevenson was still confined in jail at Silver City, was killed during a shoot-out with suspected cattle rustlers along Raw Meat Creek in the rugged Mogollon Mountains north of town.