Born to the West 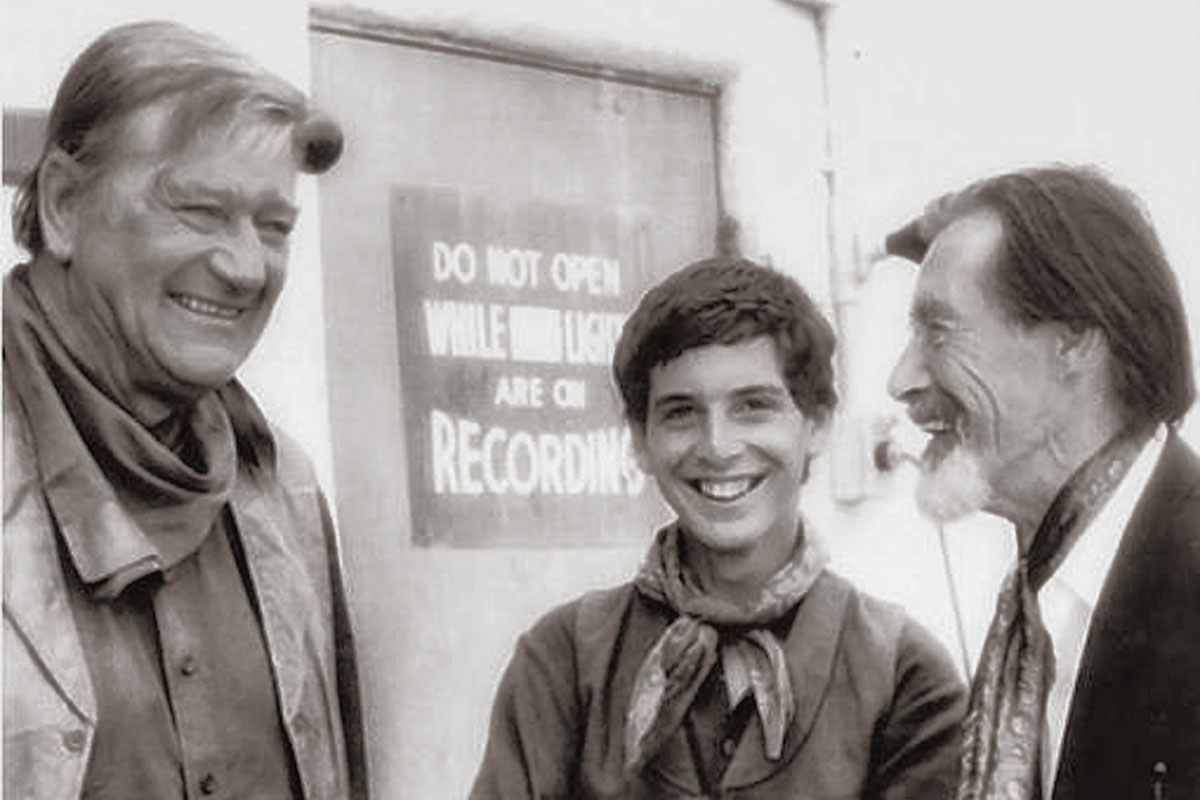 Robert Carradine remembers, “After all of us went into [acting]—my brother David, brother Keith, myself, my half-brother Michael Bowen, my daughter Ever, Keith’s daughter Martha Plimpton—my father remarked that he’d created a dynasty.” Said father was John Carradine, one of America’s finest actors, whose Western credits in 1939 alone include Stagecoach, Jesse James and Drums along the Mohawk.

Robert’s long screen career began with The Cowboys, at age 17. He was living with his brother David, “and one day he says, ‘There’s a movie casting over at Warner Brothers called The Cowboys, about school-kids John Wayne hires to herd his cattle to market. You want to go meet him?’ I said no. He said, ‘No? You’ve got everything to gain and nothing to lose.’ That stopped me.” Robert went in, met director Mark Rydell, and read the schoolhouse scene. “I read this ridiculous poem in front of the John Wayne character. I was as nervous as could be, and it worked: that’s how I got it.”

The dozen boys they cast were an interesting mix. “Half were real cowboys, and half were actors. They spent three months teaching us every day, four hours a day on horseback. They also taught us how to throw a rope, which was a skill I’ve carried with me through many Westerns.”

Carradine first worked with Wayne in the scene where each cowboy has to stay on the bucking horse for a count of eight to be hired. A. Martinez’s character amazes the others with his skill, then contemptuously tells the next boy, “Maybe you can ride him now.” Carradine remembers, “The kid comes off the fence and starts going after A. Martinez, and I go to help my little buddy. The Duke breaks us up and says to me, ‘You get back up on that fence where you belong.’ And I stopped him. ‘Hold on a second, Mr. Wayne. I’m the head kid. It’s okay if you want to tell me to get on the fence, but I don’t think that you should say where you belong.’ He looked at me like I had two heads. Then he lit into me, reduced me to tears by the time he was done. What would possess a 17-year-old in his first movie to try to direct John Wayne?” At the wrap party, Wayne was signing autographs; the other boys had grabbed 8x10s of The Duke. Carradine took one and got in line. “I hand him the picture, he’s about to put pen to paper, and he looks at me. ‘Carradine, you stupid son-of-a-bitch, I just made a picture with you!’ and gave back the photo unsigned, which I took as a compliment—that we’re colleagues.

“Bruce Dern relished that role. He loved scaring the crap out of us.” In the scene where Dern catches one boy, and threatens to kill him if he tells Wayne they’re being followed, he “takes the kid by the collar, stuffs the kid’s head underwater, and pulls him back up. ‘You got it, boy?’ And he does it again. ‘You got it, boy?’ And the kid’s like, ‘Got it! Got it!’ That was not planned. That was Bruce.”

The next year Carradine played Bob Hatfield in a TV movie. “The thing about The Hatfields and the McCoys was hanging out with Jack Palance. The character that he played in City Slickers, that was him.” Also in the cast was James Keach. “That was the germ for The Long Riders. James Keach said, ‘How would you feel about doing a story about the James Younger Gang? It’s me and [brother] Stacy; you, David, and Keith; Randy and Dennis Quaid; and Jeff and Beau Bridges.’ The Bridges backed out because they didn’t want to be the guys that shot Jesse James in the back.

“The sum of the three Carradines is bigger than just three guys; there’s this undefinable essence, and it was there with the Keaches, the Quaids and the Guests. You’d see similar mannerisms and quirks and reactions, that you wouldn’t have if you had actors playing brothers. It was an incredible dynamic.”

Carradine returns to Westerns whenever possible. About Django Unchained, he says, “My brother Mike [half-brother Michael Bowen] and I were really glorified extras. I was supposed to be a hunchback, but the outfit looked ridiculous, so we scrapped that and just made me a halfwit.”

In 2017, Carradine appeared in Justice. “There was no extra money. It had to run like a Swiss watch to get it done, and our director and DP were a great team.” Just released is Bill Tilghman and the Outlaws, wherein a company makes a movie about a bank robbery, starring real lawmen and outlaws. Carradine plays Frank James, Darby Hinton plays Cole Younger, and Johnny Crawford plays William S. Hart. “I thought Justice was close to the bone! God, we were doing everything we could to get that sucker done on time. It was a 12-day shoot, and some days we’d shoot 12 pages!”

Why does he keep at it? He recalls filming The Big Red One, surprised to see Lee Marvin on-set on his day off. “I said, ‘Lee, what are you doing here?’ He said, ‘The set is where it’s at.’ I told that story to Tom Selleck on Monte Walsh, and he’s been repeating it ever since.”