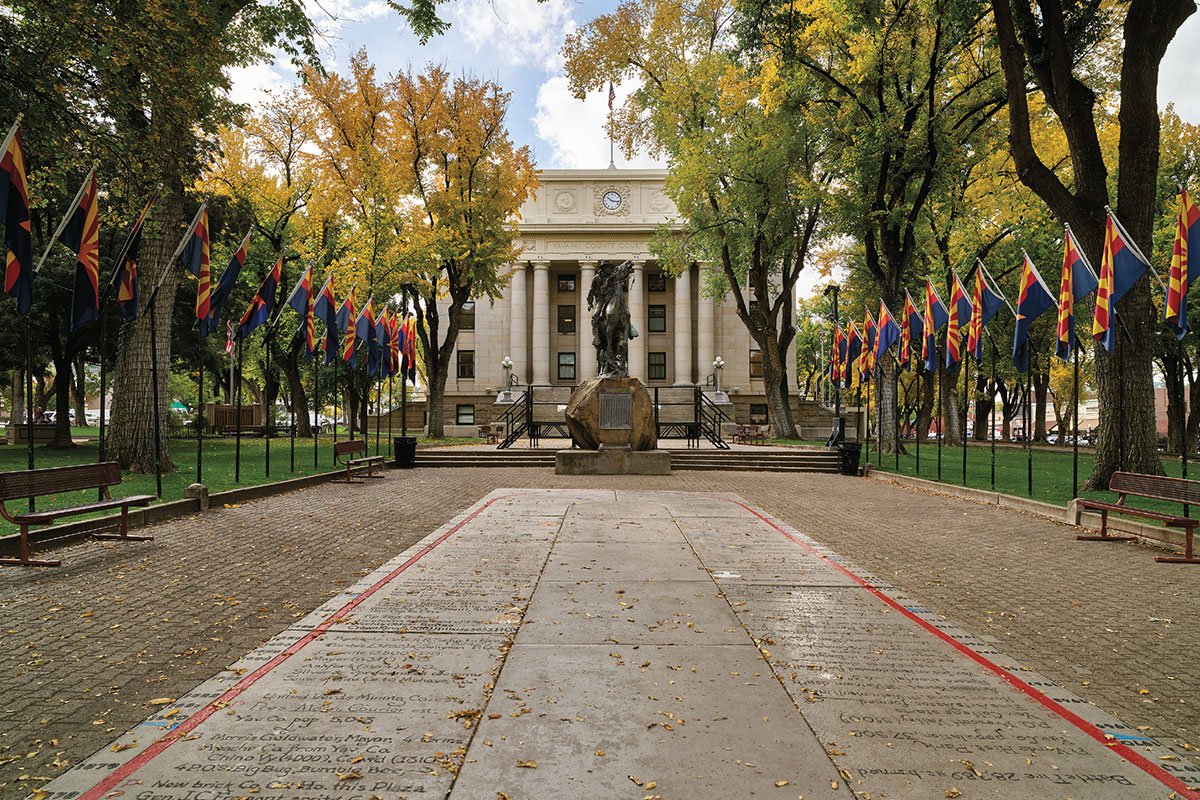 In the story of Prescott’s founding, the Western trailblazer Joseph Walker, whose party found gold near here in 1863, gets the ink. But the best story belongs to Sam Miller, one of his men.

After shooting a lynx on a creek, Sam went to pick it up and the animal, still alive and understandably cranky, grabbed his wrist, setting off a struggle that ended, in one version, with Sam stomping his adversary to death.

The gold discovery brought a flood of settlers, sparking the founding of Arizona’s first Territorial capital in 1864.

To learn about this jewel in the state’s central highlands, and about the lives of men like Sam Miller, visit the beautiful grounds of Sharlot Hall Museum.

Opened in 1928, the facility’s six historic buildings include the original Territorial Governor’s Mansion, a log cabin expertly furnished to look as it did when it was built in 1864. Visitors can also step inside the 1875 Fremont House, a Gothic-style cottage with six entrances, three verandas and walnut furniture upholstered with horsehair.

Don’t miss the Frontier Christmas celebration on December 7. After enjoying music, cookies by a roaring fire and the museum’s living history re-enactments, walk two blocks to downtown’s Courthouse Plaza to see the dazzling Christmas lights around the Yavapai County Courthouse.

For a different celebration, cross Monte-zuma Street to the saloons along Whiskey Row. Few spots in the West could match it for wild doings in the 1860s and 1870s.

Brad Courtney, author of Prescott’s Original Whiskey Row, found a local newspaper notice from 1869: “Our once quiet village is getting to be a regular pandemonium. Drunken men quarrel, fight, and shoot. Let us have a night watchman or two, who will muzzle the men.”

At the Palace Restaurant and Saloon, see the excellent historic photos along one wall—Wyatt and Doc prowled the same street, so try not to act like a Clanton—and check out the painting of Steve McQueen from the 1972 film Junior Bonner. Watch the picture and enjoy the wild fight scene filmed at the Palace.

The movie centers around Prescott’s rodeo in July, billed as the world’s oldest. It began in 1888 and is still raising dust.

In addition to exciting horseback action, Prescott’s Frontier Days celebration includes a parade and dancing—and the fun of watching cowboys in big hats striding around.

Prescott is a great walking town. Read historical plaques along Whiskey Row and stroll to nearby Mount Vernon Street to see the collection of gorgeous Victorian homes.

Be sure to check out the bronzes on the Courthouse Plaza. The Rough Rider monument honors Buckey O’Neill, a Prescottian killed in Teddy Roosevelt’s 1898 charge up San Juan Hill. Often overlooked but equally impressive is another bronze, Cowboy at Rest, on the plaza’s south side.

The Smoki Museum is hard to miss, literally. Built in 1935 of native stone to resemble a Hopi pueblo, it houses a huge collection of Indian art and artifacts, including Hopi Kachinas and baskets from the Yavapai and Western Apache people.

While scouting around, find the plaque marking the site of the Walker Party’s gold strike. At its peak, the population of the town of Walker approached 3,000. Prescott National Forest has directions.

Fun Fact: Fiorello La Guardia, New York City’s mayor from 1934 to 1945, was raised in Prescott and attended public school here. “All my boyhood memories are of those Arizona days,” he wrote. “To me that is truly God’s country—I love everything about it.”