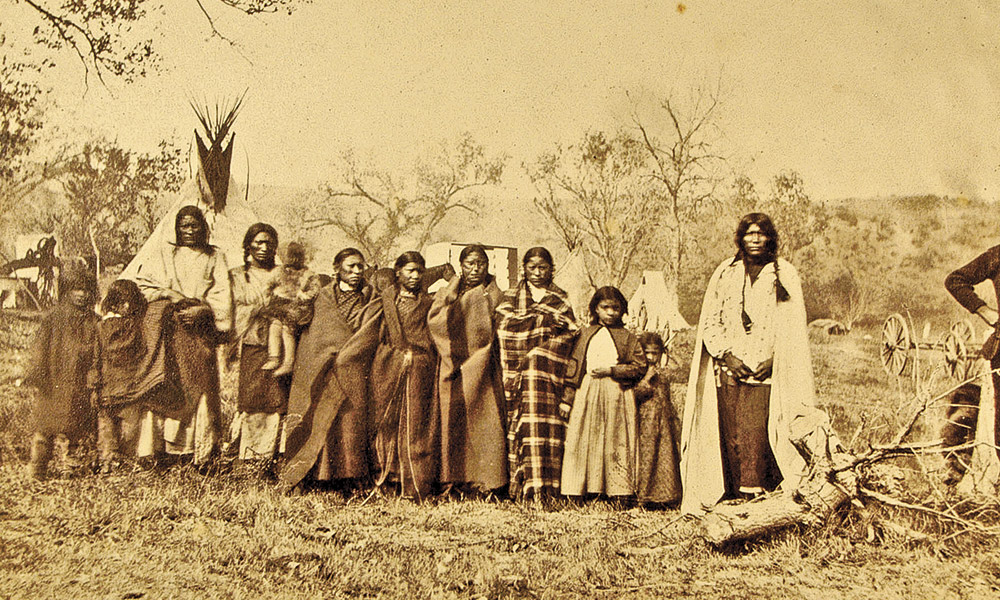 In December 1868, George Armstrong Custer peered down at a beautiful, freckle- faced white woman frozen in the snow. Clara Blinn had been shot in the head and brutally scalped. Her two-year-old emaciated son, Willie, lay near her. Evidence indicated that he had been taken by the feet and his head slammed against a tree.

These captives had been killed “tit for tat” after Custer attacked a nearby Cheyenne camp along the Washita River two weeks earlier. As a cavalier in buckskins, he had not saved the damsel in distress, and he would not forget the sight that he later wrote about in My Life on the Plains.

Custer’s first American Indian fight, in present-day Oklahoma, had almost been his last. He attacked Black Kettle’s Cheyennes  along Washita River on November 27, 1868, with little intelligence. Custer’s “luck” was present when he hit a small camp segregated from a nearby massive camp of nearly four miles in length.

He quickly took captive of at least 53 women and children. Osage scouts with Custer killed most of the noncombatants who did not survive the frozen dawn chaos.

As Custer’s troops destroyed Black Kettle’s Cheyenne encampment through the concept of “total war,” approximately 1,500 other warriors from the downstream camp surrounded the troops.

As the warriors fired at the soldiers, Custer quickly placed the captives in the line of fire; their screaming stopped the incoming bullets.

That evening, realizing the precarious situation of being surrounded, he decided to feint an attack on the larger camp and placed the Indian captives in the moving column. Three Indian accounts noted that they were afraid to fire at the soldiers for fear of killing the captives. Custer countermarched in the evening darkness and saved his command.

Custer would soon chase those other 1,500 warriors who included Cheyennes, Kiowas, Arapahos and Comanches. Encountering the Kiowas first, he parleyed with Chiefs Santana and Lone Wolf who promised to bring their tribe to the reservation.

Custer soon realized the 20 Kiowa messengers supposedly encouraging the tribe to return were merely escaping. Feeling deceived, he took the two chiefs hostage and threatened to hang them. The Kiowa tribe quickly agreed to move to the reservation, and the chiefs were released.

In early January 1869, Custer moved into the Arapaho camp, “knowing that the close proximity of their women and children, and their necessary exposure in case of conflict, would operate as a powerful argument in favor of peace….”

Using the noncombatants as possible body shields, he convinced them to head to the reservation.

Chasing the Cheyennes into the Texas Panhandle, he realized that they had two white female captives. Thinking of Mrs. Blinn, he resisted his angry troops, who wanted him to attack.

Custer decided to ride into the camp, because, “in case of an outbreak of any kind it would be impossible for a great portion of the village, especially the women and children, to escape.”

As much of the village fled, he took three Cheyenne leaders hostage. He demanded the return of the white women and that the tribes return to their reservation—or else he would hang his three captives.

Results were successful. The white women were released, and the Cheyennes surrendered. Unfortunately, during a transfer to the guardhouse, two of the leaders were killed, however, the third survived.

In the summer of 1874, the 7th Cavalry explored the Black Hills in search of a site for a future fort and to see what resources the hills contained. While the shout of “Gold!” was soon heard, leading to the Sioux campaign of 1876, a largely unknown event occurred.

Stumbling upon a small band of Oglala Lakotas, Custer seized an old man named One Stab, who was used as a guide and possible body shield until the 7th Cavalry left the Black Hills, at which time, the old man was given ample provisions and sent on his way.

Many historians and scholars have largely ignored Custer’s switch in modus operandi in his dealings with Indian tribes. Rather than charging recklessly, as he had done along the Washita, and witnessing the aftermath, Custer performed a great deal of psychological manipulation of the tribes.

Hanging was a dreaded manner of death to tribesmen, as choking to death would not enable the soul to leave the body upon death. Custer would use hostages to his advantage to save his troops and white captives. He would also use noncombatants as protection.

Before the Battle of the Little Big Horn, the commander of the 7th Cavalry would fight warriors only three times, while taking hostages and using them as a buffer on six occasions.

Indians often used hostages as body shields and for personal financial gain. Neither side was immune from what today many look at as the ultimate in deception and perhaps cowardice. But from a practical standpoint, it worked, without a large loss of soldier lives—until the Little Big Horn battle in June 1876.

As Custer galloped his 7th Cavalry toward Sitting Bull’s massive camp, which was similar in size to the numerous tribes located along the Washita, he once again considered hostage-taking.

Custer surprised the village. As he peered through his field glasses from a high bluff, he saw women and children below. Most of the warriors were asleep, as many had stayed awake most of the night in ceremonies.

Custer’s surviving orderly trumpeter and last messenger John Martin overheard his plan: “‘We will go down and make a crossing and capture the village’…. And the consensus of opinion seemed to be among the officers that if this could be done the Indians would have to surrender when they would return, in order not to fire upon their women and children.”

Custer’s final movements on that hot Sunday afternoon seemed to indicate that this was exactly what he attempted. He stated that Indian warfare was a “distinctive and separate species of hostilities, requiring different talent, different material, as well as personnel, and different rules of conduct.”

Michael Donahue is the author of the award-winning Drawing Battle Lines. His new book, Where the Rivers Ran Red: The Indian Fights of George A. Custer (San Juan Publishing), is the only volume that holistically explores all four of Custer’s fights in detail and how they altered Custer’s “Last Stand.” The book is the result of 45 years of research as well as the author’s 29 years of access to the battlefield and archives as a seasonal ranger at Little Bighorn Battlefield National Monument.