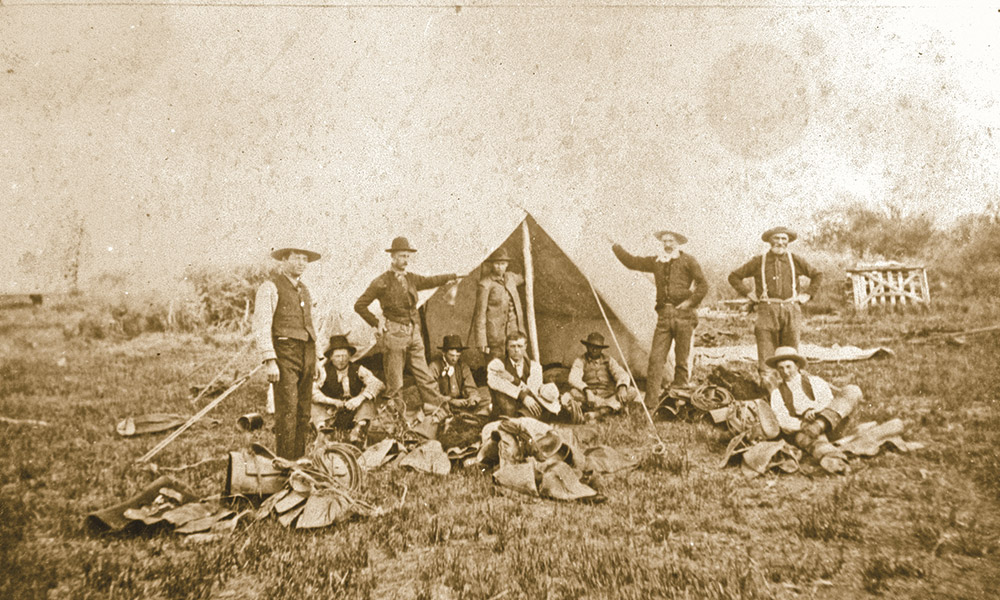 Back in the 1920s, renowned Western artist Charles M. Russell, who knew a thing or two about cowboys and how cowboying got started, noted, “Texas an’ California, bein’ the startin’ places, made two species of cowpunchers.”

Since we’ve covered cowboys and Texas waddies to death, it’s high time we focused on, as Charlie put it, “those west of the Rockies rangin’ north, usin’ center-fire or single-cinch saddles, with high fork an’ cantle; packed a sixty- or sixty-five-foot rawhide rope, an’ swung a big loop.”

You know. Buckaroos. Not the band that played behind Buck Owens, but the Great Basin variety. “These cow people,” Charlie noted, “were generally strong on pretty, usin’ plenty of hoss jewelry, silver-mounted spurs, bits, an’ conchas; instead of a quirt, used a romal, or quirt braided to the end of the reins. Their saddles were full stamped, with from 24- to 28-inch eagle-bill tapaderos. Their chaparejos were made of fur or hair, either bear, Angora goat, or hair sealskin. These fellows were sure fancy an’ called themselves buccaroos, coming from the Spanish word, vaquero.”

Rod Miller was never a buckaroo, but this Western historian, novelist, poet and former rodeo cowboy knows things. To wit:

“Buckaroos are a cowboy subculture. To paraphrase an old saying, all buckaroos are cowboys, but not all cowboys are buckaroos. While the work is much the same wherever cowboys tend cattle, there are differences in the way the work gets done and the tools used to do it.”

In short, buckaroos were influenced by the Spanish vaquero culture, or more specifically, Californio traditions derived from missions and ranches of Mexico and California. Buckaroos also tend to dress a little snazzier.

The best place to start learning about buckaroos is at the Buckaroo Hall of Fame, located at the Winnemucca (Nevada) Convention Center in the middle of Great Basin Buckaroo country.

The Hall of Fame was founded by Carl F. Hammond, who grew up on the Hot Springs Ranch there in Humboldt County, part of a cattle operation that Hammond’s great-grandfather started in the 1800s. These days, Hammond makes a living as a buckaroo artist in Burns, Oregon.

“The Great Basin area was suitable for the buckaroo lifestyle, as the grass to forage cattle was abundant on the high desert corridor,” Hammond says. “Lots of miles of desert rangeland to cover in one day to gather, work and move the cattle to and around the vast grazing lands prompted the intervention and use of a special set of skills.”

Buckaroo country is remote country. As cowboy poet Waddie Mitchell recalls in C.J. Hadley’s Trappings of the Great Basin Buckaroo: “When you’re young, you’re willing to live at places you wouldn’t believe people inhabit. I was a buckaroo because it helped me hang onto tradition, and it meant making a living on horseback.”

To the east, in Elko, the Western Folklife Center is more than just the site of the annual National Cowboy Poetry Gathering, where “buckaroos are as thick as fleas on a coyote,” Miller says.

The exhibit Images of Basques and Buckaroos in the Ranching West runs at the center through September. Basques? You mean sheep in cattle country? Yep, the Western Folklife Center isn’t just about cowboys these days.

“A lot of remote rangeland is still being grazed by cattle operations today, using a more modern version of the buckaroo and keeping many of the older traditions alive,” Hammond says. “The Owyhee Desert and the Owyhee River corridor stretching from near Elko to southern Oregon and Idaho still provide an environment for the buckaroo lifestyle.”

Twin Falls is buckaroo country, and the Twin Falls Historical County Museum in nearby Filer is a good spot to bone up on regional history. Here, you can learn about a black buckaroo.

Henry Harris didn’t just punch cattle. He rose to the ranks of wagon boss and foreman at ranches with names like Vineyard, Middle Stack and Boar’s Nest. In 1894, Harris even got his own land, acquiring 160 acres southwest of what’s now Salmon Falls Reservoir. Around 1930, Harris bought 35 acres near Rogerson.

Harris, by the way, was inducted into the Buckaroo Hall of Fame in 2008.

If you get up to Burns, Oregon, you might find Hall of Fame founder Hammond recapturing the lifestyle of the buckaroos with his silverwork, sculptures, paintings, drawings and, of course, mecates.

That’s what buckaroos use as a lariat.

“The ‘mecate rope’ was one of the vaquero traditions that was adopted by the buckaroos,” Hammond says. It’s a “rope made of horse mane hair hand-twisted of various diameters and used mainly for bridle and hackamore reins. This type of rope and rope-making technique evolved from the Spanish art of rope-making and has been around for centuries. The mane hair is collected from trimming and grooming the horses.”

Our last stop, Pendleton, Oregon, is home of the Pendleton Round-Up rodeo, which has been letting ’er buck since 1910. Shop at Hamley & Co., which started outfitting buckaroos (and cowboys, too) in 1883. Don’t miss Severe Brothers Saddlery, where Randy and Robin Severe continue the legacy started by their father, Bill, and Uncle Duff in 1955. This town’s so Western, Hood River Distillers named its tasty blended whiskies Pendleton and the rodeo shares in the profits from sales.

This town’s home to the Pendleton High School Buckaroos, it’s where you can fill your belly at the Pendleton Cattle Barons Buckaroo BBQ & Home Brew Challenge in May, drop your kid off at the Buckaroo Rodeo Bible Camp in June and where the youth baseball programs teach “the buckaroo way.”

“Travel into the small towns of Nevada, western Utah, south-central and southwest Idaho, southeastern Oregon and parts of California and you’ll likely see buckaroos. They’ll be spotted at out-of-the-way bars and restaurants, stores that sell Western tack and clothing, even grocery stores. Since their work is usually way out of town and far from the highway, you may not see them at work but they’re out there.”

The closest Johnny D. Boggs has ever been to being a buckaroo is sipping Pendleton Whisky—preferably the rye.